The Dow Jones Industrial Average closed down 1,338 points or 6.3 percent – its lowest level since February 2017.

During the session, the 30-share index crossed a milestone, falling more than 7 percent to erase all of its gains since US President Donald Trump took office, before recovering some ground in the final stretch of trading.

The broader S&P 500 – a gauge for the health of US retirement and college savings accounts – closed down 5.17 percent. At one point, the index tumbled more than 7 percent, tripping circuit breakers to halt trading for 15 minutes.

The Nasdaq Composite Index finished the session down 4.7 percent.

Wednesday marked a sharp reversal from Tuesday, when more emergency moves by the US Federal Reserve to unclog credit markets – and details of the White House’s one-trillion-dollar stimulus plan for countering the disruptions of coronavirus – helped lure buyers back into stocks.

Shares of Boeing Co were brutalised again – falling more than 17 percent. The stock is more than 70 percent off of its 52-week high.

Detroit’s big three automakers announced on Wednesday that they will temporarily shutter all US factories. Ford Motor Co and General Motors will also close plants in Mexico and Canada for a limited time.

Delta Airlines announced that it is cutting executive pay and slashing its flying capacity by 70 percent until demand starts to recover from the blow delivered by coronavirus.

The National Restaurant Association is seeking a $455bn government aid package, predicting that the industry could lose $225bn in sales over the next three months to coronavirus, along with five to seven million jobs.

And the US’s biggest mall owner, Simon Property Group, announced that it is closing all of its malls and outlets until at least March 29.

Stocks weren’t the only asset class getting clobbered on Wednesday.

US benchmark West Texas Intermediate crude fell to its lowest level in more than 18 years, touching a session low of $20.06 a barrel before recovering to around $22 a barrel.

Gold, once a safe haven but no longer, also came under pressure, as investors sold the precious metal to unlock cash to cover other losses.

With coronavirus now being reported in all 50 US states, uncertainty over the extent of the economic damage the outbreak will leave in its wake has analysts and economists scrambling to reassess forecasts made less than a week ago and injecting a healthy dose of hedging into predictions for how the second half of the year could shake out.

“The rapid escalation of measures to contain the coronavirus outbreak suggests that the economic damage will be even larger than we anticipated only a few days ago, and we are now pencilling in a 10% annualised decline in GDP in the second quarter.” Andrew Hunter, senior US economist at Capital Economics, wrote in a note on Wednesday. “For now we expect activity to begin to rebound over the second half of the year, but that will depend on the virus being brought under control over the next few months and on Congress stepping up to the plate with a substantial fiscal response.”

Investors are also becoming concerned as more firms draw on credit lines to weather the coronavirus onslaught. And though talk of government stimulus packages and bailouts for certain industries, such as airlines, is intensifying, many analysts are concerned about how politics could slow the delivery of measures.

“The markets are unlikely to be very patient for this process, keeping open the risk that something breaks before politicians come together on a credible deal that sets the stage for a recovery once the virus restrictions start to be lifted,” Steven Ricchiuto, US chief economist at Mizuho Securities USA, wrote in a note on Wednesday. 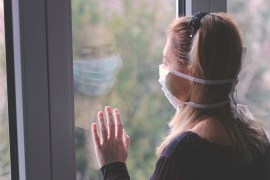 A doctor explains the steps you can take to combat the uncertainty and anxiety surrounding the coronavirus pandemic.