Michelle Goitia usually has 25 mothers and babies in her postnatal yoga class. This week, only four turned up at the studio where she teaches in Brooklyn, New York, as fears about the growing coronavirus pandemic continue to spread across the United States.

New York state has more than 200 confirmed coronavirus cases so far and the governor has declared a state of emergency, which means Goitia expects attendance will continue to plummet – along with her pay.

“I am a teacher at a studio that pays me based on attendance: the more people, the more money I make,” Goitia told Al Jazeera. “I am a private contractor, so if I do not teach or work, I do not get paid.”

Goitia has taught yoga, worked as a doula, led birth workshops and anchored new mother support groups for the past 15 years. That the population she works with is extra vulnerable to illness makes a pandemic like this even harder on her financially.

“My client base is pregnant women, and women that bring their young babies to my class, so I have to be extremely careful to not get them sick as well,” she said.

Across the gig economy, independent contractors such as Goitia are bracing themselves for a drastic drop in income. Ride-share drivers, nannies and carers for the elderly, freelancers, house cleaners, fitness instructors and delivery people are among those who could feel the pinch as their customer base dwindles.

Working ‘close to the line’

Some 36 percent of Americans participate in the gig economy in some way, according to a 2018 Gallup poll and while those gigs offer flexibility, they also have virtually no safety net, says Erin Hatton, an associate professor at the State University of New York at Buffalo.

Now, the widening coronavirus outbreak has shed new light on just how vulnerable workers in this sector are.

“Many of these workers are working very close to the line, they need the hours because they’re low-wage workers and they don’t get paid sick leave,” Hatton told Al Jazeera. “Many of them are also frontline service providers, so that they interact with a lot of people, which means they are potentially exposed and put in a vulnerable position and then also they can expose others.”

Democratic lawmakers in Washington, DC have called for relief in the form of paid sick leave, enhanced unemployment insurance, food assistance and affordable coronavirus testing and treatment for American workers.

And ride-sharing corporations Uber and Lyft, as well as delivery services DoorDash, Postmates and Instacart, are reportedly discussing ways of setting up a fund to help drivers affected by the coronavirus. At least two ride-share drivers have tested positive for the virus in New York.

A Lyft spokesperson told Al Jazeera that the company will “provide funds to drivers should they be diagnosed with COVID-19 or put under individual quarantine by a public health agency,” with the amount of relief based on “the rides they provided on the Lyft platform over the last four weeks.” But the policy doesn’t cover lost income from a decrease in demand or time off to care for a sick family member.

Faced with the prospect of being unable to afford medical care or health insurance and a decline in business, many independent contractors are worried about the financial repercussions.

“The majority of workers in America just don’t have that cushion to go without pay,” Hatton said. “So this provides a really bad incentive during this crisis to continue to work at all costs.”

Public health experts say it is crucial for those experiencing any symptoms to stay home and get tested but that is easier said than done when 27.9 million Americans do not have health insurance, according to the nonprofit Kaiser Family Foundation.

Out-of-pocket medical costs can become an enormous burden for independent contractors as well. The average three-day hospital stay in the US costs about $30,000, according to HealthCare.gov.

But they are not equally affected if they miss work. While 94 percent of company managers had paid sick leave in 2019, just 58 percent of service workers had it, according to the Bureau of Labor Statistics. And only about 4 percent of workers have more than 14 paid sick days per year, the period for which people exposed to the coronavirus are asked to self-quarantine, according to the Economic Policy Institute.

In an address to the nation on Wednesday night, President Donald Trump announced his plan to defer payments on federal loans to small businesses and defer taxes for businesses hit by the virus. Trump has also said he would propose some sort of relief for hourly workers amid the coronavirus outbreak but has yet to put forth a detailed plan.

“The state and the federal governments should provide significant incentives to businesses to provide paid sick leave for all workers, so that anyone who has been exposed to the virus cannot go to work and be OK,” Hatton said.

“This is a point where they could step in and provide this basic social safety net to everyone right now. Because I think it will be absolutely crucial to contain the virus.” 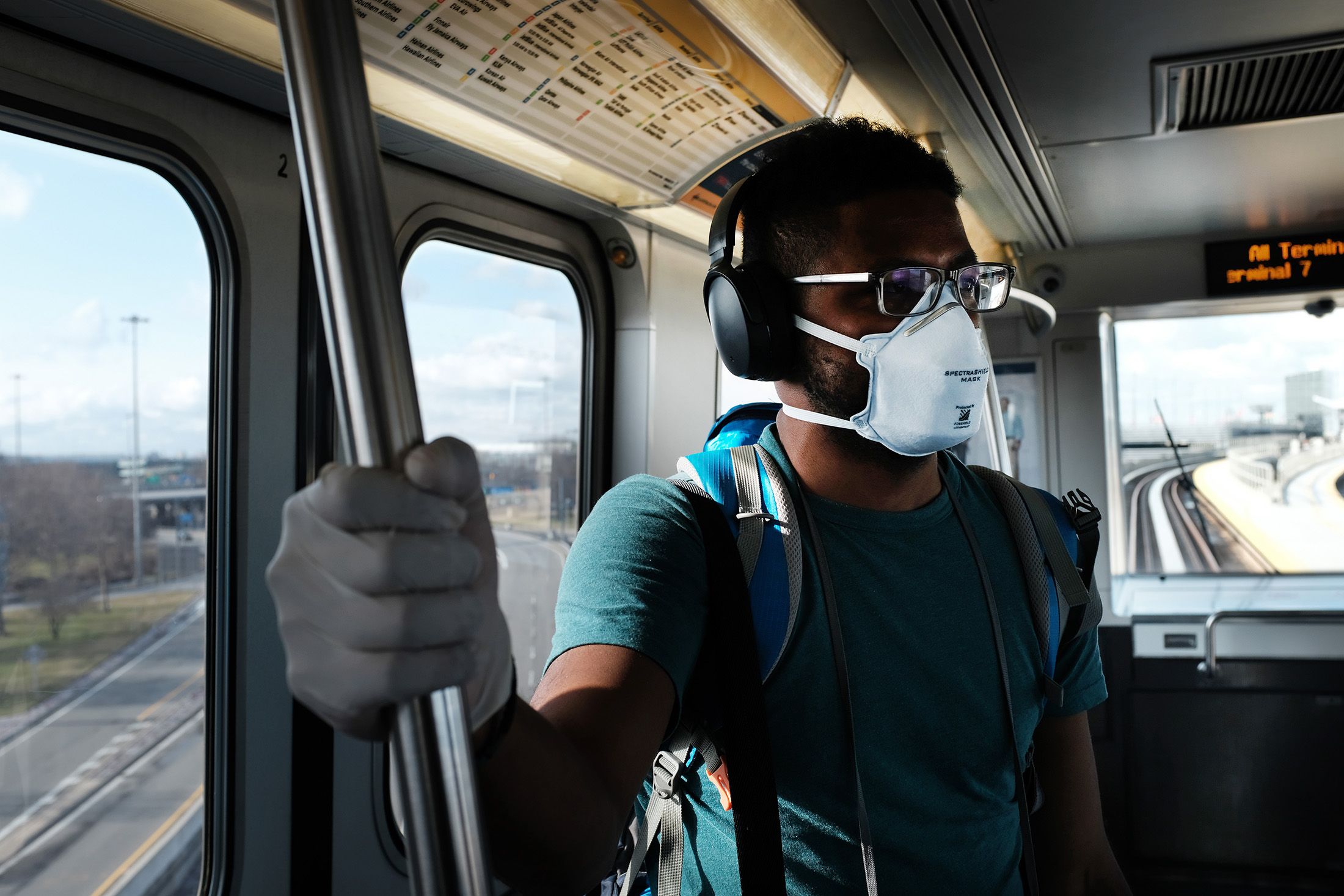 Besides the loss of income from taking sick leave, independent contractors stand a higher chance of contracting the virus – as their jobs could bring them into contact with people who may already have it.

The catch-22 is that people vulnerable to contracting the coronavirus – such as the elderly – could become even more dependent on gig workers. Public health officials in other countries have already advised those with underlying medical conditions to stay home. But it is gig workers who are often the ones responsible for caring for them and delivering food and medicine to their homes.

“A rise in demand for gig work would definitely put gig workers at greater risk, particularly those who provide services such as ride hailing and transportation, home care, house cleaning, other personal services and food delivery,” Maria Figueroa, the director of labour and policy research at Cornell University’s Worker Institute, told Al Jazeera.

But “couriers and delivery workers are more exposed, then, to buildings and individuals who might be infected,” she added.

The outbreak has already changed the way many Americans work and live, with some companies advising people to telecommute and many cities cancelling large public gatherings. Perhaps surprisingly, this has led to an uptick in business for some gig workers.

Rosalia Fiske is an aesthetician who performs facials and waxing in Hoboken, New Jersey. She said she has had more customers book services recently since more people in the small city across the river from Manhattan are now working from home.

“I haven’t felt the burn of the coronavirus yet like the market has,” Fiske told Al Jazeera.

are also frontline service providers, so … they interact with a lot of people, which means they are potentially exposed and … can expose others.”]

Aaron Robinson works 20 to 25 hours per week as an Uber driver in addition to his full-time job at a BMW warehouse.

Robinson lives in Teaneck, New Jersey, where two of the state’s more than two dozen coronavirus cases have been confirmed. New Jersey’s governor recently declared a state of emergency, but Robinson says he has not seen a decline in people hailing rides and he is not worried about the coronavirus. He has paid sick time through his warehouse job.

“I take care of myself. I wash my hands regularly, I hydrate,” Robinson told Al Jazeera.

Uber announced on Wednesday it may suspend the accounts of drivers and riders who have tested positive for the coronavirus or have been exposed to it directly. Robinson said he receives daily emails from Uber with tips on how to keep himself safe.

Robinson said he sprays down his car at the end of each day, and since the outbreak began, he has picked up several physicians, using those rides as an opportunity to ask them questions about the virus.

“I can’t control the coronavirus, so I do the best I can to do what I’ve got to do.”

It is the uncertainty of how much the virus will spread – and how much it will disrupt daily life – that has made many gig workers worry.

Fiske, the aesthetician, said if more people were urged to self-quarantine – or discouraged from touching their faces – it could hit her business hard, which is why she spent this week posting on social media about the “extra precautions with hygiene and sanitary conditions” she is taking, including using a hospital-grade antimicrobial cleaner to disinfect her materials.

Fiske said after Hurricane Sandy devastated Hoboken in 2012, she learned to save and has enough in the bank for a few months to keep her afloat.

Goitia, the yoga teacher, said she tries to keep two months’ expenses in her savings account.

But not everyone has such a cushion. A recent study by the Federal Reserve found that nearly 40 percent of US households would struggle with an unexpected $400 expense, let alone go weeks or months without income.

The outbreak may be drawing much-needed attention to the necessity for better protections for gig workers, Cornell’s Figueroa says.

“It might change people’s minds about the need for healthcare access for gig-workers, as it’s now a public safety issue, not purely social justice,” she said. “If they’re safe, we are all likely to be safe, too.”

Hatton agreed, saying she would like to see many of the social benefits we rely on “decoupled from employment, so that people have full access to affordable health care, regardless of whether their employer offers it”. Federal sick leave for all would help, too.

“That could potentially be a silver lining that comes out of this very dark cloud, because people are talking about and thinking about the many, many workers who just can’t afford to take time off if they contract it,” Hatton said. “That’s new. That has not been a part of our national conversation or our national thought process before.”