Bali, Indonesia – As fears over the coronavirus, also known as COVID-19, continue to dominate the headlines, a second virus affecting China’s swine industry is also spreading throughout the Asia Pacific region, threatening not only the lives of the affected animals but also the livelihood of farmers who raise them.

African swine fever (ASF) is a contagious disease that affects domestic and wild pigs, causing high fever, respiratory problems, internal bleeding and skin haemorrhages. While it rarely infects humans, according to the World Organisation for Animal Health (OIE), it kills 80 percent of the pigs it infects.

The disease is resistant to freezing, thawing and most commercial disinfectants, and there is no vaccine for it. It can spread through non-biological objects like shoes and clothing.

Last year, ASF wiped out 60 percent of domestic pigs in China and a quarter of all domestic pigs in the world, according to estimates by contagious disease experts, running into billions of dollars worldwide.

In Taiwan, dead pigs carrying ASF have washed up on its beaches, while in the Philippines, tens of thousands of infected pigs have been killed or culled since September 2019.

In South Korea, photos have emerged of a river turned red by blood from mass culls at pig farms and in Indonesia’s province of North Sumatra, authorities confirmed some 5,000 pigs died from the virus last year.

Now ASF, which originated in Kenya, has likely reached the Indonesian island of Bali, where the impact could be severe, experts said.

A staple in Bali

Unlike the rest of Indonesia, where pork is not a staple, pigs play a vital role in the economy, community and religion of the Hindu-majority island, which is already reeling from the overnight loss of a quarter of its foreign tourists after flights from China were banned earlier this month to prevent the spread of coronavirus.

But the owner of one of the largest meat processing factories in Bali told Al Jazeera on condition of anonymity that ASF was “obviously” the cause.

“I am absolutely sure it’s swine fever because it’s spreading in the region so it’s the most obvious cause. But it’s not a big issue because the only way for it to infect humans is to be working in a piggery and even then it’s extremely rare,” the owner said.

“The biggest impact of swine fever is economic, and pig farmers could lose all the money they’ve spent on feeds.”

Nyoman, a pig farmer in Munggu Village, told Al Jazeera all but three of his 64 pigs have died from a mysterious illness.

“The government came here and advised me not to sell the dead pigs, to bury them, and to disinfect everything,” said Nyoman who, like many Indonesians, goes by one name only.

“They said they’re still examining the cause but I think it’s ASF because farmers in other villages are saying their pigs had similar symptoms.”

Nyoman’s last remaining adult pig is now showing some of the same symptoms: the animal has not eaten in days, is lethargic and breathing heavily.

“I tried treating my pigs with antibiotics and vitamins like B-complex and zinc but it didn’t work. This pig will die sooner or later and then her piglets will die too,” he said.

“How will I survive? I haven’t thought about it yet. I’ve only been in this business for a year and I borrowed lots of money to set it up.”

Suci Ernawati, another Muggu Village pig farmer whose animals are dying, also suspects ASF is the cause.

“Two of my 10 pigs suddenly got sick with high fevers and died. The symptoms are a little different so we don’t know for sure what it is. But people are saying it’s ASF.”

Last last year, ASF was detected in East Timor, which lies only 650km (404 miles) northwest of the Australian city of Darwin.

Victoria state’s agricultural department Victoria described the outbreak in East Timor as “significant because it represents the closest outbreak of this exotic disease to Australia since the first Asian diagnosis in China.”

Director of the Australian Animal Health Laboratory, Trevor Drew, said the virus is now perfectly positioned to penetrate Australia, where it could have devastating effects on the country’s meat export business.

“We are very concerned, so our border controls and our surveillance has really been ramped up, to do our very best to keep the disease out of the country,” he said.

The professor added that “nearly 50 percent” of meat products tourists had tried to sneak past customs at Australian airports had tested positive for ASF and that many of those individuals were refused entry as a result.

Drew said he has been warning authorities in China about ASF since 2009 but his words fell on deaf ears.

“Knowing about the way pigs are raised in Asia by subsistence farmers in backyard sites, where there’s very little in the way of biosecurity measures, it was inevitable ASF was going to spread.”

To contain the virus, he adds, “it’s absolutely critical that any country that has it confirms and declares it promptly”.

But in Bali, authorities appear more focused on containing the public relations fallout, with an “It’s safe to eat pork” campaign being unrolled throughout the island.

The OIE said the risk of humans being infected with ASF through the consumption of pork products is “negligible”.

Still, many in Bali are not prepared to take the risk.

“I think pork that has been approved by the government is fine but, for now, my family won’t eat it,” Nyoman, the pig farmer from Munggu village, said. His neighbour Suci Ernawati is also abstaining.

Business is also reportedly slow among restaurants selling “babi guling”, Bali’s iconic suckling pig, which is prepared for Hindu ceremonies, weddings and the like.

According to the staff at Babi Guling Selingsing Bu Suci, a shop near Munggu, customers have been scarce since the swine fever scare began.

While they insist that their supply is safe, they are worried that the situation could become worse in the weeks and months to come if the problem is not addressed. 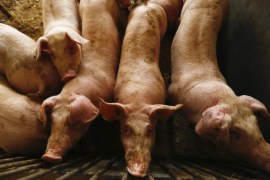 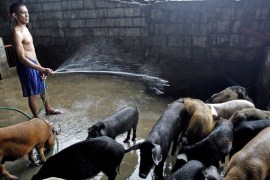 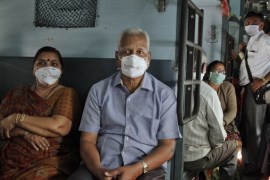 BJP official among more than 1,000 tested positive so far this year for H1N1 virus that wreaked global havoc in 2009.