The rand declined as much as 0.7% to trade above 15 per dollar for the first time in a week. Yields on benchmark 2030 government bonds rose four basis points to 8.9%.

Moody’s, which is scheduled to review South Africa’s Baa3 credit rating in March, said the country’s lackluster economic performance was due to domestic challenges rather than external factors such as the coronavirus. A downgrade by Moody’s would see South Africa lose its place in investment-grade indexes, sparking outflows from its bond and stock markets. 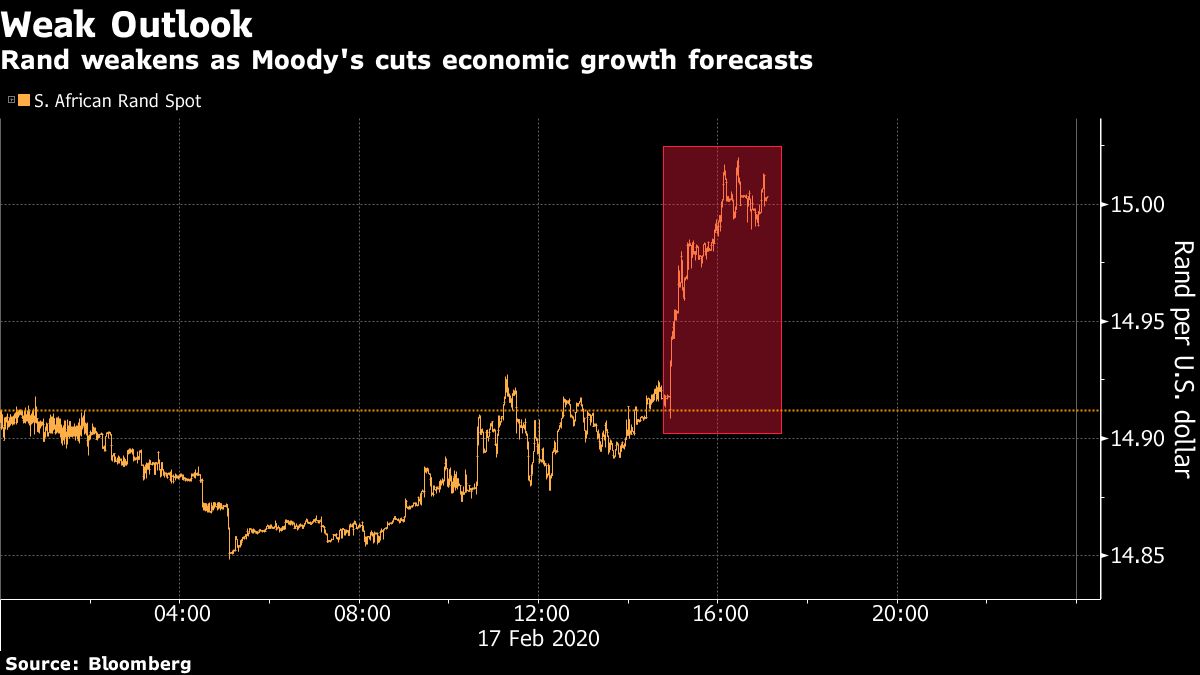 “Markets are betting that this could be a precursor to a downgrade into junk at the March review, which follows next week’s budget,” said Christopher Shiells, an analyst at Informa Global markets in London. “However, the Treasury may be able to buy itself more time with a statement that outlines credible steps toward fiscal and general economic reform.”

Recent economic indicators suggest that industrial activity in South Africa remains weak amid low business and consumer confidence, while recurring power outages have weighed on manufacturing and mining output, Moody’s said in a report. The company lowered its forecast for gross domestic product growth to 0.7% in 2020, from 1%, and predicts expansion of just 0.9% in 2021.

South Africa’s relatively high real interest rates are bolstering the rand while constraining economic growth, Moody’s said. While the central bank reduced its policy rate by 25 basis points in January, the real rate, which adjusts for inflation, remained above 2%, higher than the GDP growth rate.

“It’s not a huge surprise,” said Paul McNamara, a fund manager at GAM Investment Management in London. For South Africa, “it’s a long death march rather than anything more spectacular. We’re reluctant to own a lot of rand, but the bonds look priced for a lot of bad news already.”

While the country may avoid a credit downgrade in March, much hinges on the government’s commitment to curb spending and consolidate debt. That would require capping the public-service wage bill in the face of opposition from labor unions.

“A downgrade will happen anyway for lack of reform reasons rather than what forecast numbers are,” said Peter Attard Montalto, head of capital-markets research at Intellidex in London.