Tuesday marks 40 years since music legend John Lennon was shot and killed outside of his apartment building in New York City by a crazed fan hours after the former Beatle had autographed an album for him.

In years past, fans have poured in from around the world to sing, leave flowers and remember Lennon at the memorial to him in New York City’s Central Park, near where he lived with his wife, artist Yoko Ono, at the time of his death.

In honour of Lennon’s legendary music, here are some of the biggest numbers from his life and legacy.

The tally of number-one hits by the Beatles, still the most of any band, according to Billboard. The Fab Four racked up 34 Top 10 hits during their time together. Lennon and his bandmate Paul McCartney penned the majority of the group’s songs.

The number of number-one hits written by Lennon during his solo career, according to Billboard. He also had eight Top 10 hits of his own.

The amount of time Lennon and Ono staged their “Bed-ins for Peace”, a protest held entirely in hotel beds in Amsterdam and Montreal. Lennon devoted much of his later life to peace activism.

How old the singer-songwriter would be today. Lennon was born on October 9, 1940 in Liverpool, England.

The number of monthly listeners for Lennon’s music on the streaming music service Spotify.

Imagine is his most-listened-to song with more than 306.8 million streams on the platform, followed by the song Happy Xmas (War Is Over), with 235.4 million streams.

The number of views a newly remastered version of Happy Xmas (War is Over) has racked up since it was posted to YouTube on November 20. The video features photos of Lennon and his family as well as the Harlem Community Choir.

Ono shared the video on Twitter, writing it would bring “all the warm fuzzies of the holiday season”.

♫ And so this is Christmas…🎶
The newly remastered version of the 1991 video for HAPPY XMAS (WAR IS OVER) by John & Yoko, The Plastic Ono Band with The Harlem Community Choir is premiering now, bringing all the warm fuzzies of the Holiday Season.https://t.co/5fq9A7VVvJ

The price the guitar Lennon played on the Beatles’ first single, Love Me Do / PS I Love You, fetched at Julien’s Auctions in 2015. The Gibson J-160E went to a bidder who wished to remain anonymous.

The price paid for a pair of Lennon’s signature wire-framed sunglasses from 1968 at a Sotheby’s auction in 2019.

Another pair of Lennon’s glasses went on the auction block in September. The round Windsor spectacles fetched 44,100 British pounds, about $59,000, according to Sotheby’s.

The number of times the man who killed Lennon, Mark David Chapman, has been denied parole, most recently in August.

In a transcript of that parole hearing, Chapman said he sought “glory” by killing Lennon, towards whom he felt “angry and jealous” because of Lennon’s wealth, music and lifestyle, according to ABC News. Chapman remains in prison to this day. 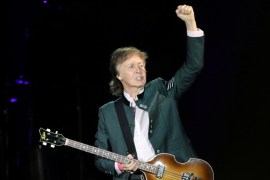 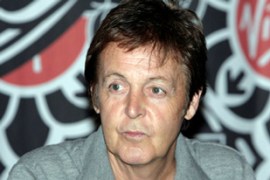 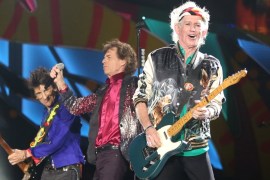 Music legends perform at free concert in Havana, in what some see as a sign of the country further opening to the West. 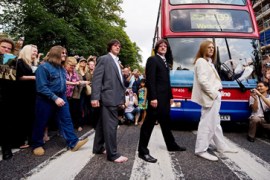