The U.S. regulator has “inexplicably decided to sue Ripple,” the firm’s Chief Executive Officer Brad Garlinghouse said in an emailed statement. He didn’t specify the exact nature of the lawsuit but asserted XRP is a currency and “does not have to be registered as an investment contract” — a reference to the longstanding debate over whether XRP is a security and subject to regulatory disclosures.

“The SEC has permitted XRP to function as a currency for over eight years,” he said. Ripple will challenge the suit in the courts “to get clear rules of the road for the entire industry in the U.S.,” he added.

XRP fell as much as 13%, touching the lowest level in about a week. The token has a market value of about $21 billion, making it the largest cryptocurrency after Bitcoin and Ether, according to CoinMarketCap data. The lawsuit has yet to appear on a list of litigation releases on the SEC website. 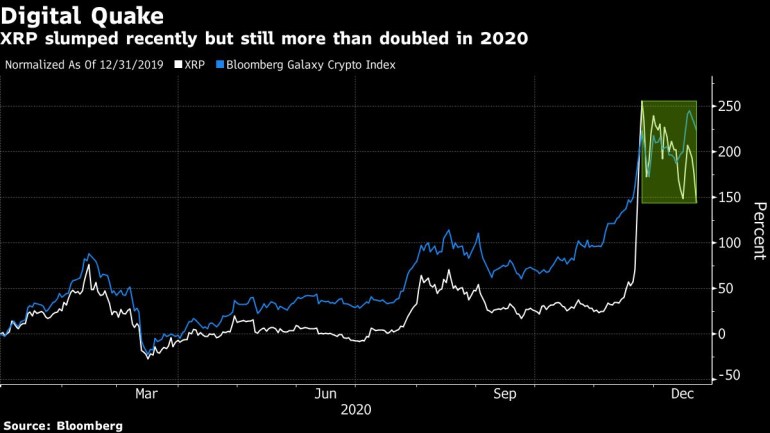 “The SEC should not be able to cherry-pick what innovation looks like,” Garlinghouse said in a tweet from his verified account. “This battle is just beginning.”

Ripple earlier this year also failed to persuade a judge to throw out a proposed class-action lawsuit accusing the company of selling unregistered securities.

A request for comment from the SEC press office wasn’t immediately returned.

The SEC – out of step with other G20 countries & the rest of the US govt – should not be able to cherry-pick what innovation looks like (especially when their decision directly benefits China). Make no mistake, we are ready to fight and win – this battle is just beginning. (3/3)

The SEC said in July 2017 that companies which raise money through the sale of digital assets must adhere to federal securities laws. Whether Ripple is a security has been at the center of debate within the sector since the SEC comments.