By Michael G. Wilson and Jill Ward and William ShawBloomberg

Concerns about a new strain of coronavirus in the U.K. drove the British pound to its biggest loss since March, though the currency pared much of the loss after Prime Minister Boris Johnson made another offer to salvage Brexit talks.

Investors were spooked earlier as another Brexit deadline went past without results and Britain’s biggest port in Dover stopped all traffic heading to the continent, threatening the U.K.’s supply chains with Europe. The currency’s one-week implied volatility was the highest for a Christmas period in more than a decade.

Expectations of monetary easing by the Bank of England mounted, with money markets bringing forward bets for a 10-basis-point interest-rate cut to September, compared with March 2022 on Friday. Ten-year bonds rallied, with yields slipping as much as nine basis points, and the FTSE 100 share index fell as much as 3.3%. While the slump also reflected the dollar’s strength, the U.K. currency also fell against the euro, with the shared currency rising as much as 1.7% to 92.17 pence. 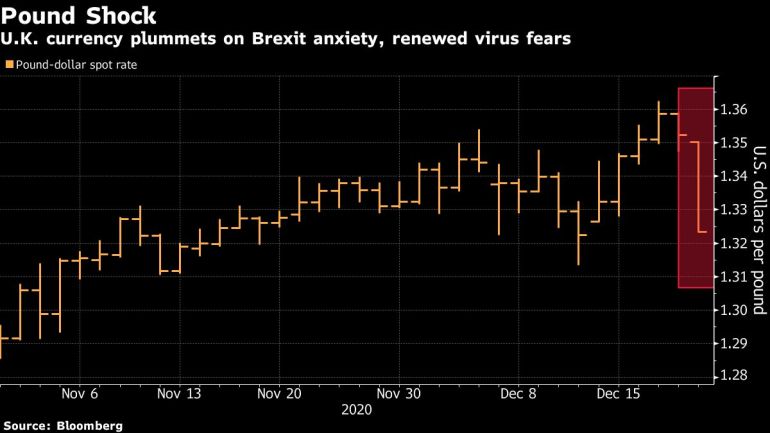 “All of this is unwelcome news, at a time where there was already plenty to be concerned about,” said James Athey, a money manager at Aberdeen Standard. “Markets are, in general, overly complacent about the risks out there. The pound is no exception.”

The risk that Britain could drop out of the European Union at year-end without a trade agreement has been compounded by the prospect of immediate delays to food supplies after a new strain of Covid-19 was discovered in Britain. Prime Minister Johnson detailed new restrictions for London and the southeast, while several countries suspended inbound travel from the U.K.

“Once you layer Brexit on to this chaos, and now the closure of Dover, I can’t see how we can avoid some disruption in the supply of perishables,” said Jane Foley, head of foreign exchange strategy at Rabobank, adding that a no-deal scenario could see the euro rise to 95 pence or higher. “The pound will remain sensitive to Brexit-related news in the days ahead.”

The moves mark a turnaround after sterling rose last week to its highest in nearly five months, on a weaker dollar and speculation that a deal might be reached on Sunday, a deadline set by the European Parliament.

In his latest offer late Monday, Johnson argued the EU should reduce the value of the fish it catches in U.K. waters by about a third, after insisting last week that the EU accept a 60% cut. Johnson had said earlier in the day that leaving the EU without a free-trade agreement would be “entirely satisfactory.”

The relative cost of hedging a weaker sterling over year-end touched its highest since the height of the coronavirus panic in March, and was the most expensive among major currencies. 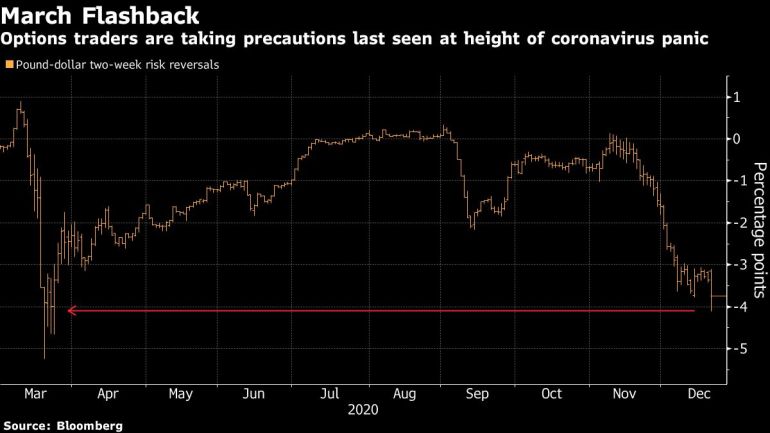 “The scope for the pound to rally materially on the back of a breakthrough on trade appears to be shrinking against the backdrop of news-flow relating to Covid and supply disruptions,” said Mark Dowding, the chief investment officer at BlueBay Asset Management LLP who oversees $70 billion overall.

More than 16 million Britons are now required to stay at home as a full lockdown came into force Sunday in London and southeast England, part of Johnson’s effort to contain an “out of control” new strain of the coronavirus.

The latest outbreak is likely to result in tougher economic restrictions to be put in place for longer, said Lee Hardman, a strategist at MUFG.

“The deeper, slower and more protracted slowdown will increase pressure on the BOE to implement negative rates,” he said. “It increases downside risks for the pound, even if there is a last-minute Brexit trade deal.”

The pound has tracked every development in Brexit since the June 2016 referendum to leave the EU. One major sticking point on is access to the U.K.’s waters for fishing. The fishing industry accounts for just 0.1% of U.K. gross domestic product, but is of high political significance, with Johnson’s government seeing it as a symbol of national sovereignty.

If a trade agreement isn’t struck by the end of the month, decades of free movement of goods, services, people and capital will come to an abrupt end. British firms would revert to trading with the EU under rules established by the World Trade Organization.

That means imports and exports to the EU would be subject to WTO-negotiated tariffs — essentially a tax on goods. The pound could fall to $1.25 by the middle of next year if no trade agreement is agreed, according to analysts in a Bloomberg survey.

“It’s going to be a tricky week for U.K. investors,” said Ned Rumpeltin, European head of foreign-exchange strategy at Toronto-Dominion Bank. “But potential for a Brexit deal still remains on the table. That could see the overnight declines reverse just as quickly if we do get some positive movement.”