By Claire Jiao and Grace SihombingBloomberg

Indonesia will need to step out of the shadows of neighboring Malaysia’s 1MDB scandal to convince investors that its new wealth fund won’t fall prey to corruption.

Nusantara Investment Authority will take lessons from other sovereign wealth funds and adopt a framework based on independence, transparency and accountability, said Isa Rachmatarwata, the finance ministry’s director general of state assets. It needs to assure potential investors that governance protocols are airtight when it starts operations in the second half of 2021, as the fallout from the 1MDB scandal has heightened scrutiny on emerging-market wealth funds.

“The region has had a bad name after 1MDB and people will think of that — how a similarly well-intended fund can go so wrong,” said Bank of America Securities economist Mohamed Faiz Nagutha. While Indonesia’s fund has attracted $6 billion of pledges from the Japan Bank for International Cooperation and the U.S. International Development Finance Corp., it could be a tougher pitch for private investors, he added.

Neighboring Malaysia is still working to recover the $4.5 billion missing from its state fund, with investigations that have led to a massive settlement with Goldman Sachs Group Inc. and a 12-year prison sentence for former prime minister Najib Razak.

Indonesia seeks to raise 225 trillion rupiah ($16 billion) by offering global and local investors the chance to put their money in Nusantara Investment Authority’s sub-funds spanning infrastructure, healthcare, tourism, technology and the development of the new capital city. The pandemic’s impact has sapped state revenue in Southeast Asia’s largest economy, and President Joko Widodo is betting on big-ticket projects to help drive a turnaround for 2021.

“While this is a positive step as it provides investors the flexibility to invest in various projects previously delegated to many state-owned enterprises, its success will depend on investors’ confidence on governance,” said Chua Hak Bin, senior economist at Maybank Kim Eng Research Pte.

Safeguards are built into the fund’s framework. It will be run by professionals on its board of directors, have an advisory team comprised of representatives from major investors, and be subject to audit by an internationally reputable accounting firm, said finance ministry’s Rachmatarwata. The management team can only be dismissed based on specific grounds, as a way to shield them from outside pressure in making investment decisions, he added. 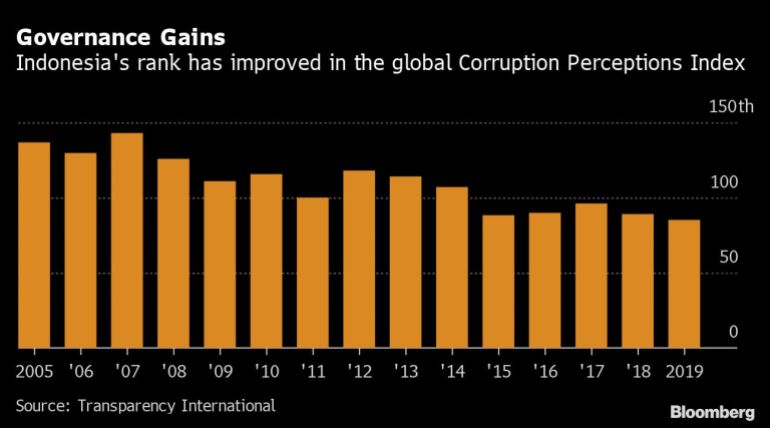 Indonesia has made significant strides in putting its house in order, with its Corruption Eradication Commission setting a track record of going after high-profile cases. Transparency International boosted the country’s ranking to 85th out of 180 countries in its 2019 Corruption Perceptions Index, from 111th a decade ago.

Still, concerns resurfaced in the wake of investment irregularities uncovered in January that’s pushed a state insurer to the brink of financial collapse, said Danang Widoyoko, Transparency International Indonesia’s secretary general. The wealth fund’s framework is worrying as it would further relax investment rules around state-owned enterprises and it wouldn’t be subject to probes by the nation’s Supreme Audit Board, he said.

A professionally-run board isn’t enough assurance that the fund won’t be politicized, as business and government officials typically move from one sphere to another in Indonesia, Widoyoko added.

“Business and politics are just different sides of the same coin,” he said.