It is the news Wall Street investors have been waiting for in earnest.

On Monday, drug companies Pfizer and BioNTech announced that their COVID-19 vaccine candidate had proven more than 90 percent effective in a phase-three clinical trial.

The announcement triggered a wave of optimism that washed through global markets and beyond.

The big hope is that Big Pharma is on the cusp of defeating a once-in-a-century pandemic that has killed more than 1.2 million people globally, ravaged livelihoods, decimated industries and worsened inequality between and within nations.

The major US stock indexes obliged, with the Dow and S&P 500 both rocketing to new records at the open of trading in New York.

Shares in companies most beaten down by the coronavirus crisis – such as airlines and cruise operators – soared as investors bet that the promise of a vaccine could soon reorient consumer behaviour back to pre-pandemic patterns.

Meanwhile stock in firms that have benefited most from shifts to remote work and schooling- such as big tech and video conferencing – took a knock.

The divergence is not surprising, given that investors keep their heads above the parapet, positioning portfolios in anticipation of where they think the economy is heading.

Where the economy is now, though, is the chief concern for Main Street, as well as the man US voters have chosen to become their next president.

In a harbinger of what promises to be a more circumspect administration, President-elect Joe Biden’s response to the news was markedly lower-case in contrast to Trump’s all-caps tweet, describing the Pfizer development as “positive news” while urging Americans to remain vigilant and keep wearing masks.

“It’s clear that this vaccine, even if approved, will not be widely available for many months yet to come,” Biden said during a press conference on Monday. “The challenge before us right now is still immense and growing”.

Managing expectations for promising vaccine candidates is more than warranted.

The damage COVID-19 has inflicted on the economy that Biden is inheriting has been profound, and spiking infections in Europe and across the US have ushered in more business-sapping restrictions.

Some $3 trillion worth of federal lifelines Congress threw to workers and struggling firms earlier this year expired over the summer. And if Washington does manage to break its partisan deadlock to pass a new round of virus relief aid near the end of the year, many analysts expect it to be a skinny package worth roughly $1 trillion.

Many economists blamed Congressional stinginess for prolonging the recovery from the Great Recession of 2007-2009. Concerns have been festering for weeks that a delayed or insufficient new round of stimulus measures could tack even more miles on to the economy’s march back to health.

Low-wage service workers, minorities, women and youths have borne the brunt of the pandemic’s economic fallout. And the longer the health crisis drags on, the greater the risk that those who have been most economically disenfranchised by it may not reclaim their financial footing.

Some 10 million of the 22 million jobs lost to lockdowns this spring have yet to be recovered. Though the unemployment rate in October fell to 6.9 percent, that is still nearly double February’s pre-pandemic level.

There are myriad signs the recovery is downshifting in the closing three months of the year.

More temporary layoffs are becoming permanent job losses. The number of Americans working part-time who want a full-time job shot up by 383,000 last month to 6.7 million.

Nearly one in three renters in the US started October in arrears. And if that maths weren’t brutal enough, protections like the US Centers for Disease Control and Prevention’s moratorium on evictions are set to expire at the end of the year.

Dark winter indeed. But the darkness is not falling equally on all Americans.

Those who were able to keep working during the pandemic and who own assets – like houses and stocks – have not only been bathed in financial sunshine, but could close out the year richer than were at the start of it.

Neither of those risks has gone away, despite Monday’s vaccine news.

So while Wall Street may be seeing slivers of light at the end of the pandemic tunnel, millions of people on Main Street are still too deep in the COVID hole to feel the warmth of a promising vaccine. 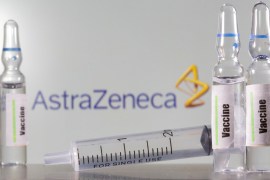 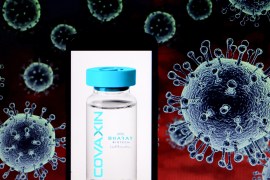 Bharat Biotech, a private company, is developing COVAXIN with the government-run Indian Council of Medical Research. 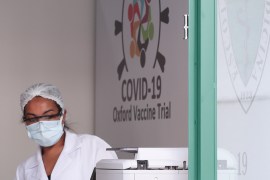 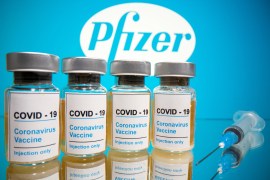 Everything you need to know about Pfizer’s COVID-19 vaccine

Reported breakthrough in vaccine race welcomed by scientists and leaders, but experts caution many questions remain.