Wall Street’s main stock indexes extended their post-election rally on Thursday as investors bet that if Democratic presidential candidate Joe Biden wins the White House, his plans to tighten regulations and increase taxes would be blocked by a Republican-controlled Senate.

With presidential election votes still being counted, the Dow Jones Industrial Average closed up more than 542 points or 1.95 percent at 28,390.18.

The S&P 500 – a gauge for the health of US retirement and college savings reports – gained 1.95 percent, while the Nasdaq Composite Index kept powering ahead to finish the session up 2.59 percent.

Trump holds a lead in Georgia, Pennsylvania, and North Carolina and has urged those states to be called in his favour.

We have claimed, for Electoral Vote purposes, the Commonwealth of Pennsylvania (which won’t allow legal observers) the State of Georgia, and the State of North Carolina, each one of which has a BIG Trump lead. Additionally, we hereby claim the State of Michigan if, in fact,…..

On Wednesday, the president wrote on Twitter that he had claimed “for Electoral Vote purposes” Pennsylvania, Georgia and North Carolina, “each one of which has a BIG Trump lead”.

The Trump campaign, which has alleged election fraud, has filed lawsuits against several states and called for a recount of votes in Michigan.

While any delay in the election’s outcome could mean weeks of partisan fighting, the government is likely to be highly divided even after Trump or Biden takes the White House keys for the next four years.

Democrats appeared unlikely to win the Senate, which deflated expectations of the government coming together soon to pass a hefty stimulus package to keep the economic recovery on track and throw a financial lifeline to millions of jobless workers and struggling small businesses.

On Wednesday, the Republican Senate Majority Leader Mitch McConnell said he wanted a coronavirus relief bill by the end of the year.

But Wall Street analysts expect the next stimulus package to be far slimmer than $2.2 trillion that House Democrats were pushing for.

The need for more help for Main Street was underscored on Thursday after the US Department of Labor reported that the number of workers filing new claims for unemployment benefits from states fell slightly last week to 751,000 – which is still higher than pre-pandemic levels.

Federal Reserve Chairman Jerome Powell also said on Thursday what while the economy has made significant strides since being knocked sideways by the pandemic, the pace of recovery is “moderating” and economic growth and jobs creation are still well below pre-pandemic levels.

Among stocks making headlines on Thursday:

Chipmaker Qualcomm surged 12.74 percent after it forecast fiscal first-quarter revenue above Wall Street’s expectations as it predicted sales of 5G smartphones would balloon to more than half a billion units next year, powered in part Apple’s new iPhone 12 models. 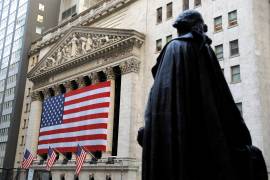 Dow closes up 360 points as US election vote count continues

United States stock markets rally as odds of a much anticipated Democratic ‘blue wave’ sweep are all but crushed. 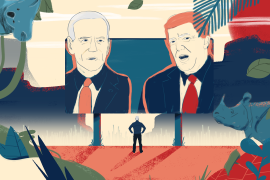 The 2020 US elections: A climate for change?

Based on the last five years of climate talks, many fear a Trump re-election will halt efforts to end global warming. 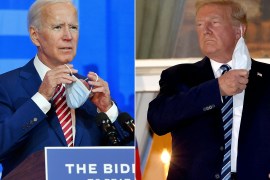 With just two days of campaigning left, the candidates are doubling down in key battleground states.