Turkey’s coronavirus-battered economy fared far better than all peers in the third quarter, driven by a stimulus campaign that sacrificed the lira and price stability.

Gross domestic product last quarter rose 6.7% from a year earlier, after shrinking 9.9% in the previous three months, according to data released on Monday. The median of 14 forecasts in a Bloomberg survey was for 4.8% growth. The seasonally and working day-adjusted figures showed an expansion of 15.6% in the third quarter from the previous three months.

The $736 billion economy outperformed all Group of 20 nations including China, thanks in part to a combination of interest-rate cuts, fiscal spending and a government-led credit push. 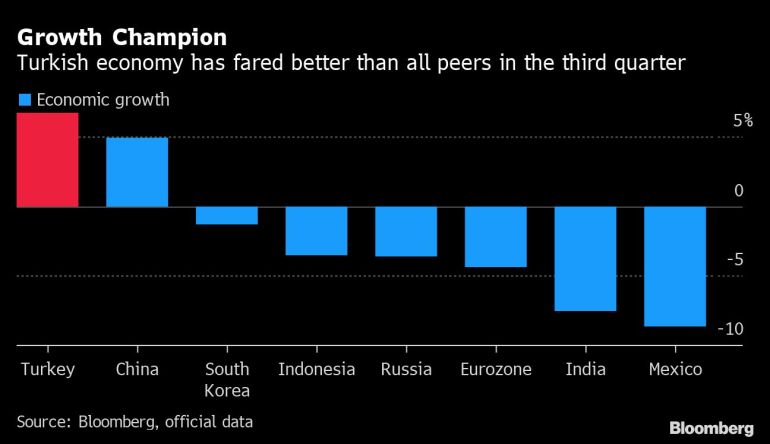 Below are some of the highlights of the GDP report released by the state statistics institute in Ankara:

To help businesses and consumers ride out the the pandemic, the Turkish government pushed banks to ramp up lending. Loan growth remained robust throughout the summer, slowing toward the end of the third quarter.

What Our Economists Say…

“Activity will slow in 4Q on higher interest rates and a surge in the rate of Covid-19 infections. We expect growth to be around zero this year, before advancing to 4% in 2021.”

At the same time, the central bank injected liquidity by scooping up government bonds, and delivered 1,575 basis points of easing until rate cuts stopped in June, leaving Turkey’s inflation-adjusted borrowing costs among the lowest in the world. The weighted average cost of funding dropped as low as 7.34% in July, then started growing for the rest of the quarter to end at 11.1%. 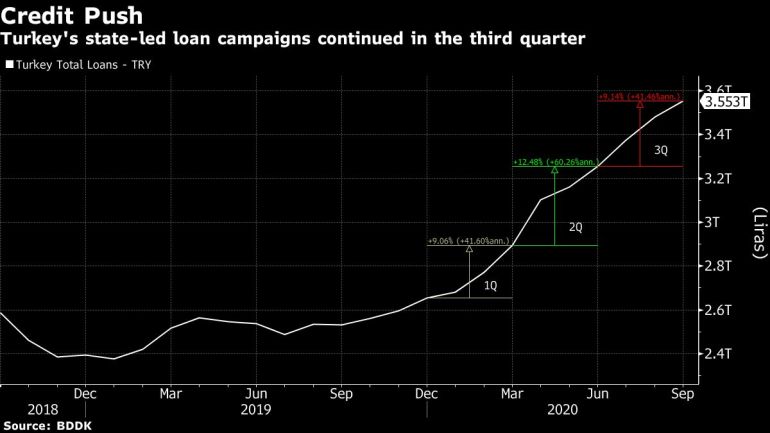 With the lifting of most virus-related restrictions imposed in the previous quarter, domestic tourism gained pace, and airports were opened to most foreign tourists.

The picture for the fourth quarter is less rosy as Turkey began reimposing limitations following a virus surge and replaced its central bank and economy chiefs. President Recep Tayyip Erdogan pledged to support his new economic managers with “bitter-pill” policies that conflict with his views — but only after the currency hit record lows, keeping headline inflation in double digits. The lira has lost 24% against the dollar this year.

The central bank’s new governor, Naci Agbal, started his tenure by raising interest rates by the most in over two years, a move that could damp demand.

“Turkey’s main trading partners across Europe lost momentum in the fourth quarter due to various restrictions imposed to regain control over the coronavirus pandemic,” said Piotr Matys, a strategist at Rabobank in London.

Accordingly, “exports are likely to contribute less to growth in the fourth quarter than in the third at a time when private consumption will be curtailed by slowdown in credit growth.”

(Updates with chart and analyst comment in the final paragraph)
–With assistance from Harumi Ichikura.