Far fewer women than men are promoted in the finance industry unless they first ask for seniority, a sign of institutional gender bias, according to a new study in Australia.

The survey of 2,000 finance industry professionals showed 76% of men were offered a promotion at least once without requesting it, compared with 57% of women. The study was compiled by lead researchers Ardea Investment Management and Australian National University in conjunction with industry experts.

The findings provide “evidence of that culture that things come to men without asking,” said Bronwen Whiting, who worked on the survey and is a senior lecturer in applied statistics at the university. “It can’t all be on women to act differently to fix it.”

Australia is among the countries that can claim some success in tackling gender inequality. For example, a report by consultancy Kearney this year showed Australia tops the U.K., U.S. and India for the proportion of female parliamentarians and women board members in its top 100 firms. Yet the latest survey’s results show ongoing gaps, including the fact that male fund managers on average earn more than twice as much as female counterparts. 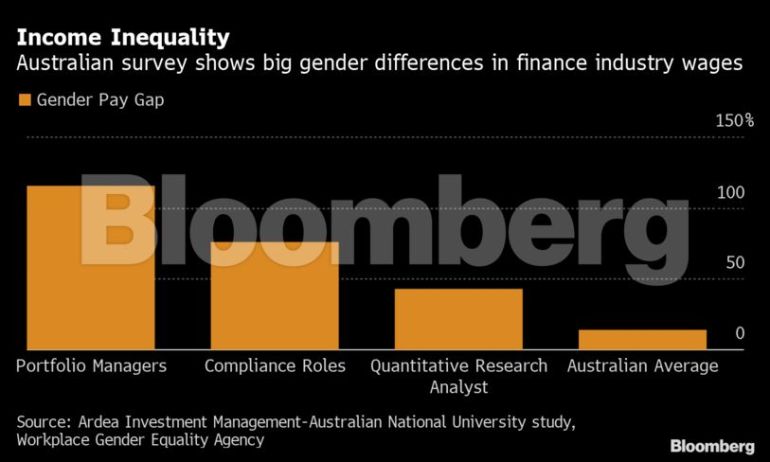 Male quantitative research analysts are paid 43% more than women, and men in compliance roles received an additional 76%, based on 2019 data. Official Australian figures put the overall gender pay gap at 14%. In the U.K., the gap in financial services is well over 20%, according an analysis of government data.

The Ardea-Australian National University study found that women asked for pay increases and promotions at the same rate as men, and when they do so, there was no difference between the genders in terms of receiving them. Yet the gap appeared when companies took the initiative with promotions.

“One of the arguments put forward as to why women are paid less is that we are too agreeable,” Laura Ryan, head of research at Sydney-based Ardea, said in an interview. “Looks like we are being assertive, but if we are not we definitely miss out. Gender is a strongly significant factor in determining salary.”

Glass ceilings and salary disparities due to gender remain persistent problems globally in the finance industry. Overall, women also face a disproportionate risk of losing their jobs in the wake of the pandemic, according to the Organisation for Economic Co-operation and Development.

Women were already falling behind in saving for their retirement compared to men because of existing inequality, and the aftermath of Covid-19 could exacerbate the problem, Ryan said.

Australian National University’s Whiting said she hoped executives will acknowledge that progress has been slow and “it’s not something that we can talk about once a year on International Women’s Day and then forget about it.”

Ryan said many colleagues in the finance industry believe there is no gender gap, adding that “while there is all this unconscious bias training and everyone seems to think that the problem is fixed, the results show that it’s definitely not fixed and we still have quite a way to go.”