African countries face another debt crisis and will need more long-term help than the latest G20 debt plan offers them to ward off trouble and keep much-needed investments coming in, according to policymakers, analysts and investors.

Approximately 40 percent of sub-Saharan African countries were in or at risk of debt distress even before this year, while Zambia became the continent’s first pandemic-era default last Friday.

The United States, China and other G20 countries have offered the world’s poorest countries – many of which are in Africa – relief until at least mid-2021 and sketched out rules for rescheduling government debt to help fend off the risk of default in the wake of the coronavirus crisis.

But these plans to provide near-term breathing space might not go far enough.

“In 2021, a robust liquidity and structural response, recovery and reset toolbox must be developed in partnership between emerging markets, the private sector and the G20,” warned Vera Songwe, executive secretary at the UN Economic Commission for Africa.

Songwe is pushing for measures to unlock $500bn to help avoid leaving lasting scars due to prolonged funding gaps in the poorest economies.

The debt ratios of sub-Saharan African countries had already risen sharply before COVID-19, just more than a decade after the International Monetary Fund and World Bank launched the Highly Indebted Poor Countries (HIPC) initiative that slashed the debt burdens of some 30 low-income countries on the continent.

Fast forward to the year of the pandemic and sub-Saharan Africa is on track for a record 3 percent economic contraction this year, while debt-to-GDP ratios have doubled during the last decade to 57 percent, the IMF found.

“We are definitely already in a debt crisis, there is no question about that,” said Bryan Carter, head of global emerging markets debt at HSBC, referring to poor countries around the globe.

Some countries will need help with their debt stock, not just with payments.

Politicians such as Ethiopia’s prime minister and Ghana’s finance minister, as well as campaign groups have pushed for outright debt cancellations, on top of widespread calls for a longer suspension of servicing and repayment for the continent’s poorest countries.

Others, such as UNECA and some private investors, have also suggested the strength of development banks could be leveraged through loans and guarantees to bring down borrowing costs for countries under the most pressure.

“There are definitely some countries, like Zambia and Angola or Ghana, that are in pretty fragile spots right now,” said S&P Global Ratings sovereign group managing director Roberto Sifon-Arevalo, adding that the proposed plans did not tackle structural problems. “You need something much more profound and deeper and holistic than this particular approach.”

African countries make up half of the 73 countries eligible for the G20 Debt Service Suspension Initiative (DSSI).

Much has changed since the HIPC initiative when money was mainly owed to wealthy countries and multilateral institutions. Now, a plethora of creditors make help more complicated.

China plays a key role: its government, banks and companies lent some $143bn to Africa from 2000 to 2017, according to Johns Hopkins University.

“About 10 African countries have a debt problem with China,” said Eric Olander, co-founder of The China-Africa Project, adding that Chinese lending was concentrated in a small number of countries. “Djibouti, Ethiopia, Kenya, Angola, Zambia – they all have very serious debt issues.”

A third of the $30.5bn of public debt service payments due in 2021 by DSSI-eligible sub-Saharan African nations is owed to official Chinese creditors while a further 10 percent is linked to the China Development Bank, the Institute of International Finance calculated.

China signing up to the G20 framework was widely welcomed, although many have criticised a lack of transparency in its lending.

“If you look at China, the loans are mostly shrouded in secrecy,” said Nalucha Nganga Ziba, Zambia country director for anti-poverty charity ActionAid.

Writing before the G20 leaders’ meeting, IMF chief Kristalina Georgieva said the G20 framework, if “fully implemented”, could allow poorer nations to apply for permanent debt relief. She gave no details. Some G20 members, such as China and Turkey, remain sceptical on actual debt write-offs.

Meanwhile, shifting payments under the G20 deal from the near to the medium term could simply be pushing the problem down the road.

For example, Scope Ratings calculates that Angola taking part in the DSSI could push up its debt-servicing requirements from 2022 to 2024 by more than 1 percent of GDP per year.

A bump in Eurobond payments following a debt sale bonanza that saw the African hard-currency debt markets surpass the $100bn mark in 2019 could add to the pressure.

With dollar-bond yields hovering close to double digits, governments such as Angola, Ghana and Mozambique would struggle to tap markets at the moment.

Indeed, no sub-Saharan African government has sold Eurobonds since Gabon and Ghana did so in February, before COVID-19 hit.

Nevertheless, access to capital markets will be needed to refinance but also to help plug an external financing gap which the IMF estimates at as much as $410bn across the next three years.

“The potential battle is really going to be between countries wanting to grow, and investors saying we need to talk about fiscal consolidation straight away,” said Andrew Macfarlane, EM credit strategist at Bank of America. 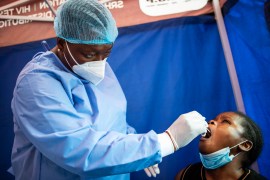 With 2,013,388 cases reported on Thursday, the continent represents less than 4 percent of the world’s total cases. 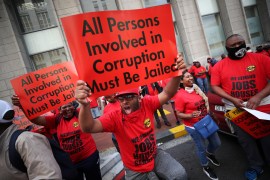 Country’s biggest unions urge members to stay away from work over the government’s handling of the pandemic. 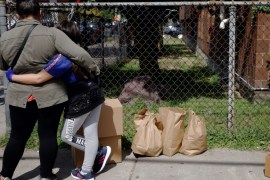 The expected budget deficit of $3.3 trillion would be more than triple the shortfall recorded in 2019.

Will the G20 step up with more debt relief for poorest nations?