By Alex Tanzi and Wei LuBloomberg

China’s surging economy is set to overtake 56 countries in the world’s per-capita income rankings during the quarter-century through 2025, the International Monetary Fund projects.

By that date, China will rank 70th in the world on the metric, putting it close to joining the richest one-third of nations, according to data analyzed by Bloomberg from last month’s IMF World Economic Outlook. 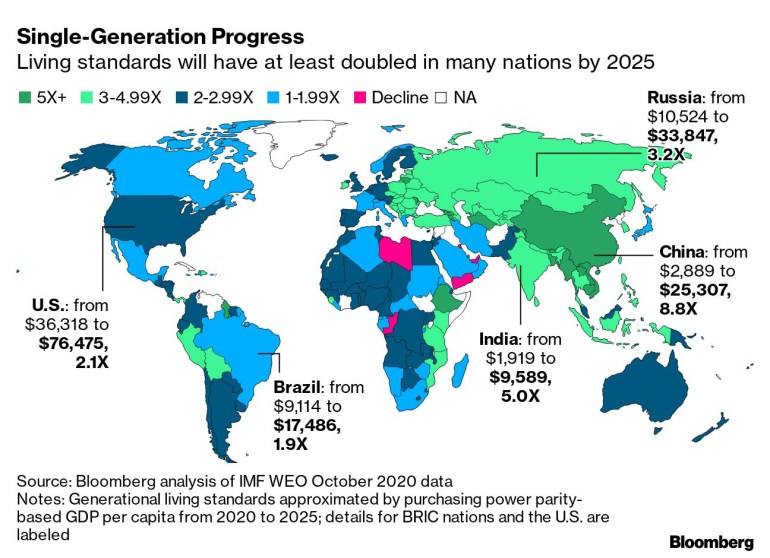 The Asian powerhouse is forecast to have per-capita GDP, adjusted for purchasing power, equal to $25,307 in 2025. That will take it past Argentina, one of the richest countries in the world a century ago and now mired in debt and currency crises.

Jim O’Neill, the former head of Global Economic Research at Goldman Sachs Inc. who famously created the BRICs acronym for Brazil, Russia, India and China in 2001, says that bloc “could become collectively bigger than the G-7 countries” in the 2030s, referring to the Group of Seven richest nations. “This is almost exclusively because of China, and to a smaller degree India,” he says.

There are plenty more remarkable findings in the data, which show large leaps especially among east European and Asian countries. 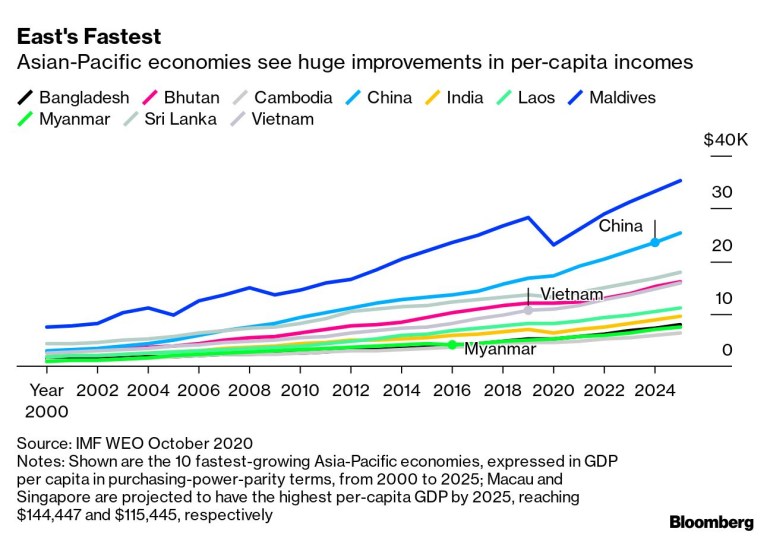 Turkmenistan is projected to be the only country climbing further up the rankings than China, advancing 58 spots. There are also big gains for Armenia, Georgia, Vietnam and Bangladesh.

Overall, developing Asian countries will see per-capita GDP rise sixfold in the period. By contrast, Latin America and the Caribbean, the Middle East and Central Asia aren’t expected to even double their incomes. 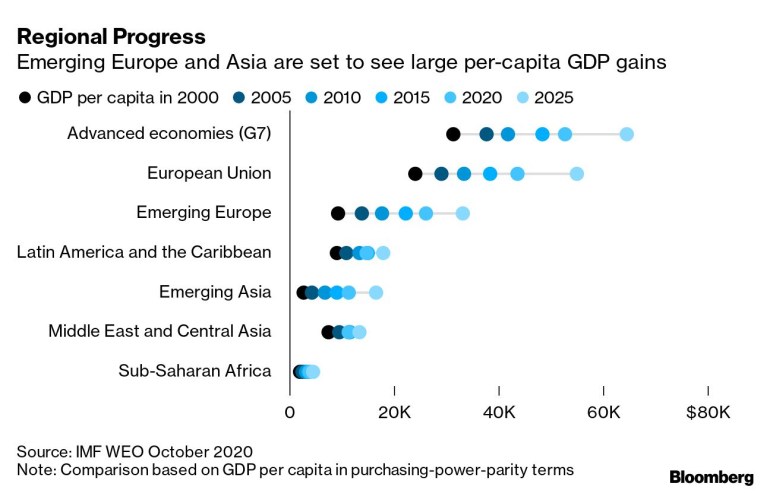 In general, Latin American and Caribbean economies have been laggards over the quarter-century. They’re also among the hardest-hit by Covid-19 this year, with per-capita GDP forecast to decline in all the region’s economies bar Guyana. In Venezuela, things have gotten so bad that the IMF didn’t even attempt forecasts — but by 2019, the country’s residents had already seen per-capita GDP slump 36% from 2000.

Haiti hasn’t recovered from the devastating earthquake of 10 years ago, despite billions of dollars in aid. It’s expected to rank 183rd out of 191 measured countries in 2025 –- down from 159th in 2000, and the lowest-ranked nation in the Western Hemisphere. 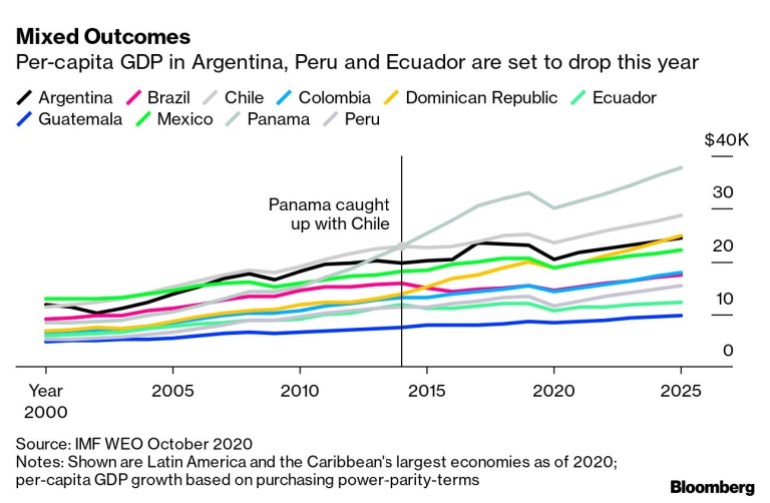 Persian Gulf nations, among the world’s richest at the turn of the century, have lost ground as the oil price receded. Bahrain, Kuwait, Oman and Saudi Arabia are all dropping out of the global top 20 as living standards stagnate or decline.

Others in the region have been devastated by war and political turmoil. Libya, Syria and Yemen have seen large declines. In Lebanon, the situation is so dire that the IMF expects a 25% contraction in GDP this year alone. The Middle East’s woes are reflected in the fact that all five of the countries projected by the IMF to have lower per-capita incomes in 2025 compared with earlier in the century are in the region. 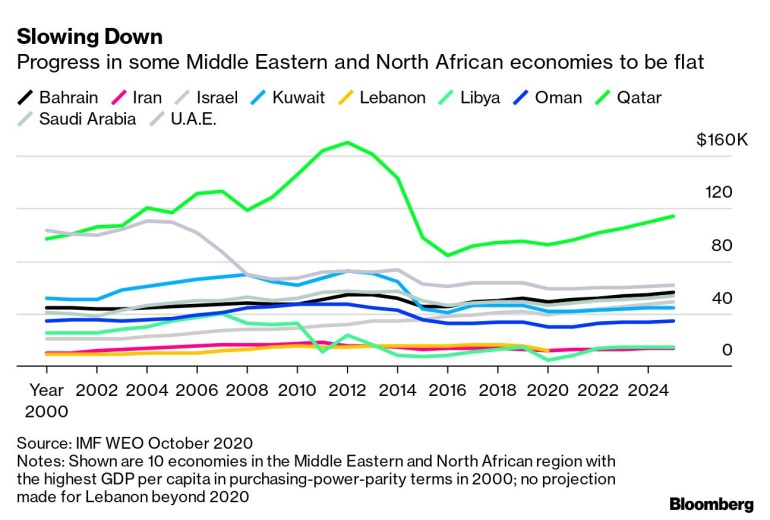 Sub-Saharan Africa remains a laggard in the world economy, although there are some bright spots. While only Seychelles and Gabon had per-capita GDP exceeding $10,000 in 2000, by 2025 six more economies are forecast to reach or pass that level. 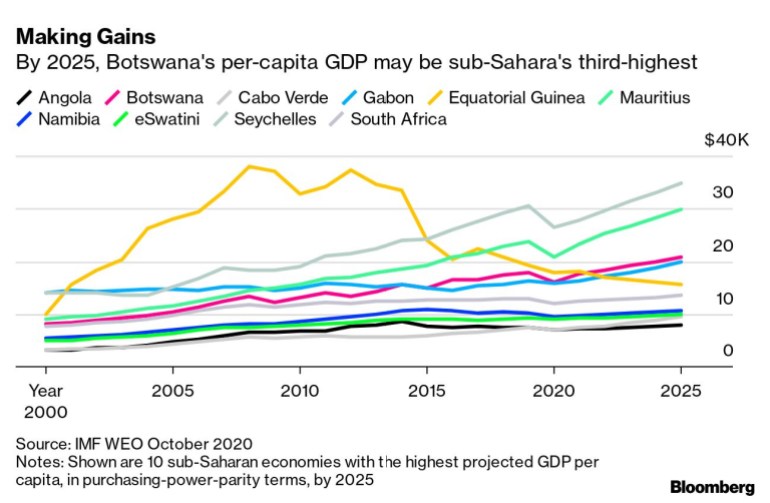 It’s in Asia where the increase in living standards is most dramatic.

The Asian city-states of Macau and Singapore are expected to move into the world’s top three for wealth, joining Luxembourg. Singapore’s per-capita GDP, which surpassed the U.S.’s in 2006, is projected by the IMF to reach $115,445 by 2025.

In the coronavirus year of 2020, the IMF expects only four of the world’s 50 biggest economies to achieve an increase in per-capita GDP, with Vietnam, Taiwan and Egypt joining China.

Most of the others are seen rebounding fairly quickly. The five nations with the most Covid-19 deaths — the U.S., Brazil, India, Mexico and the U.K. — are all forecast to post strong rebounds. Still, over the course of the pandemic they’ll have lost more ground to China.

“Companies in China have not only reported the greatest success so far in recouping output lost to Covid-19, but also anticipate making the fastest full recovery,” said Chris Williamson, an economist at IHS Markit. “U.S. companies come a close second.”