Bitcoin reached $17,000 for the first time since just after the burst of the cryptocurrency bubble almost three years ago.

“Demand for more diverse, stable products that take less risk is proof that the rally is driven largely by sophisticated players using them to hedge against the downside for underlying holdings, rather than the pump and dump, 100x rekt trades we saw three years ago,” said Denis Vinokourov, head of research at Bequant, a London-based digital asset firm. “Bitcoin may even go parabolic in a super charged rally past $20,000 as we approach the Thanksgiving holiday.” 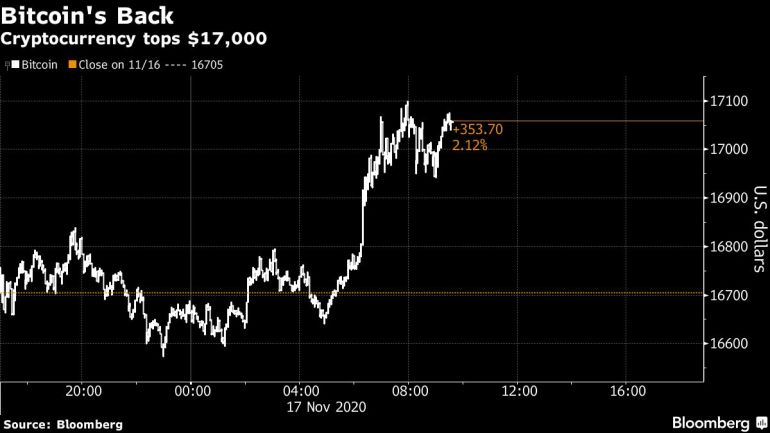 Its gains this year follow a wider embrace from Wall Street linchpins, including Fidelity Investments, which launched a Bitcoin fund over the summer. Some prominent money managers also became crypto converts, with macro investor Paul Tudor Jones buying the coin as a hedge against potential inflation. And PayPal Holding Inc. said in October it would allow customers to access cryptocurrencies, which spurred bets more people could start to use digital tokens.

Crypto fans have been watching Bitcoin tick higher all year, with many setting their sights on 2017’s record, while others are targeting even higher levels.

“Bitcoin has consistently been one of the world’s top-performing assets since its creation,” said Mati Greenspan, founder of Quantum Economics. “This latest surge comes as larger players enter the market sapping up what little supply remains for sale.”

While some die-hard crypto fans have stuck with it through its ups and downs, others have become newly enchanted by it amid the pandemic. Bitcoin this week got a star-power boost when Maisie Williams, the actress who portrayed Arya Stark in HBO’s “Game of Thrones,” asked her 2.7 million Twitter followers whether she should invest in the coin. The inquiry prompted answers from noted crypto investor Mike Novogratz as well as Tesla Inc.’s Elon Musk.

should i go long on bitcoin ?

Advocates argue the cryptocurrency can act as a safe haven during times of turbulence and can be a hedge against rampant central-bank money printing. Still others have been lured by its spectacular advance this year — the digital coin is up more than 135% in 2020 though it is still about 12% off its all-time high.

But the institutional embrace has been slow to come about amid elevated crypto volatility and some high-profile instances of hacking and theft. The Justice Department said this month it is suing for the forfeiture of more than $1 billion in Bitcoins it says are linked to the criminal marketplace Silk Road it shut down seven years ago. And earlier in the summer, the Twitter accounts of some of the most prominent U.S. political and business leaders were hacked in an apparent effort to promote a Bitcoin scam.

Bitcoin has seen an average daily move of 2.6% this year, according to data compiled by Bloomberg. That compares with swings of 0.9% for the price of gold, which is sometimes contrasted with digital assets.

Hugo Rogers, chief investment officer at Deltec Bank & Trust, bought Bitcoin when it traded around $9,300 in June and used any price weakness since then to add it to his portfolio. Bitcoin now makes up about 5% of his Global Absolute Return Fund, which is big on high-growth tech and biotech companies. He’s probably not going to stop at the 5% threshold, he said.

“A small position in Bitcoin can go a long way,” Rogers said by phone earlier this month. “There’s a lack of an alternative in real assets that can show a comparable return. If you’re going to diversify your portfolio anyway, this is a good place to go.”Some bitcoin enthusiasts think the world’s most popular cryptocurrency could make a run at $20,000 or higher

(Adds comment in the third paragraph. Updates prices.)
–With assistance from Kenneth Sexton.