More than 15,000 minks in the United States have died of the coronavirus since August, and authorities are keeping about a dozen farms under quarantine while they investigate the cases, state agriculture officials said.

Global health officials are eyeing the animals as a potential risk for people after Denmark last week embarked on a plan to eliminate all of its 17 million minks, saying a mutated coronavirus strain could move to humans and evade future COVID-19 vaccines.

The US states of Utah, Wisconsin and Michigan – where the coronavirus has killed minks – said they do not plan to cull animals and are monitoring the situation in Denmark.

“We believe that quarantining affected mink farms in addition to implementing stringent biosecurity measures will succeed in controlling SARS-CoV-2 at these locations,” the US Department of Agriculture told Reuters on Tuesday.

The USDA said it is working with the US Centers for Disease Control and Prevention, state officials and the mink industry to test and monitor infected farms.

Sick minks in Wisconsin and Utah were exposed to people with probable or confirmed COVID-19 cases, the USDA said. In Michigan, it is still unknown if the minks were infected by humans, according to the agency.

In Utah, the first US state to confirm mink infections in August, about 10,700 minks have died on nine farms, said Dean Taylor, state veterinarian.

“On all nine, everything is still suggesting a one-way travel from people to the minks,” he said. Coronavirus testing has been done on minks that die and randomly on the affected farms, Taylor said. Like people, some minks are asymptomatic or mildly affected, he said.

The CDC said it was supporting states’ investigations into sick minks, including testing of animals and people.

“These investigations will help us to learn more about the transmission dynamics between mink, other animals around the farms and people,” the CDC said. “Currently, there is no evidence that animals play a significant role in the spread of SARS-CoV-2 to people.”

Coronavirus is thought to have first jumped from animals to humans in China, possibly via bats or another animal at a food market in Wuhan, although many outstanding questions remain.

One farm is composting the dead minks to dispose of the carcasses without spreading the virus, Konkle said. Authorities are working with the second farm to determine how to dispose of the minks, and dead animals are being kept in a metal container in the meantime, she said.

“They are basically in a metal container, a roll-off type container, that is sealed off at this point,” Konkle said.

Michigan declined to disclose how many minks have died, citing privacy rules.

US authorities are urging farmers to wear protective gear like masks and gloves when handling minks to avoid infecting the animals.

State officials said they are working with the USDA to determine whether farmers can sell the pelts of infected minks. The pelts are used to make fur coats and other items.

“It’s our desire and certainly the owners’ desire to be able to use those pelts,” Konkle said.

The coronavirus has also infected cats, dogs, a lion and a tiger, according to the USDA. Experts say minks appear to be the most susceptible animal so far.

“Whatever we learn about mink is going to help understand the virus across species,” Taylor said. “It’s going to give us a better response to people to stop this pandemic.” 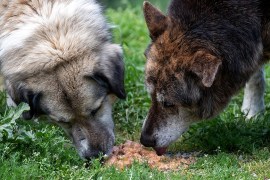 Dogs fill shelters and line streets amid travel restrictions and growing rate of abandonment due to financial woes. 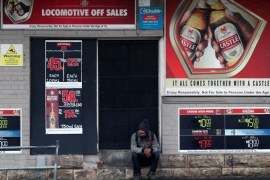 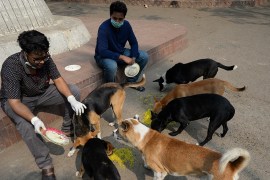 Bangladesh authorities say the nearly 30,000 stray dogs are a menace to the city as activists oppose their relocation. 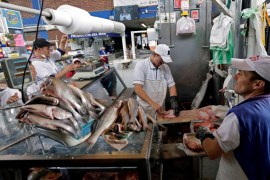 Catching sharks, cutting off their fins and tossing them in the ocean is not allowed in Colombia, but it’s happening.