Wall Street’s main stock indexes were all firmly in positive territory on Thursday after data showed the United States economy grew at an historic rate in the third quarter, thanks in large part to $3 trillion worth of pandemic aid passed by Congress.

But surging coronavirus cases in the US and Europe and partial lockdowns ordered in France and Germany are dragging on sentiment.

The Dow Jones Industrial Average was up more than 50 points or 0.19 percent around 11am Eastern Time.

The S&P 500 – a gauge for the health of US retirement and college savings reports – was up 0.74 percent, while the tech-heavy Nasdaq Composite Index was up 1.06 percent.

The US economy rebounded at an unprecedented annual rate of 33.1 percent in the third quarter, the Bureau of Economic Analysis said on Thursday.

The blockbuster reading follows a record-shattering 31.4 percent contraction in the second quarter – and a negative 5 percent hit in the first quarter – when the economy officially entered a recession in February.

President Donald Trump lauded the GDP growth, writing on Twitter: “Next year will be FANTASTIC!!!”

He also said that tax increases proposed by his Democratic rival Joe Biden threatened to  “kill it all”.

GDP number just announced. Biggest and Best in the History of our Country, and not even close. Next year will be FANTASTIC!!! However, Sleepy Joe Biden and his proposed record setting tax increase, would kill it all. So glad this great GDP number came out before November 3rd.

But despite the GDP (gross domestic product) boom, coronavirus cases are rising in the US and Europe.  The spike combined with the looming prospect of a contested outcome to the November 3 US presidential election is manifesting in the form of market volatility.

The CBOE Volatility Index (VIX), also known as Wall Street’s fear gauge, rose to its highest level since June on Wednesday after the White House coronavirus task force urged for aggressive measures to curb the spread of COVID-19 infections.

Despite Biden’s lead over Trump in national polls, Trump and Biden are neck and neck in some key battleground states which will likely determine the election’s outcome.

A contested election could bode poorly for Washington to overcome its partisan difference and pass a fresh round of stimulus that economists and Federal Reserve chief Jerome Powell have been urging to keep the economic recovery going.

The ongoing impasse has contributed to Wall Street’s main indexes being on a course to close out their worst week since March.

The economic picture is even grimmer in Europe where France and Germany on Wednesday introduced new restrictions to curb the spread of the surging virus.

Anti-lockdown demonstrations in Italy turned violent this week as another round will further pressure already gutted services industries. Bars and restaurants in many European countries where tourism reigns serve as an economic lifeline for millions of workers and their families.

“Activity in the services sector is slowing again as it is the sector most affected by restrictions on social activity and mobility,” Christine Lagarde, President of the European Central Bank acknowledged at a Thursday press conference in Frankfurt, Germany.

In the US, the rise of COVID-19 infections and the deadlock in stimulus talks threaten to heap even more pressure on millions of Americans who could find themselves in the cold winter months struggling to make ends meet and keep a roof over their heads and food on the table.

Many pandemic relief programmes are set to expire by year’s end, including the federal moratorium on evictions.

As Main Street struggles, Wall Street continues to ride its rollercoaster of uncertainty.

Tech titans have done very well in the first wave of the pandemic, gaining handsomely as the country shifted to working and learning remotely and shopping from home.

Shares of Apple, Amazon, Alphabet and Facebook were all trading higher before reporting earnings after the closing bell.

Shares of Pinterest were up a whopping 33.43 percent after an upbeat forecast for sales growth that highlighted a rebound in advertising spending.

And a passion for fashion in China saw shares of Coach owner Tapestry up 3.54 percent after it beat quarterly results estimates and forecast growth for the year as demand for luxury handbags and apparel rebounded in China from pandemic lows. 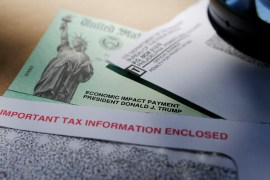 US GDP grows at a 33.1 percent annual rate in the third quarter, the fastest pace on record. 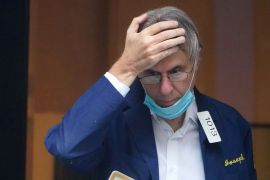 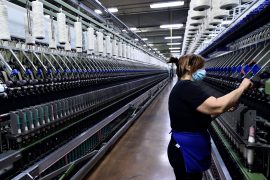 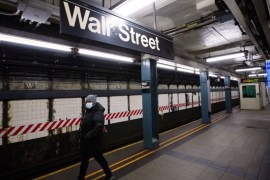