Amazon.com Inc on Thursday reported record profits for the second quarter in a row and forecast a jump in holiday sales, as consumers continued to shop more online during the novel coronavirus pandemic.

Shares initially rose 2 percent in after-hours trading and then turned lower by 1 percent as the company forecast $4bn in COVID-19-related costs for the current period and operating income below Wall Street’s expectations.

Since the start of the virus outbreak in the United States, consumers have turned increasingly to Amazon for the delivery of groceries, home goods and medical supplies.

Brick-and-mortar shops closed their doors; Amazon by contrast moved to recruit more than 400,000 new workers and earned $6.3bn in the just-ended third quarter, the most in its 26-year history.

That has kept the world’s largest online retailer at the centre of workplace and political tumult. Democratic politicians this month accused Amazon of holding “monopoly power” over merchants on its platform, which the company disputes. Meanwhile, more than 19,000 of Amazon’s US employees contracted COVID-19, and some staff protested for site closures.

Amazon has responded with an array of precautions and a virus testing programme for employees that have helped the company stay operational. For the third quarter, it garnered sales of $96.1bn, ahead of analysts’ average estimate of $92.7bn, according to IBES data from Refinitiv.

Jeff Bezos, Amazon’s chief executive and richest person in the world, said in a press release, “We’re seeing more customers than ever shopping early for their holiday gifts, which is just one of the signs that this is going to be an unprecedented holiday season.”

Amazon Web Services (AWS) has traditionally been a bright spot. The cloud computing division has seen sales rise with demand for gaming and remote work. The unit increased revenue 29 percent to $11.6bn, roughly in line with estimates.

The question for some analysts has been whether Amazon’s consumer division can keep up with still-growing purchases during a pandemic and peak holiday shopping season.

The company has long worked to avoid a repeat of the 2013 season when delays left some without presents on Christmas Day. Amazon now handles more deliveries in-house, and this year it moved its Prime Day marketing event – usually in July – to October, letting customers place holiday orders early.

Amazon said it expects net sales of $112bn to $121bn for the fourth quarter. That would mark the company’s first over $100bn and is ahead of analysts’ expectations of $112.3bn. 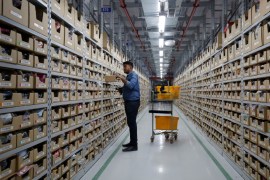 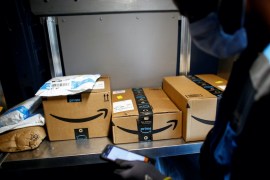 Amazon posts its biggest profit yet as pandemic sales surge

Amazon hired 175,000 people in recent months and saw demand for its services soar. 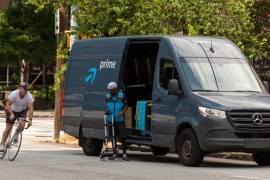 Amazon and eBay have come under scrutiny over their role in allowing counterfeit products to be sold around the world. 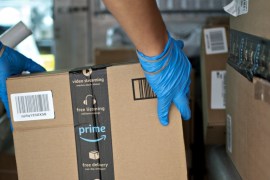 EU regulators are concerned Amazon may be shortchanging smaller merchants who sell on its marketplace, say sources.