Mumbai, India – Parneesh Mehta’s diamond jewellery business may be performing much better than many other companies around the world suffering from the crushing force of lockdowns to curb the spread of the coronavirus.

But the entrepreneur based in India’s commercial capital, Mumbai, says that is little consolation for the revenue he has lost because of tariff hikes on the gems and jewellery sector in his biggest export market – the United States.

In April 2019, the US withdrew India and Turkey from its Generalized System of Preferences (GSP), an import duty exemption on certain goods – including Mehta’s jewels – that require a lot of manpower to make, from developing countries.

“That really hurt us,” Mehta told Al Jazeera. “We had to adjust our prices for some of our clients. For others, we dropped the quality of the gems.”

With both exporters and importers feeling the pinch, Mehta says the added tax will prevent businesses from growing. “Everyone’s getting squeezed,” he said. “If the GSP was restored, there’s no doubt it would help the sector as a whole”.

Mehta’s experience is one example of how the India-US economic relationship has changed under the administration of US President Donald Trump. And why many Indian entrepreneurs like him have a keen interest in who occupies the White House after the November 3 US elections.

Trump has repeatedly taken aim at the US’s trade deficit with India, which stood at $28.8bn in 2019, nearly three times the $10.6bn figure in 2008. In March 2019, he called India “a very high-tariff nation” and has imposed tariffs on steel and aluminium imports to redress the gap. India later retaliated, raising duties on 28 US products.

Trump and Indian Prime Minister Modi have famously enjoyed a friendly rapport, but analysts say Trump’s punitive policies have made the economic environment more contentious. The two sides have repeatedly failed to sign even a “mini trade deal” that had initially been expected in September 2019.

“There’s been a lot of positive engagement, but in reality, we are far from getting anything ratified,” Biswajit Dhar, professor at the Centre for Economic Studies and Planning at Jawaharlal Nehru University, Delhi told Al Jazeera.

This could change if Trump’s Democratic rival, Joe Biden, becomes the next US president and brings with him a more measured policymaking machine.

“A Biden administration would not necessarily back down on big-ticket requests,” says Dhar, referring to the US’s push for greater access to India’s agriculture, medical device and e-commerce markets, and even for lower import tariffs on Harley Davidson motorbikes.

“But we’d be unlikely to see the same aggression towards trade partners. This could lead to a better outcome for Indian negotiators”.

Trump’s trade policies and negotiating stance may be based on populist impulses, but India is also taking an increasingly protectionist line.

India’s incoming data protection bill has become one of the thorniest issues in negations.

The bill threatens to prevent Indian data from leaving its shores, making life difficult for global technology giants such as Facebook, Amazon and Google that rely on the free-flow of data.

It also threatens to tax digital companies in a way that would also disproportionately affect US technology firms. The US has called this type of taxation “unfair” and “discriminatory” and has said it will “begin investigations” into how its trading partners are implementing such laws.

After its economy suffered a historic shock (gross domestic product shrank by a record 23.9 percent in the April-June quarter), exacerbating an urgent need to create more blue- and white-collar jobs, analysts say India cannot afford to close itself off from negotiating a more favourable US trading relationship.

“India needs to recognise that a trade relationship with the US is extremely beneficial for economic growth,” Anupam Manur, a research fellow at the Takshashila Institution told Al Jazeera. “Unfortunately though, we may see nationalistic jingo and political point-scoring continue to take the upper hand”.

However, recent investments by Facebook and Google in Jio Platforms, a subsidiary of India’s largest conglomerate, Reliance, could drive a change of mindset.

Reliance is India’s largest and most influential company. With two major US tech giants taking a seat each on its board, analysts say this could strengthen the hand of US companies lobbying the Indian government to liberalise a wide range of issues governing India’s digital platforms.

For this reason “I wouldn’t rule out a policy U-turn,” said JNU’s Dhar.

But, regardless of the outcome of the US election, analysts believe progress on a trade agreement will hinge on the US securing greater access to India’s huge, yet fragmented, agricultural markets.

India, however, is reluctant to endanger its mostly small-scale, independent producers by forcing them to compete with giant US agribusinesses. And with the global economic downturn set to drag on, as well as a strong farming lobby to placate at home, observers say a future Biden administration would likely take a hard line similar to Trump’s.

September’s historic changes to India’s farm laws, which will open up produce markets to private players, could also complicate matters. “Farmers already have apprehensions about these ordinances,” said Dhar. “Allowing American access on top of that means the situation could become very problematic”.

With US unemployment at a high 8.4 percent and the country experiencing the toughest economic conditions since the Great Depression, analysts say there may be little political room for either of the two contenders to deviate from the US’s existing – and increasingly nativist – trade policies.

“Let’s remember that Biden also has a ‘Made in America’ plan and has made an effort to appear tough on China,” explained Takshashila Institution’s Manur. “His talk of subsidising industry, which is against the World Trade Organisation rules, tells me he will also be protectionist”.

The White House’s recent announcement of plans to reduce the number of visas awarded to skilled workers by a third is one such area where Biden’s hands may be tied.

Last year, 74.5 percent of so-called H1-B visas were claimed by Indians, according to the US Citizenship and Immigration Services, plugging a shortage of highly skilled labour in the US’s technology industries. High-profile Indian CEOs such as Microsoft’s Satya Nadella and Sundar Pichai at Google’s parent Alphabet have also played an outsized role in contributing to Silicon Valley’s success.

Despite this, Indians look set to miss out on future opportunities.

“Like with the 2008 global financial crisis, the immigration issue has become mixed up in the feelings surrounding the downturn,” says Dhar. “[Biden] will eventually re-look at visa policies once the economy rebounds, but not before that”.

But a change of US leadership could mean a return to more nuanced, rules-based decision-making. Consequently, there are hopes in India that the Iran nuclear deal, originally signed under former President Barack Obama, a Democrat, and abandoned by Trump, will be back on the table.

This would help India, which lost an important export market, a valuable source of cheap oil and a potential stake in a key port by complying with US sanctions. “Iran has always been a strategic ally in the region,” says Dhar. “I hope this situation would improve if a new administration comes in”.

Closer ties in a changing world?

India is likely to remain a key ally for the US as geopolitical tensions rise in the Indo-Pacific region. In a speech during his visit to India earlier this year, Trump clubbed the two nations together as “powerful defenders of peace and liberty”, drawing a blunt contrast with China – the other great regional power. Biden too has said he would “stand with India”, promising to tackle terror threats in the region together.

As the US decouples itself from China’s economy, India is trying to take its place. Modi has pitched India as a “trusted partner” and welcomed foreign direct investment. In reality, US businesses are reluctant to leave China or disrupt their supply chains; and for the few that do, India is unlikely to be their preferred destination.

“At most, US companies are hedging, perhaps moving 30 percent of their operations to Vietnam or Laos – India is not attractive to companies yet,” said Takshashila Institution’s Manur. But the current reforms to labour and land laws, which would make it easier for foreign businesses to set up shop in India, could change that, he added.

India’s attempts to supplant undemocratic China and take advantage of the US’s boycotts and bans of Chinese technology firms may also invite increased scrutiny of its own human rights record.

US Democrats have indicated they will call out human rights abuses around the world. After India withdrew the semi-autonomous status of Kashmir – the region it administers in part while Pakistan administers the other – and imposed a military lockdown on its residents, Biden’s vice-presidential pick, Kamala Harris, reminded observers: “We are watching”, suggesting a potential sore spot in India-US relations.

Harris has repeatedly shown that despite her being part Indian, she may not be an easy ally for the Modi government. After India’s external affairs minister Subrahmanyam Jaishankar cancelled a meeting last year when the US House Affairs Committee refused to exclude Congresswoman Pramila Jayapal – a critic of India’s Kashmir policy – Harris actively defended Jayapal’s presence, ruffling diplomatic feathers in the process.

But not everyone believes that such conversations would harm the India-US economic relationship. A trade policy expert wishing to remain anonymous told Al Jazeera: “Modi has a thick skin about these things. Any criticism of human rights will wash off his back”.

Tish Sanghera is a journalist based in Mumbai, where she writes about economic, political and social issues. Twitter: @TishSanghera 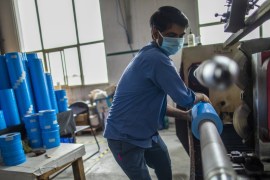 Firms are being forced to shed jobs, adding to the already near-record high unemployment rate. 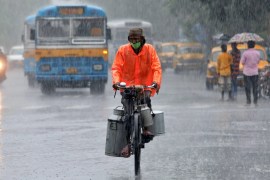 India experiences an economic storm as the coronavirus rages

Analysts say India’s economy likely shrank by about 20 percent in the April-June quarter as country went into lockdown. 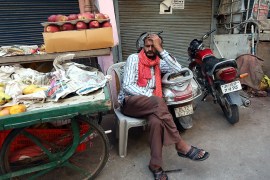 As cases of COVID-19 rise in India and a national lockdown is extended, many businesses wonder how they will manage. 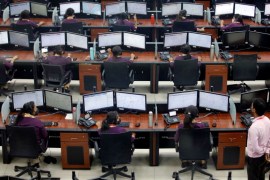 People under 30 have been badly hit by job losses due to COVID-19, eroding one of India’s key economic advantages.