When Puerto Ricans go to the polls Nov. 3 to elect their governor they’ll also be asked, once again, if they want to be the 51st star on the American flag.

The statehood referendum in the bankrupt territory of 3.2 million people is non-binding. And although this is the sixth time the issue has been on the ballot, boosters think this round is different – if the political stars align.

If voters say “yes” to statehood, as they did in 2012 and 2017, the pro-statehood gubernatorial candidate Pedro Pierluisi wins, and the Democrats take control of the U.S. Congress, the Caribbean island might have a shot at becoming a state, organizers say.

If so, the Great State of Puerto Rico would be eligible for two seats in the U.S. Senate and five in the House of Representatives. That has made the issue newly intriguing amid partisan infighting in Washington, said William Villafane, a local senator and the referendum coordinator for the pro-statehood New Progressive Party.

“Nationally, there is this impression that Puerto Rico is Democrat, and that those two additional seats would allow the Democrats to control the Senate,” he said. “This has created a window of opportunity for us in the Democratic Party.”

Many prominent statehooders identify as Republicans, but they’re willing to promote the idea that the island is solidly blue if it will help nudge the statehood issue forward.

“In reality, I think Puerto Rico would be a swing state or a battle ground state,” Villafane said.

With a poverty rate of 43%, Puerto Rico would be the poorest U.S. state — far behind Mississippi at 20%. It would also be the most financially distressed. Puerto Rico and its agencies racked up $74 billion of debt before collapsing into bankruptcy in 2017. It’s still in court working out how to cut its debts and fix a broke pension system that owes current and future retirees $50 billion.

Proponents of statehood say it’s the only way to give Puerto Ricans a voice, vote and equal footing in federal assistance programs. Critics say it would mean increased federal taxes and obliteration of the island’s unique culture – without necessarily solving any of its pressing problems.

Polls show Pierluisi is in a tight race with Carlos Delgado Altieri, of the Popular Democratic Party, or PPD, which opposes statehood. That means there’s a real chance that voters may choose statehood even as they elect an anti-statehood candidate, as they did during the 2012 referendum and election.

And there are also no guarantees that the U.S. Congress — regardless of who’s in control — will embrace the Caribbean island as the first U.S. state since 1959, when Hawaii and Alaska were incorporated.

Despite the challenges of threading the political needle, Villafane is optimistic.

“This is not just another referendum, this is another step on our way to making Puerto Rico a state,” he said. This is the best chance we’ve ever had.” 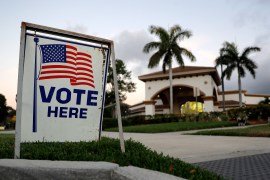 Trump and Biden battle for Florida, the swing state that has voted for every presidential winner since 1996. 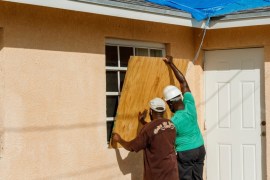 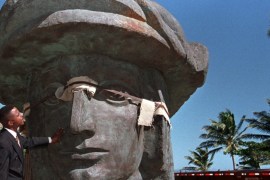 Puerto Rico looks to colonial legacy as statues tumble in US

Amid the racial justice movement, protesters in the US territory have called on leaders to rethink its monuments. 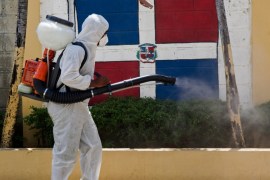 Dominican Republic vote to go ahead despite coronavirus threat

The Caribbean nation of 10 million lifted a coronavirus state of emergency as candidates made their final drive.