Nancy Shively has voted for every Republican presidential nominee since 1976. Her first vote in a presidential election went to Gerald Ford. In the late 1980s and early 2000s, she cast her votes for both Presidents Bush – George H W and George W. And in 2016, she voted for Donald Trump, even though she said she was “never a big fan”.

“I think what got me voting for him in 2016 was the fact that I have been a Republican my entire life,” Shively, 63, told Al Jazeera. “So there was the weight of all that.”

But this year, Shively said she cannot hold her nose and vote for Trump again. When she casts her ballot, it will be for the first Democratic presidential nominee to ever earn her support: Joe Biden.

Shively, an Oklahoma native, is among the growing number of white women who voted for Trump in 2016 but refuse to do so this year. The reasons for their shift vary from Trump’s values to his rhetoric to his actions in and outside the White House. But their sentiment is largely the same: Trump as president has made the United States worse off, and they fear what four more years could bring.

Shively said the final straw came while watching the president at the White House coronavirus briefings earlier this year.

“Really seeing in living colour … his personality on display, it was just so clear to me how relentlessly narcissistic he is and how he was trying to pawn off responsibility on the governors instead of doing it himself,” she said.

For Shively, the threat of the coronavirus pandemic is particularly dire: her autoimmune diseases put her at higher risk of complications if she were to contract COVID-19.

“When I voted for Trump, I didn’t know I was [potentially] signing my own death warrant,” she said. That’s why during one of those briefings, she hopped on her iPad and changed the party affiliation on her voter registration to “Independent”.

Kris Searcy’s feelings of regret came several years earlier. Like Shively, Searcy said she was not a big fan of Trump in 2016. In fact, she said she felt “disgusted” voting for him, but she also had serious misgivings about then-Democratic challenger Hillary Clinton.

“I thought Trump would just sit back,” the Kentucky native told Al Jazeera. “I didn’t think he would be involved in anything. I thought he would get a lot of really smart, intellectual conservatives to come in.”

Day one of his presidency, however, revealed just how wrong she had been, Searcy said. “When I heard his inauguration speech, I just felt sick to my stomach,” she recalled.

“I knew that none of those things that I thought were gonna happen,” she added. “I just had this sinking feeling at that moment that we would maybe never again be united.”

Although the majority of women voters cast their ballots for Clinton in 2016, the former Democratic candidate lost – albeit by a small margin – to Trump among white women. But recent polling suggests that support for Trump may be shrinking, and because women have historically been more reliable voters than men, even a small shift could make a difference in who wins or loses in November.

Women have outvoted men in every presidential election since 1980, said Kelly Dittmar, director of research at the Center for American Women and Politics. That is why in the broad sense, “it matters to get the support of women,” she explained.

When I heard his inauguration speech, I just felt sick to my stomach.

Women voters overall favour Biden by 11 points, according to an in-depth poll conducted by All In Together, a non-partisan civic education organisation, Lake Research Partners and Emerson College Polling between August 30 and September 1. Other polls put the margin even wider.

Such support is especially visible at the issue level. Women voters trust Biden to handle race relations, the coronavirus pandemic, the reopening of schools, and law and order by double-digit margins, the All In Together poll found. The former vice president is also trusted more than Trump on economic recovery, albeit by a smaller margin (51 percent to 43 percent), according to the same poll.

“What has really emerged, and has shifted over the course of the year, is just what huge pluralities of women across virtually every demographic oppose the president and support Joe Biden,” said Lauren Leader, the co-founder and CEO of All In Together.

“And then when you go to the women who have been sort of most contested in a sense, which are the suburban women, [Biden] has really solidified support with suburban women as well,” she added.

Michele, who lives in the suburbs of Atlanta, Georgia, is among that demographic. The 42-year-old, who asked to be identified by only her middle name, said that while she considers herself an Independent, she has always voted for Republican presidential candidates.

When it came to the 2016 election, she did not like either candidate, but felt that Trump, at least, showed his cards.

Michele said that while she did not watch the news often during Trump’s first few years in office, she had a “growing unsettling feeling” as she heard about some of his policies, including the travel ban on people from several Muslim-majority countries and the administration’s policy of separating migrant children from their parents at the US-Mexico border.

Really seeing in living colour … his personality on display, it was just so clear to me how relentlessly narcissistic he is and how he was trying to pawn off responsibility on the governors instead of doing it himself.

Nancy Shively, voted for Trump in 2016

The tipping point came when she realised her father believed the pandemic was a “hoax” created by Democrats to remove Trump. As someone who works at a hospital, Michele knew the coronavirus was not “a red or blue issue,” and that no matter who the Democrats nominated, that candidate would get her vote.

Democrats and their supporters have focused much of their efforts on reaching suburban women like Michele.

In the battleground state of North Carolina, for example, Austin Cook, the state’s Democratic Party communications director, said suburban women have been a top priority for the party’s outreach and engagement.

“All public and internal polling shows these voters are turned off by Trump’s rhetoric and platform, which is why engaging them has been a top priority for us since we began building our Democratic coordinated campaign in 2019,” Cook told Al Jazeera.

I like the stuff that he does, not necessarily what he says or how he acts.

This includes focusing on the coronavirus pandemic and healthcare, some of the top issues for women. Biden also chose Kamala Harris, the first Black and Asian American woman on a presidential ticket, as his running mate.

On the other hand, it is clear that Trump’s “law and order” messaging is also targeting his suburban white women base. He has falsely blamed low-income minority groups for “ruining this American dream” for everyone in suburbia.

But amid reports in a shift in white suburban woman’s loyalties, Trump has taken what appears to be a more desperate tone.

“Can I ask you to do me a favour, suburban women? Will you please like me? Please. Please. I saved your damn neighbourhood, OK?” Trump said at a campaign rally in Pennsylvania last week.

While commentators argue such racist – and outdated –  rhetoric is not playing well with suburban women, data from All In Together show that Trump maintains support among non-educated white women, a key demographic.

Non-college educated white women “who are with Trump have been his solid stalwart base,” said All In Together’s Leader.

That is true across a spectrum of issues as well. For example, even though women are being disproportionately affected by the pandemic when it comes to the economy, childcare responsibilities and other issues, many – with college degrees or not – who support Trump do not blame him or see him as being able to have made a difference, Leader said.

Sherry Lynn Womack, a retired Army lieutenant and the director of Women for Trump North Carolina, blames governors – particularly her Democratic governor – for the current economic state of the country. It is a sentiment she said is felt by many of those who make up the Women for Trump-NC group, which is not directly affiliated with the Trump campaign.

“It’s hard for me to blame a president for something that comes out from a governor,” Womack, 57, told Al Jazeera, referring to policies that closed local businesses and kept children from physically going back into the classroom to combat the pandemic.

Womack said that she does not always like what comes out of the president’s mouth, but she does like the promises he has kept, including moving the US Embassy from Tel Aviv to Jerusalem, and his appointment of conservative judges.

“I like the stuff that he does, not necessarily what he says or how he acts,” she explained.

What has really emerged, and has shifted over the course of the year, is just what huge pluralities of women across virtually every demographic oppose the president and support Joe Biden.

Lauren Leader, All In Together CEO

According to Leader, women who make up Trump’s base, particularly non-college educated white women, may again play an oversized role in this election as they did in 2016.

“The whole dynamic in American politics right now is this question of the tyranny of the minority: that you could have this small … not representative group of women, as they did in 2016, flip the election for Trump, because they’re his base and they are heavily represented in critical Electoral College states,” Leader said, referring to battleground states.

That is why turnout is everything, she added, and why both Republicans and Democrats are not taking suburban women for granted.

For women like Shively in Oklahoma and Searcy in Kentucky – both from traditionally Republican states – their hope is that they will play some role in a larger fight to get Trump out of office this year.

“The important thing is we are all working toward the same goal now,” Searcy said. “I don’t owe anyone an apology for how I voted [in 2016] – that’s what’s great about this country – but I do owe it to everyone to not make the same mistake in 2020.”

Editor’s note: The All In Together survey examined 1,273 registered women voters nationwide with a +/-2.75% margin of error. The survey also oversampled 668 registered women voters in the battleground states of Wisconsin, Minnesota, Arizona, North Carolina, Virginia, Colorado, New Hampshire, Florida, Michigan and Pennsylvania with a +/-3.8% margin of error. The oversample was weighted down to reflect their actual proportion of women voters. 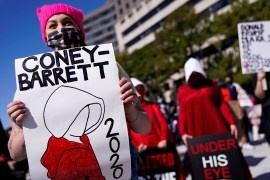 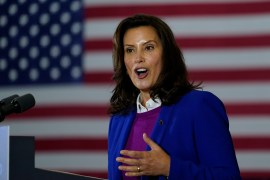 Trump’s barbs at Michigan Governor Gretchen Whitmer, the target of a kidnapping plot, prompted chants of ‘lock her up’. 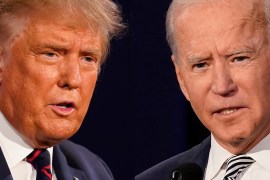 Biden or Trump? Famed US historian predicts winner of US election

US historian, who has accurately predicted every election since 1984, believes Donald Trump will lose the 2020 race. 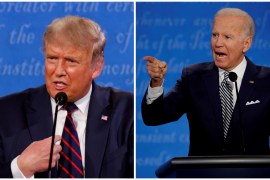 Donald Trump’s behaviour will be in focus as he seeks to shake up his race against Joe Biden.