Oman waded back into the international debt market after more than a year with a $2 billion bond sale after raising the possibility of assistance from its Gulf neighbors.

The sultanate dropped plans to place a bond with a three-year maturity on Wednesday and is selling $1.25 billion of seven-year notes and $750 million of 12-year securities, according to a person familiar with the deal. It’s in preliminary talks to win support from some states in the region, according to its bond prospectus.

Derivatives traders have pared back wagers for a devaluation of the Omani rial on anticipation that the wealthier Gulf states will come to the country’s rescue – as they did for Bahrain two years ago – if its peg to the dollar comes under threat.

Oman has lagged most peers in implementing fiscal reforms despite dwindling reserves and a budget deficit S&P Global Ratings estimates could reach 18% of gross domestic product this year. The government was facing increasing pressure to tap global debt markets as a widening fiscal shortfall leaves the sovereign underfunded by about 1.3 billion rials ($3.4 billion) to 1.4 billion rials, according to Morgan Stanley. 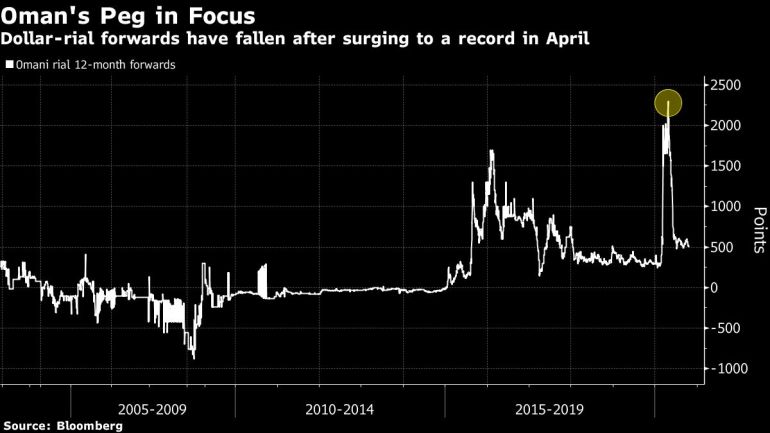 “Given the weakness in external balances, the buyers will likely be those who ascribe a greater probability of support if it comes down to it, in the Bahrain-type of model,” said Todd Schubert, head of fixed-income research at Bank of Singapore.

The sultanate’s long-standing role as a mediator on regional and international issues, including with Iran, and its geographical position on one of the world’s busiest shipping lanes, make its stability important to Gulf states and international allies like the U.S.

At the same time, Oman’s resistance to taking sides in regional disputes and adopting Saudi Arabia’s foreign policies could complicate efforts to secure help from its neighbors.

Oman forged ahead with its borrowing plan just days after S&P cut its debt rating to B+, four rungs below investment grade. While the government said it wants to introduce a delayed 5% value-added tax in April, S&P said fiscal austerity measures will probably only be rolled out gradually.

Under a medium-term fiscal program created to strengthen public finances, Oman also plans to introduce income tax on high earners, according to the bond prospectus.

“The new deal comes at a tricky time for the country,” said Abdul Kadir Hussain, the head of fixed-income asset management at Arqaam Capital in Dubai. “The market knows they need the funding. It’s relatively close to year-end, so investors generally tend to get a bit defensive around this time of the year anyway.”

Oman’s government expects to price the shorter notes at a yield of 6.75%, down from initial guidance in the 7% area. It’s aiming to price the 12-year securities at 7.375%, down from about 7.625%, the person familiar with the matter said, asking not to be identified because they’re not authorized to speak about it.

Oman’s bonds are the worst performers in the region this year, and, until now, the country had stayed out of the market after raising $3 billion last year.

“This will significantly reduce the pressure to raise domestic debt or draw down their reserves,” said Monica Malik, chief economist at Abu Dhabi Commercial Bank. “The funding requirement will remain high going forward, so continued access to the international debt market is important.”

-With assistance from Lyubov Pronina, Archana Narayanan and Finbarr Flynn.