China’s Ant Group Co Ltd has won approval from the Hong Kong Stock Exchange for the offshore leg of its initial public offering (IPO), two sources told Reuters news agency, clearing the last key regulatory hurdle to launch a dual-listing expected to be worth about $35bn.

Backed by Chinese e-commerce giant Alibaba Group Holding Ltd, Ant passed the hearing with the exchange’s Listing Committee on Monday, the sources said, speaking on condition of anonymity because the information is not public.

The fintech company plans to list simultaneously in Hong Kong and on Shanghai’s STAR Market in the coming weeks, sources said, in what could be the world’s largest IPO, surpassing the record set by oil giant Saudi Aramco’s $29.4bn float last December.

Ant and the Hong Kong Stock Exchange declined to comment.

The move comes one month after Ant won approval from the Shanghai Stock Exchange for the domestic leg of the dual listing.

The company also looks to receive the final nod from China’s top securities regulator for its STAR IPO this week, said one of the people.

It had received final approval from the China Securities Regulatory Commission (CSRC) for the Hong Kong leg of its dual IPO, the regulator said on its website on Monday.

The Hong Kong meeting was a regularly scheduled committee hearing, during which the IPOs of several companies were discussed and approved.

The 28-strong committee contains a mix of bankers, lawyers, accountants and investors, and its approval is essential for any IPO candidate.

Ant plans to start a brief premarketing period this week before opening order books next week, one of the sources said. Its shares are likely to start trading “a few days” after the November 3 United States presidential election, said the person.

After receiving initial feedback from potential investors, Ant looks to increase its offering size to $35bn from up to $30bn, targeting a valuation of about $250bn or more, Reuters news agency has reported.

Last week, sources said the CSRC was probing a potential conflict of interest in the planned listing, delaying approval.

The regulator was looking into the role of Alipay, Ant’s flagship payment platform, as retail investors’ only third-party channel to buy into five Chinese funds investing in the IPO.

Ant aims to sell 10 to 15 percent of its enlarged share capital in the IPO, split evenly between Hong Kong and Shanghai. It does not plan to offer a cornerstone tranche in Hong Kong in anticipation of strong demand from institutional investors.

The national pension fund didn’t immediately respond to a request outside of business hours in China. 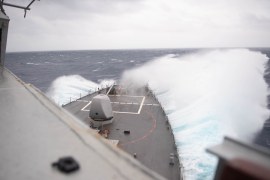 China says US undermines peace after ship sails through strait

The destroyer USS Barry sailed through the Taiwan Strait on Wednesday in what the US Navy said was a ‘routine transit’. 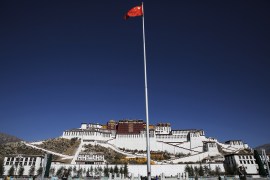 China slams US appointment of special coordinator for Tibet 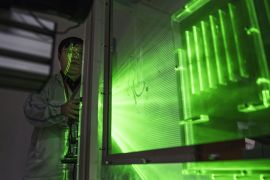 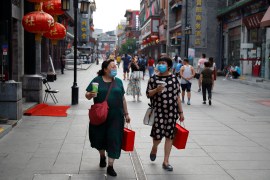 Economic growth is expected to have accelerated to 5.2 percent in the July-September period, economists say.