When I looked at my daughter’s remote kindergarten schedule a few days before the first day of school, I nearly cried.

The template asked students to be logged in to Google Classroom for most of the school day, from 8:30am to 2:30pm. As a single parent working full-time as a freelancer, there was no way I could arrange my day around that schedule.

I imagined having to make excruciating decisions: Do I miss a deadline or does my daughter miss her reading group? I couldn’t do it.

I sent an email to my child’s teacher, explaining how overwhelming the schedule seemed. She responded: “I’m sorry. It wasn’t my intention for parents to feel overwhelmed.”

The apology felt as hollow as if an actual kindergartener had been asked to apologise for stepping on a classmate’s foot.

The other Jersey City, New Jersey parents in my WhatsApp group were discussing how they were going to make the schedule work: Hiring nannies. Paying for their child to attend private pods, with professionals to assist them with online learning.

In two-parent households, some were mulling taking a step down from work.

In the end, I pulled my daughter out of public school and enrolled her in a $20,000-per-year, outdoor-based private kindergarten, a huge sum of money I definitely was not planning to spend this year. I am able to swing the cost through savings and sacrifice – not to mention two years of participating in a quality, fee-free, public preschool programme the likes of which is unavailable to much of America.

But I am all too aware that I am just one of millions of parents who have had to make similar financial sacrifices to find a childcare solution this fall. And even though this year’s circumstances were extraordinary, it felt like just one more thread was yanked in an already fragile web.

Economic data is showing us just how fragile that web is – and always has been. Some 865,000 adult women dropped out of the labour force last month alone, according to the Bureau of Labor Statistics.

More will follow: McKinsey and LeanIn.org’s 2020 Women in the Workforce report found that one in four women are considering downsizing their career or leaving the workforce due to the challenges of caring for children, managing remote learning and working full-time during the COVID-19 crisis.

Mothers with partners reported spending about 20 extra hours per week – half a full-time job – on household chores and childcare.

For so many families, something just has to give. LeanIn co-founders Sheryl Sandberg and Rachel Thomas put it bluntly in a recent Wall Street Journal op-ed: “If we had a panic button, we’d be hitting it.”

While the COVID-19 crisis destroyed the fragile web so many working families have knit with school, daycare, after-school programmes and nannies, childcare in normal times was already expensive and unreliable.

A study published in January by the Economic Policy Institute, a progressive think-tank, found that parents collectively spend over $42bn on early childcare and education. Individually, households shell out between 10 percent and 28.6 percent of their income on childcare – an expense frequently larger than monthly housing expenses.

ReadyNation, a nonpartisan organisation of more than 2,000 business leaders, found that the United States’s lack of quality, affordable childcare cost the nation $57bn annually in lost earnings, productivity and revenue.

Fixing America’s childcare system was an important campaign issue prior to the pandemic. In 2016, US President Donald Trump campaigned on doubling the childcare tax credit from $1,000 to $2,000. His 2020 budget also added $1bn in funding for federal early learning programmes, implemented through the Child Care and Development Block Grant (CCDBG) programme and focused on low-income families.

In 2018, Trump also signed into law a $2.4bn funding increase for the Child Care and Development Fund (CCDF), providing a total of $8.1bn for states to fund childcare for low-income families.

During Trump’s tenure, the Federal Employee Paid Leave Act was passed, providing 12 weeks of paid parental leave to government employees, leading some to hope it was a harbinger for universal paid family leave.

Despite that progress, the US remains the only developed country in the world with no federal mandatory paid maternity leave. And critics say Trump’s spending on the Child Care and Development Fund (CCDF) was not substantial enough to address fundamental issues with the childcare system, including its underfunded workforce – largely made up of women of colour – a dearth of providers and overall affordability for families.

“The Trump administration had a fair amount of talk during the campaign and during the administration about family policy, but when the rubber hit the road, we saw a modest increase in the child tax credit,” Brad Wilcox, Director of the National Marriage Project at the University of Virginia, told Al Jazeera.

While paid parental leave for federal employees is “a step in the right direction,” Wilcox said,  “if there had been a bigger push from the administration, we could have achieved some sort of compromise on paid parental leave” for everyone else, too.

Trump’s current plan is mainly focused on letting parents choose between private, public and charter schools, and does not explicitly mention childcare or early education.

Democratic presidential candidate Joe Biden has rolled out an extensive child and elder care plan he estimates will cost $775bn over 10 years, paid for, in part, by rolling back tax breaks for real estate investors with annual incomes over $400,000 and making the wealthy comply more with existing tax laws.

Biden’s plan features sliding-scale subsidies and expanded tax credits to provide access for early childcare, as well as a universal preschool programme. Also critical to his plan are increased wages, benefits and legal protections for childcare workers, from pre-kindergarten through secondary school.

“For example, Arizona’s teacher shortage has been worsened by the fact that over 300 educators have made the choice to resign or retire due to COVID-related concerns. These facts all point to the need to develop state and federal policies to better recruit and retain teachers, particularly teachers of colour, who are currently underrepresented in K-12 schooling,” Loewenberg explained.

But Wilcox thinks the Biden platform is focused too much on universal childcare, to the detriment of family choice.

“I’d like to see a permanent monthly allowance going forward,” Wilcox said. “From my vantage point, a child allowance is the way to go because it allows families to make decisions for themselves. I would not use universal care as the standard that policy is organised around.”

For parents across the aisle, one thing is clear: the status quo of a broken childcare system is simply no longer acceptable. The COVID-19 crisis has laid bare just how dependent our economy is on childcare to run: without it, parents simply cannot work.

So regardless of who becomes the next US president, future policymakers would be smart to listen to their parent constituents, many of whom are frustrated, stretched to breaking point, and turning to Washington for a sustainable path forward. I know I am one of them. 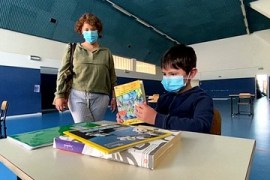 Parents in Europe worry whether to send kids to school 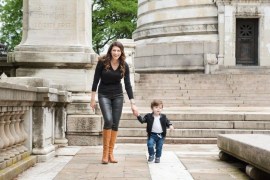 Women’s wages take a hit for every child they have, and some are penalised even before becoming pregnant. 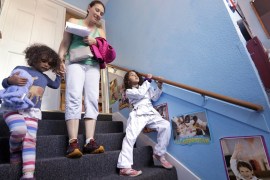