Athens, Greece – The governments of Greece, Israel and Cyprus have signed an agreement to build a pipeline that could supply Europe with 4 percent of its annual gas needs by the middle of the decade.

“Today we did not simply sign a beneficial agreement. We sealed our resolve for a strategic connection between our countries in a region that now more than ever needs growth and security,” Greek Prime Minister Kyriakos Mitsotakis said on Thursday.

The agreement is a statement of political will, but it is now up to the construction consortium, led by the Public Gas Corporation of Greece (DEPA) and Italy’s Edison, to find the roughly six billion euros ($6.7bn) the pipeline is estimated to cost.

East Med would stretch almost 1,900 kilometres (1,181 miles) from Israeli and Cypriot gas fields in the eastern Mediterranean to Italy via Greece.

It would initially carry 10 billion cubic metres (bcm) of gas a year but could expand to twice that with the latest compression technology.

“This is a historic day for Israel,” said Israeli Prime Minister Benjamin Netanyahu. “Just days ago we started pumping [the] Leviathan [gas field].

“We have huge quantities there. This means a lot of money will come into the economy. That is good for peace because we have agreements with our Arab neighbours.”

DEPA took the first step towards making East Med viable on Thursday by pledging to buy 2bcm of Israeli gas a year, which it feels it can sell on to European gas distributors.

DEPA is to buy the gas from Energean, another Greek company, which is developing nine Israeli gas fields.

“More pipelines, more entries of gas into the country, means more competition, and more competition means lower prices for the consumer,” Energean CEO Mathios Rigas told Al Jazeera. “This is exactly what happened with our project in Israel … So both security of supply and competition will be coming through this pipeline.”

Competition to provide gas to Europe is fierce, as the continent seeks to rid itself of coal and high greenhouse gas emissions.

“The EU is performing the biggest energy transition in the world today, so this is where the biggest market is going to be,” said Ioannis Desypris, a director at Mytilineos Group, Greece’s leading independent electricity producer and gas trader.

Some of that demand is being satisfied by shipments of Liquefied Natural Gas (LNG).

This year, the Trans-Adriatic Pipeline (TAP) will begin delivering gas from the Caspian Sea, across Turkey and Greece to Italy and the broader European market.

But that still leaves a gap in the market. The Oxford Institute for Energy Studies estimates that European demand will outstrip LNG supply in two to three years.

“The previous European Commission had set a goal to find New Gas. Lots of LNG terminals opened up. Huge amounts of money were spent on TAP,” says Desypris.

“The emphasis now is on New Gas. Where is the new gas? In the east Mediterranean. There is no other. The North Sea is depleted. Holland is running out.”

Since 1999, Israel has discovered about a trillion cubic metres of gas. Cyprus has discovered at least three important gas fields since 2011. Both have more than enough gas for their domestic markets and are looking at export options. Greece, Cyprus and Israel have been discussing East Med since 2013.

Gas competition to enter the European market is fierce because, in the process of decarbonisation, even gas only has a limited window of opportunity.

“Probably in the 2020s there will be room for everybody’s gas, at least in reasonable proportions. But once we get certainly past 2030 … we wouldn’t be so certain,” said professor Jonathan Stern who heads the Oxford Institute for Energy Studies.

“What the models mostly show is, if we’re going to meet the Paris targets (COP21), never mind any consideration of net-zero [emissions], then gas has to basically remain relatively flat in terms of demand … and then post 2030 it has to decline relatively rapidly.”

The European Union has already declared its interest in East Med by pledging 36.5 million euros for research and technical planning.

Greece is expected to face opposition from Turkey, which recently claimed a section of the Mediterranean through which the pipeline must pass as its own maritime jurisdiction. Greece also claimed the area in a 2011 law. The EU has declared Turkey’s claims as legally invalid.

“We do not have anything to gain from tensions but you know there are certain limits,” Greek energy minister Kostis Hatzidakis told Al Jazeera.

“Everybody has to understand that this year is 2020, we are in Europe, we want all the countries of the broader region to cooperate, but of course this has a prerequisite which is international law and a spirit of goodwill. Mitsotakis hastened to quell Turkish reactions. East Med doesn’t threaten anyone. Trilateral fora like ours are not directed against anyone.

“Regional cooperation is open to all – under one condition – that they respect international law.”

East Med’s backers and Turkey will likely have to find a modus operandi.

Article 79 of the International Law of the Sea says coastal states “may not impede the laying or maintenance of … cables or pipelines” but that “the delineation of the course for the laying of such pipelines on the continental shelf is subject to the consent of the coastal state.” 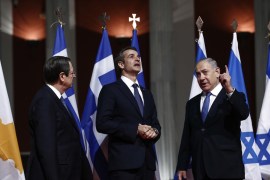 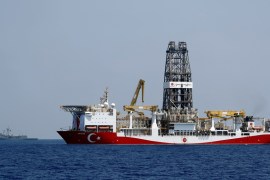 Nicosia says Ankara has used ‘bullying tactics of an era long gone’ by sending another drilling ship to its coast.