The United Nations mission in Libya has express deep concern over efforts to disrupt oil production in the war-torn country and urged all sides to exercise restraint.

“This move would have devastating consequences first and foremost for the Libyan people who depend on the free flow of oil for their well-being,” the mission said in a statement on Saturday, the eve of a highly-anticipated summit in Germany aimed at relaunching peace efforts.

It came after tribes close to renegade military commander Khalifa Haftar, whose forces control much of eastern Libya, called for a blockade of coastal oil export terminals to protest against a Turkish intervention in support of the country’s UN-recognised Government of National Accord (GNA).

Libya‘s National Oil Company (NOC) had also warned on Friday against threats to block oil exports, saying it “strongly condemns calls to blockade oil ports ahead of the Berlin conference on Sunday”.

Turkey has backed the Tripoli-based GNA as it faces an offensive by Haftar’s forces to seize the capital.

After nine months of fighting, which has killed more than 2,000 people, a ceasefire came into effect on Sunday backed by both Ankara and Moscow, which is accused of supporting Haftar.

However, after Turkey deployed troops to support the GNA, tribes close to Haftar threatened to close down the “oil crescent” – a string of export hubs along Libya’s northeastern coast under Haftar’s control since 2016.

His troops have also mobilised to block any counterattack on the oil crescent, the conduit for the majority of Libya’s crude exports.

“The closure of the fields and the terminals is purely a popular decision. It is the people who decided this,” Ahmad al-Mismari, spokesman for pro-Haftar forces, told al-Hadath television late on Friday.

The tribes also called for the “immediate” closure of the Mellitah, Brega and Misrata pipelines.

Commenting on the closures, the UN envoy to Libya said on Saturday he hoped but “could not predict” whether oil ports would be reopened in a few days.

“If the thing is not solved between today and tomorrow I expect the issue to be raised, yes,” Ghassan Salame told Reuters news agency, referring to the meeting in Berlin that will try to broker a reopening of the ports.

The head of the eastern Zouaya tribe told AFP news agency that blocking exports would “dry up the sources of funding for terrorism via oil revenues”.

NOC chairman Moustafa Sanalla said the oil and gas sector was “vital” for the Libyan economy, as it is the “single source of income for the Libyan people”.

“The oil and the oil facilities belong to the Libyan people. They are not cards to be played to solve political matters,” he added.

“Shutting down oil exports and production will have far-reaching and predictable consequences.”

Meanwhile, a port engineer and witnesses told Reuters news agency that protesters in eastern Libya entered the Zueitina oil terminal on Friday and announced its closure in response to the calls by tribal leaders.

However, the Zueitina engineer said “the terminal is still receiving oil and a tanker entered it today”.

Scores of protesters reportedly erected a large tent outside the terminal. They read a statement saying they planned to shut all oil terminals in eastern Libya.

The oil-rich North African state has been in turmoil since a 2011 NATO-backed uprising that overthrew and killed longtime ruler Muammar Gaddafi.

Its oil sector, which brings in almost all of the state’s revenues, has frequently been the target of attacks.

Sanalla noted the consequences of exports and production being shut down for an extended period could be devastating.

“We face collapse of the exchange rate, a huge and unsustainable increase in the national deficit, the departure of foreign contractors, and the loss of future production, which may take years to restore,” he said.

“This is like setting fire to your own house.”

Haftar will come under pressure to end his campaign to take Tripoli at the summit in Berlin, which is aimed at ending foreign interference and division over Libya, according to the UN.

The conference will seek to agree to six points including a permanent ceasefire, implementation of a much-violated UN arms embargo and a return to political efforts for peace, UN Secretary-General Antonio Guterres said last week. 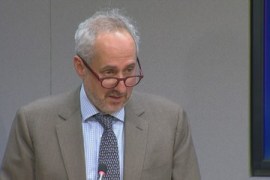 Haftar did not sign up to ceasefire deal in Moscow but agreed to comply with terms before talks in Berlin. 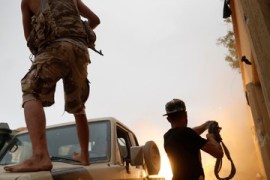 Some fighting has resumed in Libya after ceasefire talks stalled in Moscow. But not all hope of a deal is lost.