Yangon, Myanmar – Chinese President Xi Jinping arrives in Myanmar on Friday on his first trip to the country since 2009 and is expected to step up investment in the Southeast Asian nation including in the conflict-racked state of Rakhine, a key link in China‘s Belt and Road initiative.

Myanmar’s Deputy Minister of Commerce Aung Htoo told reporters before the visit that Xi would sign agreements related to the Kyaukphyu Special Economic Zone and $1.3bn port in Rakhine, where a brutal military crackdown in 2017 led hundreds of thousands of Rohingya to flee over the border to Bangladesh.

“Xi has visited almost all ASEAN countries since assuming power in 2013, but Myanmar had been left out until now,” Yun Sun, director of the China programme at the Stimson Center, said in an email to Al Jazeera.

When the National League of Democracy under Nobel Peace Prize winner Aung San Suu Kyi swept into power in 2015, there was an expectation around the world that it would mark a new age of human rights and democracy in a country that had spent decades under military rule.

But despite the intense criticism by many Western countries on its handling of the Rohingya crisis, China has been able to rebuild its influence with its southern neighbour, analysts said.

Sun said the fallout over the Rohingya crisis and Myanmar’s current isolation in the international community, had given China an opportunity to win Myanmar over through a “gesture of support”.

“The trip would not happen without the Chinese side being certain about the direction of the bilateral relations going in a positive direction. In other words, the Chinese are confident that China has regained its damaged influence and repaired its tarnished image in the country,” Sun said.

In an article published in the state-run Global New Light of Myanmar a day before his arrival, Xi expressed confidence that the projects would progress, specifically mentioning the Kyaukphyu project, as well as the China-Myanmar Border Economic Cooperation Zone and New Yangon City developments.

China and Myanmar “need to deepen results-oriented Belt and Road cooperation and move from a conceptual station to concrete planning and implementation,” he wrote.

The Kyaukphyu port would give China direct access to the Indian Ocean, allowing it to bypass the Strait of Malacca.

Around 80 percent of China’s oil imports pass through the narrow strait between Malaysia and Indonesia, leaving it vulnerable to blockades or unrest over the disputed South China Sea.

The port, coupled with a planned railway from Kyaukphyu to China’s Yunnan province would not only bypass the strait but also be more direct.

Joshua Kurlantzick, senior fellow for Southeast Asia at the Council on Foreign Relations said Myanmar was “probably moving closer to China” but emphasised that the two countries had been “very close” for years.

“China has been the dominant strategic actor in Myanmar for several decades. But Xi is seeking to keep it that way, with a state visit,” he said in an email to Al Jazeera.

Kurlantzick also said the visit was “consistent with China’s desire to remain the pre-eminent external power in Myanmar” and blunt the influence of Japan, which is pushing its own infrastructure projects.

Despite the two countries’ close relationship, Myanmar has maintained a certain caution about Chinese development.

“I don’t think they are going to accept everything and anything China proposes,” Sun said.

“On that, Burma is categorically different from Cambodia.”

Where Cambodia is effectively a one-party state, Myanmar is at least semi-democratic, and an election is due later this year.

People have shown they are willing to question development.

The China-backed Myitsone Dam in Kachin State, for example, was delayed indefinitely in 2011 after mass protests from local residents and attacks from the Kachin Independence Army.

Xi himself might have an eye on the election too.

The visit “may provide Xi and his entourage a chance to assess the various Myanmar politicians who may be contesting for the leadership in the next national elections,” Kurlantzick said.

Local media has reported that Xi plans to meet representatives of minor parties and in the run-up to the visit, Chinese officials met the leaders of various ethnic armed groups in Myanmar which have been fighting the central government for decades.

Both groups have carved out fully autonomous fiefdoms within Myanmar’s borders and have close ties with China. The government of Wa State welcomed Xi’s visit in a statement, expressing “delight” and hope that the two countries would “live in harmony”.

Guoxiang also met the Arakan Army (AA), an ethnic armed group that has been a significant thorn in the Myanmar government’s side, as it tries to carve out a territory of its own in Rakhine – the same state where the Kyaukphyu port is located.

While the AA has complained that the Myanmar government pursues development projects without input from the locals, the group does not oppose Chinese investment.

China acts as an intermediary between the AA and the military, a mutually beneficial relationship that gives the rebel group a communication channel and makes China an essential part of the peace process. 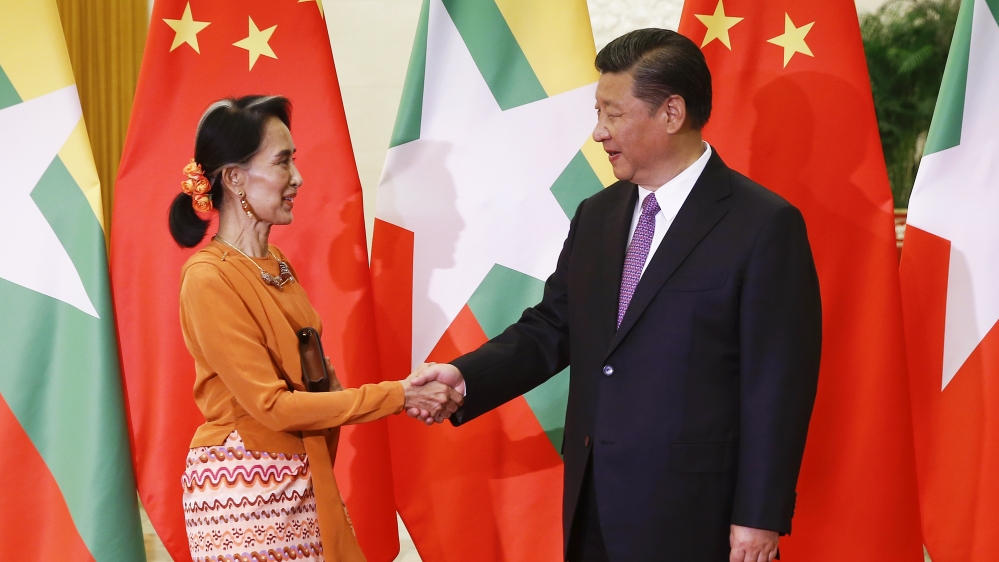 The Myanmar government is also eager to repair the image of Rakhine after years of violence.

“Having a major project in Rakhine would be a boon to the Myanmar government’s claims of boosting stability and development in Rakhine State,” Kurlantzick said but added that focusing on development before accountability for human rights violations was “troubling” to some.

Amnesty International is among those troubled, writing in a press release that China must stop shielding Myanmar’s generals from international accountability for human rights violations against the Rohingya.

“With major economic and infrastructure agreements expected to be signed during President Xi’s visit, the absolute lack of transparency over such agreements is deeply disturbing,” said Amnesty’s Regional Director, Nicholas Bequelin, in the statement, adding that investment can only help improve human rights if it benefits the people on the ground.

While the AA may welcome Chinese development, many Rakhine people feel differently.

“We hold the motto that no development without genuine peace,” said Ting Oo, General Secretary of the All Arakan Students’ & Youths’ Congress.

“Right now, most of the development projects across Myanmar are planned and implemented by only a handful of people in power.”

Ting Oo said it made no difference whether the development was Chinese or Western, as the current system for approving projects lacked transparency, did not include local people and was poorly regulated.

“Without such minimum requirements, we see no points in supporting a development project, however great the incentives are,” he said.