The United States is imposing additional sanctions on Iran as a result of Tehran’s attack on US troops in Iraq this week, according to the US treasury secretary.

Steven Mnuchin, Treasury secretary, and Mike Pompeo, secretary of state, said in a joint news conference on Friday that the new measures would target eight senior Iranian officials involved in “destabilising” activities in the Middle East, as well as Tuesday’s missile attack.

Among the senior Iranian officials targeted in the new measures were Ali Shamkhani, the secretary of Iran’s Supreme National Security Council, Mohammad Reza Ashtiani, the Iranian armed forces deputy chief of staff and Gholamreza Soleimani, the head of the Basij militia, a volunteer force loyal to the government.

Al Jazeera’s Dorsa Jabbari, reporting from Tehran, said there was no official reaction from Iran on the news.

“Iranians usually don’t respond to these kind of sanctions. This is becoming a regular occurrence here. We’ve had a plethora of sanctions over the last six months on the country’s supreme leader, foreign minister and now some of the high-ranking officials,” she said.

She also said none of the people mentioned in the sanctions would really be affected as they had no interests in the US or ever set foot in the country.

“These are seen more like a political move,” she said.

A sanctioned commander of the Islamic Revolutionary Guard Corps, Mohsen Rezaie, said on Twitter that the sanctions were “symbolic”.

“Imposing sanctions is symbolic for America and for me because this measure will have no economic impact and will not compensate for [Iran’s] missile barrage [on US targets] and will not bring respect for Washington,” Rezaie said. “It is symbolic for me … And I am proud to be sanctioned by America.”

Mnuchin said US President Donald Trump would issue an executive order imposing sanctions on anyone involved in the Iranian textile, construction, manufacturing or mining sectors.

Separate sanctions would also be imposed against the steel and iron sectors, he said.

“As a result of these actions, we will cut off billions of dollars of support to the Iranian regime,” Mnuchin said, adding that waivers would be issued for anyone who would help with the investigation of Wednesday’s plane crash that killed 176 people in Iran.

He said the sanctions hitting Iran’s economy would continue “until the regime stops the funding of global terrorism and commits to never having nuclear weapons”.

Netanyahu said in a statement that the “terror regime” in Iran “oppresses the Iranian people and threatens world peace”.

Al Jazeera’s Kimberly Halkett, reporting from Washington, DC, said the new sanctions were seen as a “face-saving measure by the US president”.

She said Trump promised that if Iran struck back against the US after the Soleimani assassination, he would not hesitate to act.

“But when the strikes came, we did see hesitation on the part of the president, at least militarily,” she said.

The administration has already reinstated all the US sanctions that were eased under the 2015 nuclear deal, which has caused significant economic hardship in Iran and cut its oil exports to historic lows.

Iran carried out the missile strikes in retaliation for the US drone attack that killed Iran’s Revolutionary Guard General Qassem Soleimani in Baghdad last week. 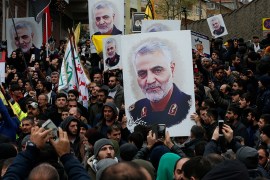 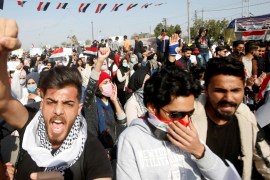 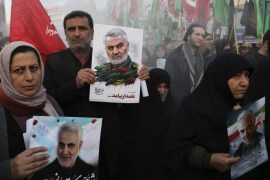