Indian families, sitting on the world’s biggest private stash of gold, are rushing to borrow against their jewelry as the precious metal rallies to records and the coronavirus pandemic fuels an economic downturn. Now, financial firms and banks are using that demand to lure more customers from pawnbrokers and money lenders.

The added competition could lower borrowing costs for Indian consumers, who in desperate moments of financial stress often pay exorbitant rates to informal lenders to use gold as collateral. Firms like HDFC Bank Ltd. and Federal Bank Ltd. are expanding the loans they make against the precious metal. India’s gold lenders, such as Muthoot Finance Ltd. and Manappuram Finance Ltd., are making it easier for their clients to borrow.

Manappuram is offering gold-backed loans at the customer’s doorsteps via a 24-hour bank network since people are reluctant to leave their homes while coronavirus cases are surging in India. And it has staff and vehicles on standby to service client requests. HDFC Bank is boosting the number of branches offering such loans in rural India, where money lenders remain the norm.

The World Gold Council estimates that Indian households are sitting on a $1.5 trillion hoard of gold, the biggest of its kind, largely made up of jewelry, which families often inherit or are gifted at weddings. Gold is worn at special occasions and can contribute to a substantial portion of the marriage dowries of women. It also doubles up as an insurance policy and retirement plan in a nation lacking robust social welfare systems.

As a result, India’s demand for gold-backed loans has only risen as its global price has approached $2,000 an ounce, allowing families to borrow larger amounts against their holdings.

Still, consultancy KPMG estimates that 65% of India’s $46 billion gold loan industry is dominated by informal lenders, whose interest rates can range from 25% to 50%. In many parts of India, particularly rural areas, the pawning of a woman’s ornaments is often viewed as a last recourse for families who have run out of options.

“Conventionally the country has pawn shops at the end of every street and they have been mostly working with exorbitant margins,” said Gnanasekar Thiagarajan, director at Commtrendz Risk Management Services Pvt. “A professional setup like the gold loan companies, who offer transparency and finer pricing are likely to see huge volumes to move from there.”

Banks have long had a limited presence in the gold loan industry but are attempting to make bigger inroads this year as other sources of income have dried up. They want to reach more consumers like Paul Fernandes, who pledged some of his wife’s gold ornaments at a local bank in the coastal state of Goa to pay for his children’s education fees in June.

Fernandes, who worked as a head waiter on a cruise ship, hasn’t drawn a salary in three months since his contract with a U.K.-based company expired in March and he had to return home. The quick loan was a lifeline.

“With no clarity when the cruise industry will revive after being grounded by the virus, I don’t know how soon I will be able to work again,” he said. “We have in the past borrowed against gold and it is our go-to option to tide over short-term cash needs rather than asking money from relatives.”

Fernandes, who declined to say which bank he borrowed from, said he is being charged an interest rate of 8.5%. He chose to go to a bank instead of a pawnshop because banks are safer and charge lower interest rates. He was asked for minimal documentation of only a national identity card and residence proof and the entire loan process took less than an hour.

Gold loans allow consumers to draw upto 75% of the value of the metal. Banks can charge interest rates of about 7% to 15% while Manappuram and Muthoot can charge rates from 12% to 29%.

With transaction times to process gold loans falling to less than an hour and collateral that’s easy to sell in the event of default, India’s market for such lending is set to expand by at least 34% to 4.6 trillion rupees ($61 billion) in two years to March 2022, according to an estimate by KPMG. 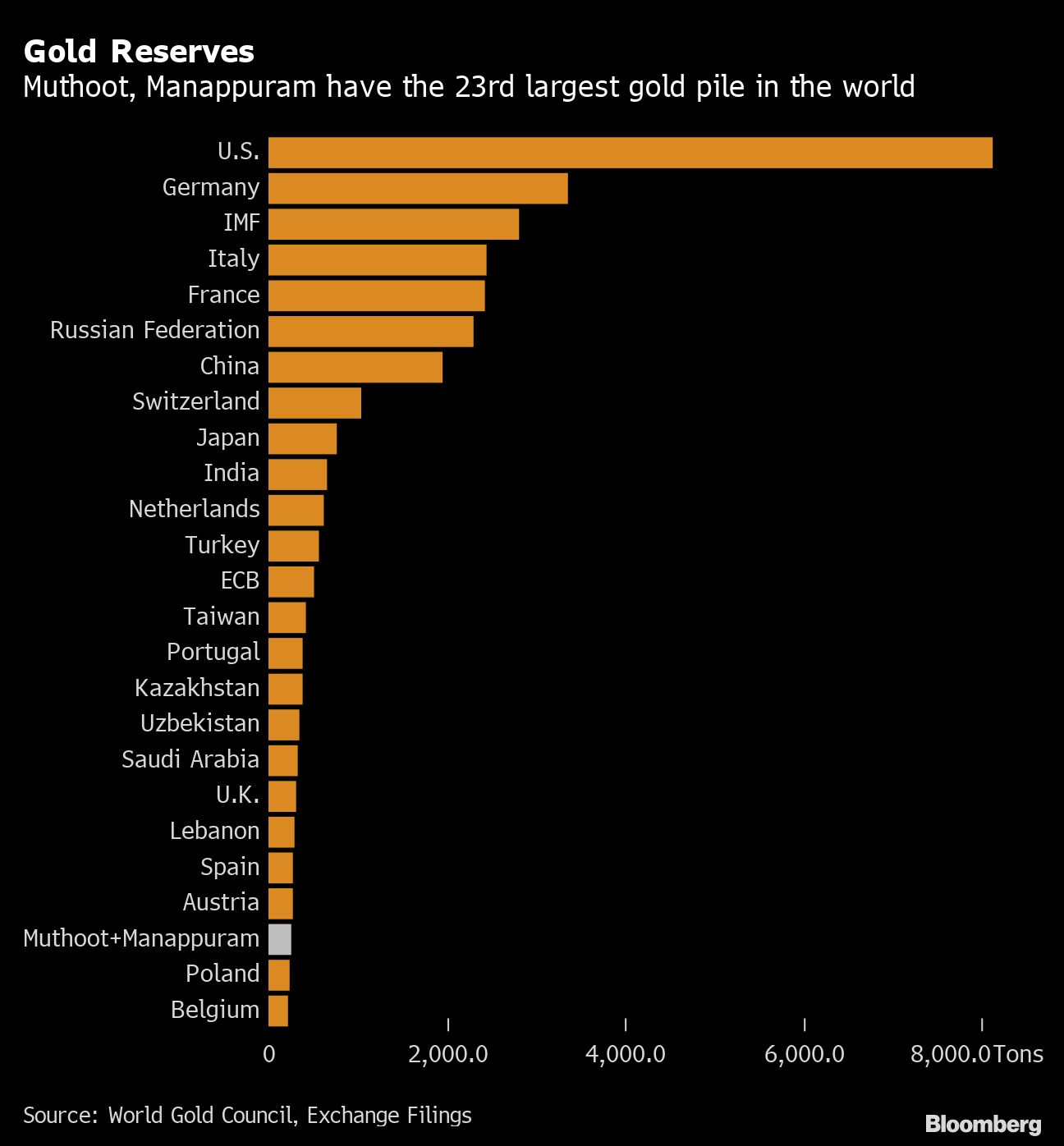 Virus-related lockdowns in India have shuttered businesses and left millions jobless, pushing India’s economy toward its first annual contraction in four decades. Bank loans may not grow at all in the year ending March 31, 2021, according to the local unit of S&P Global Ratings. That makes gold-backed loans particularly important.

HDFC Bank is slowly making inroads into the market and plans to raise the number of branches offering gold loans in rural areas this year from 800 in the previous fiscal year. “The availability of the asset and the ease of securing a loan have made this a convenient and viable credit option,” the bank said in its annual report in June.

Kerala-based Federal Bank, which saw its gold loans grow 36% in the quarter ended June from a year earlier, says they are an area of high focus. “It’s spoken about at least once every day by the senior teams,” Managing Director Shyam Srinivasan said in an analyst call on July 15. 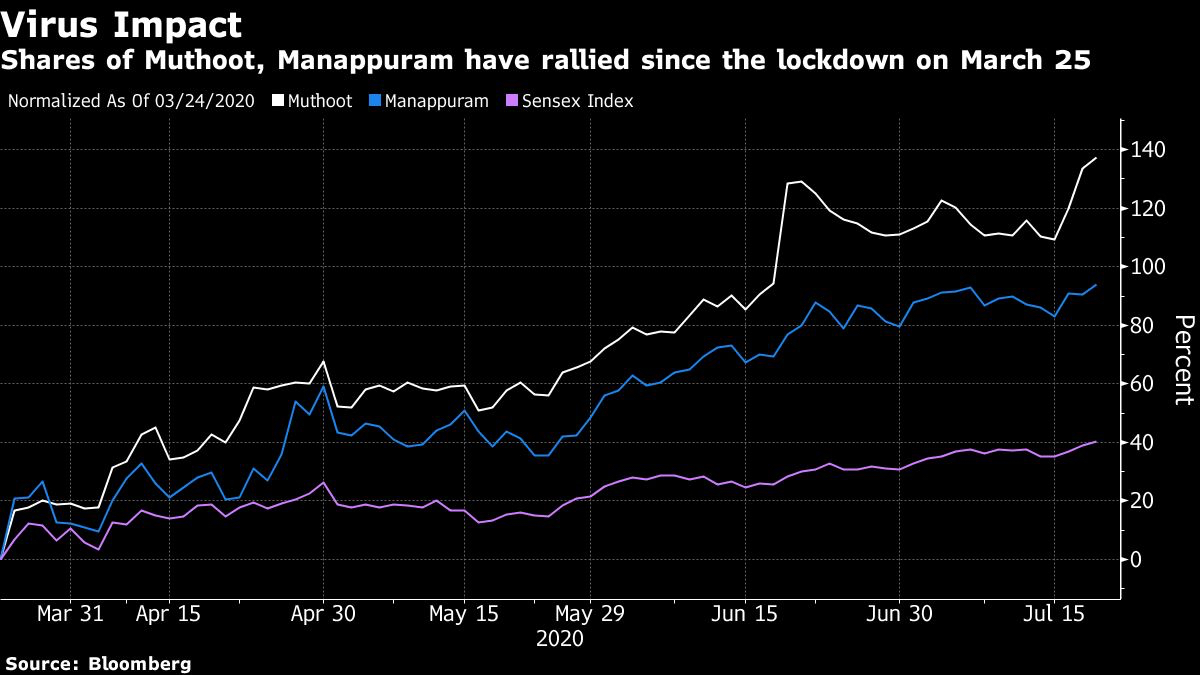 The longer tenure, as compared to the 90 days or 120 days it now allows, will help customers retain their ownership of the pawned ornaments and reduce risk of auctioning the jewelry if repayment obligations are not honored within the term, said Umesh Mohanan, executive director of Indel Money.

In the formal lending sector, Muthoot and Manappuram remain the leaders on gold-backed loans. As of March 31, they held 248.4 tons of gold pledged by customers, equal to about half the European Central Bank’s reserves. Shares of the two companies have rallied this year, with India’s largest gold lender Muthoot’s stock more than doubling since the Indian government announced the first lockdown restrictions in March.

The highest demand has from the lower middle class, or those with incomes of 13,000-15,000 rupees, said V.P. Nandakumar, chief executive officer of Manappuram.

The push by the banking sector could help the market for gold loans grow by 20% to 25% this fiscal year amid demand from small businesses and agricultural operations that are often family owned, said P.R. Somasundaram, managing director for India at the World Gold Council.

“Gold loans are growing but once the lockdown is lifted and some sort of normalcy returns you will see a big jump,” he said. “When most businesses open they will require capital.”