By
By Anooja Debnath
Bloomberg

For anyone who thinks political risk is taking a back seat for currency markets, take a look at the Swiss franc’s rally.

Following an escalation in Middle East tensions and the risks around Britain’s departure from the European Union, the currency has advanced to its strongest level against the euro since April 2017. Back then, worries that France could elect a euroskeptic president boosted the franc.

The currency’s latest ascent coincides with gold prices surging above $1,600 an ounce for the first time since 2013 and fellow haven the Japanese yen hitting its strongest level in three months against the dollar. While those other assets took a step back on Wednesday as the chances of further conflict between Iran and the U.S. seemed to be contained, the franc’s moves reflect investors are still on edge. 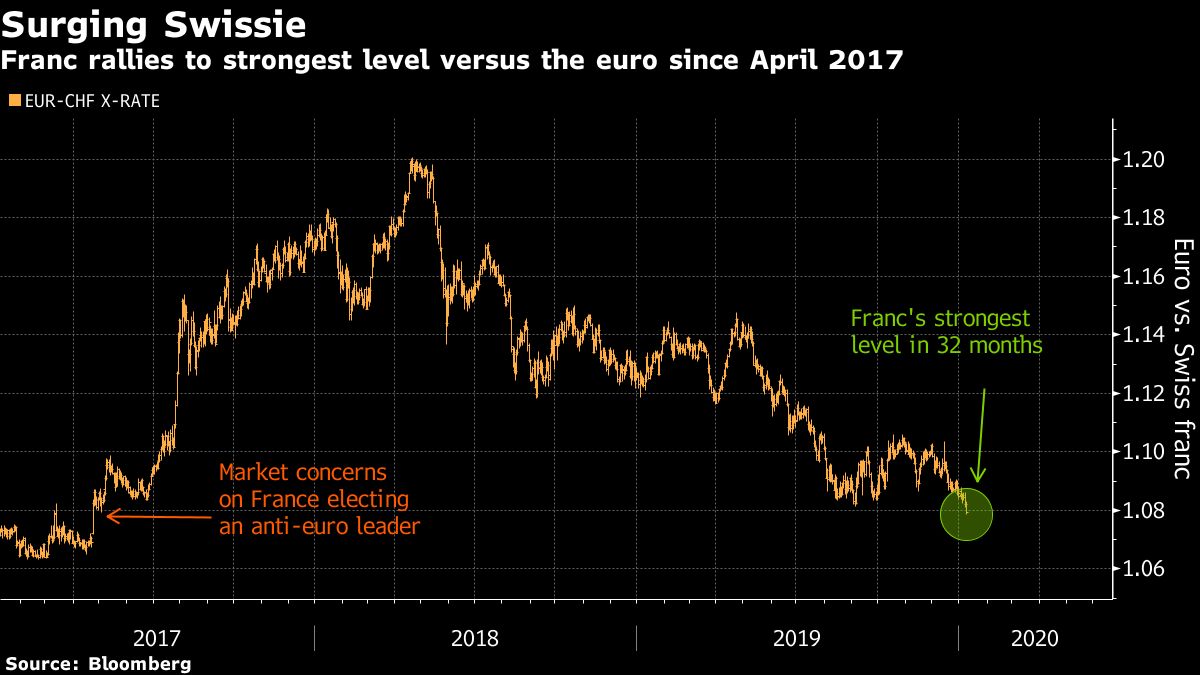 “The Swissie is the regional safe haven, so it benefits more compared to the yen if it is a European risk,” said Thu Lan Nguyen, a currency strategist at Commerzbank AG. “If the U.K. sticks to its stance of not allowing for an extension of trade talks, this would mean a hard Brexit after all by year-end.”

European Commission President Ursula von der Leyen warned on Wednesday it will be “impossible” to get a full deal before Boris Johnson’s end-2020 deadline, ahead of a meeting with the British prime minister.

The Swiss currency traded up 0.3% to 1.0791 per euro, taking its gains in the past month to 1.6%. That has outpaced the yen, which has fallen against the common currency over the same period.

“I suspect that the flare-up of risk aversion on the back of the standoff between the U.S. and Iran likely burnished the franc’s credentials as a safe haven in part because the risk-off move triggered the unwinding of some carry trades funded in francs,” said Valentin Marinov, the head of G-10 currency research at Credit Agricole SA.

The franc has breached the 1.08 per euro level, which is seen as key to whether the Swiss National Bank could step in to try to weaken its currency. It was around this level that the central bank was thought to have intervened in markets to limit the franc’s ascent in 2019.

Sight deposits, the cash commercial banks hold with the SNB, are considered to be an early indicator of policy makers’ moves in foreign-exchange markets.

The near-1.08 level touched last year coincided with sight deposits “picking up quite noticeably,” according to Marinov. That level could be “a floor under the Swiss franc-crosses.”