An Iranian oil tanker at the centre of a major diplomatic dispute with the United States reached its destination and sold its cargo, Iran‘s foreign ministry said, amid accusations the vessel was transporting crude to Syria in violation of EU sanctions.

The tanker Adrian Darya 1, previously known as Grace 1, went dark last week and was later photographed by a satellite near the Syrian port of Tartus.

The ship was blacklisted by Washington last month after being released from Gibraltar, where it was seized in July by the British Royal Marines and held for six weeks on suspicion it was delivering oil for Tehran’s ally Damascus.

The British overseas territory released the ship – despite protests by the US – after it said it received written assurances from Iran that the vessel would not head for countries under EU sanctions.

Tehran later denied it made any promises about the ship’s destination.

Maritime tracking service TankerTrackers said as of Sunday night the Adrian Darya was off the coast of Syria’s Tartus, but had not unloaded the oil.

“Right now it’s parked right outside of Syria,” Sigal P Mandelker, a US Treasury official, told journalists in Abu Dhabi. “So it’s yet another game of deception that we see them engaged in that we think the world needs to open its eyes to.”

The tanker took centre stage recently amid a crisis roiling the Gulf region and escalating tensions between Washington and Tehran.

But Trump reimposed crippling financial penalties on Iran after pulling out of the accord as part of a so-called “maximum pressure” campaign.

Washington also blocked the Islamic republic from selling crude oil, a crucial source of income for the country.

Mandelker confirmed the Trump administration would continue to impose sanctions on whoever purchases Iran’s oil, or conducts business with the country’s Revolutionary Guard, a military unit answerable only to Supreme Leader Ali Hosseini Khamenei.

“We will continue to put pressure on Iran and as President [Trump] said, there will be no waivers of any kind for Iran’s oil,” said Mandelker.

Washington initially granted Tehran eight waivers when it reimposed sanctions after withdrawing from the nuclear deal, but announced in April those would not be renewed.

The same month, the US declared the Revolutionary Guard a foreign “terrorist organisation”, the first time Washington named a military force of a nation as such. US authorities later said the guard was the true owner of the Adrian Darya 1.

Iran’s crude oil exports were slashed by more than 80 percent because of the reimposed sanctions.

In retaliation to Washington’s moves, Iran has been reducing its commitments under the deal since May, pressuring European signatories to the pact to protect Tehran’s interests.

France, Germany and Britain have tried to launch a barter trade mechanism with Iran to protect it from US sanctions, but have struggled to get it off the ground.

In addition to saving the deal, Tehran wants to restart selling its oil but the American sanctions stand in the way.

Iranian officials recently said the country wants to export a minimum of 700,000 barrels per day (bpd) of its oil and ideally up to 1.5 million bpd if Western partners to the nuclear deal want to negotiate to save the accord.

Cornel Feruta, acting chief of the United Nations’ atomic watchdog, said on Sunday “active cooperation” from Iran was needed amid the apparent unravelling of the deal.

“We do of course express the view that timely and active cooperation is very important, and also the fact that time is very important,” said Feruta, after a meeting with the head of Iran’s nuclear programme, Ali Akbar Salehi, in Tehran. 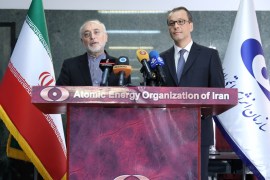 Nuclear chief Ali Akbar Salehi says Iran does not have to uphold its commitments as EU countries have not met theirs. 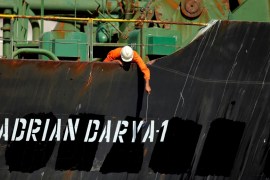