China took steps to slow the yuan’s descent as the effects of Monday’s tumble continued to weigh on markets.

The People’s Bank of China set the daily currency fixing stronger than analysts expected and announced the planned sale of yuan-denominated bonds in Hong Kong. The moves, which came hours after the U.S. labeled the country a currency manipulator, helped drive the offshore yuan higher.

A weak fixing on Monday had helped send the yuan past 7 for the first time in more than a decade, triggering a wave of selling across markets from Asia to the U.S. The yuan’s slump – the worst since 2015 – brought back memories of the capital flight that year that spurred China to spend more than $500 billion of its reserves.

News that the Trump administration has formally labeled China a currency manipulator is adding pressure on Chinese authorities.

“The PBOC is sending signals that it would like to mitigate yuan depreciation,” said Frances Cheung, head of Asia macro strategy at Westpac Banking Corp. in Singapore. “The offshore yuan had faced resistance around 7.1 intraday a few times. I expect it to hover around this level near term.” 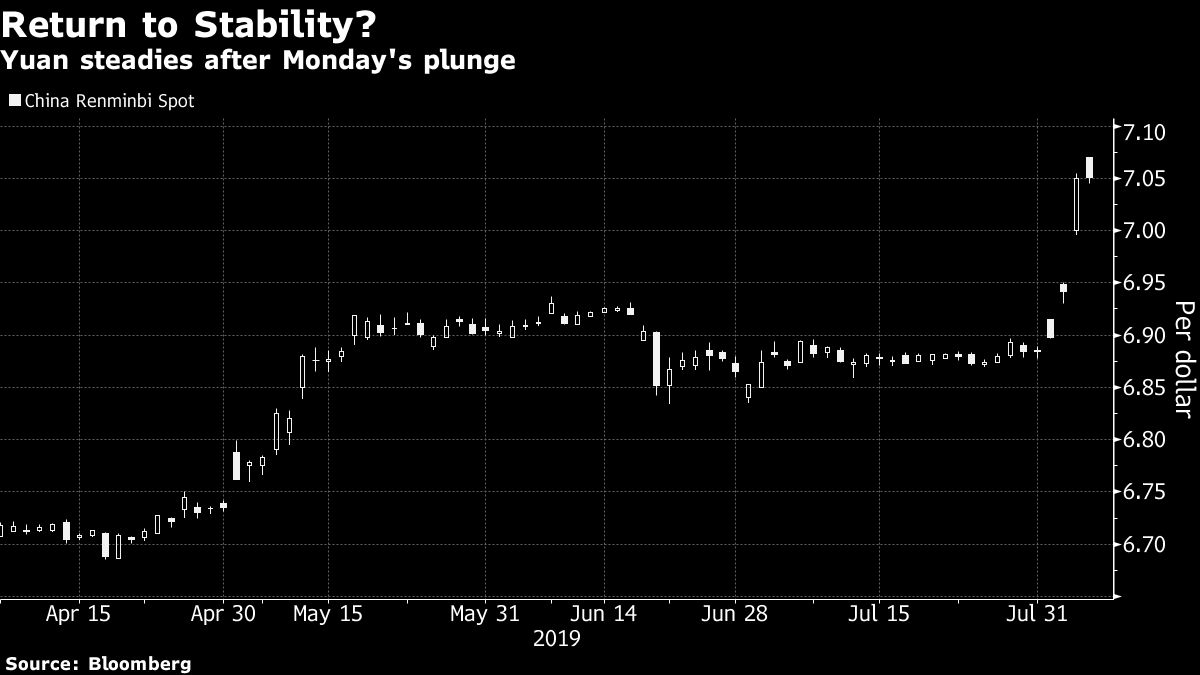 China’s central bank will sell 30 billion yuan ($4.2 billion) of bills in Hong Kong on Aug. 14, according to a PBOC statement Tuesday. The move typically drains liquidity offshore, making it more costly to short the Chinese currency.

The announcement came after Yi Gang, governor of the central bank, said Monday that “the yuan will remain a strong currency in spite of recent fluctuations.” He also said China won’t use its currency as a tool in its dispute with the U.S.

“The PBOC had the fixing stronger than 7 to correct herding behavior yesterday,” said Stephen Chiu, a strategist at Bloomberg Intelligence.

“It’s a message to the U.S. – we aren’t manipulating the currency weaker. If markets drive dollar-yuan rate even higher and out of hand, I don’t think the PBOC will sit there doing nothing.”

Wall Street was quick to react to Monday’s sharp depreciation, with currency analysts rushing to cut their yuan targets. Strategists at Bank of America Corp. lowered their year-end forecast to 7.3 per dollar from 6.63, based on their expectation that China wants a weaker currency to soften the impact of higher tariffs. Citigroup Inc. said the yuan may tumble to 7.5 if tensions escalate.

“Trade and currency wars are escalating by the day,” said Philip Wee, a currency strategist at DBS Group Holdings Ltd., adding the yuan and other Asian exchange rates will drop further. “Naming China a currency manipulator could open the door for U.S. tariffs to eventually increase to more than 25% on Chinese goods.”

– With assistance from Claire Che.