A trade and diplomatic dispute between two of the world’s top makers of hi-tech products has just hit a new low. On Wednesday, Japan officially kicked South Korea off a list of favoured destinations for exports of components and materials used in smartphones and computer chips.

Japan’s new restrictions could at least temporarily damage technology-related supply chains around the world, possibly affecting companies ranging from Apple in the United States to ZTE in China.

But the tensions between the two US allies go back decades.

How did the Japan-South Korea dispute get this far?

The latest dispute began last year when the High Court of the Republic of Korea (ROK), the formal name for South Korea, ordered Japanese companies to pay compensation to South Koreans forced into labour during World War II. The two countries disagree over whether a 1965 treaty that normalised relations completely resolved the issue.

South Korea responded with anger, protests and boycotts of Japanese goods. On August 12, it created a list of countries that do not abide by internationally accepted export controls and made Japan the first country on it. And 10 days later, South Korea said it would terminate an intelligence-sharing agreement when it expires in November.

“The more fundamental and critical factor behind [the dispute] is distorted mutual trust between the two countries,” Yoshikazu Kato, adjunct associate professor at the University of Hong Kong’s Asia Global Institute, told Al Jazeera. “This is the most important factor to understand the current tensions between Japan and ROK.”

In July, Japan imposed restrictions on the export to South Korea of three chemicals crucial to the manufacture of semiconductors, one of South Korea’s biggest export industries.

And earlier this month, Japan said it would remove South Korea from its “white list” of preferred trading nations, a move that takes effect on Wednesday.

The white list comprises countries that are given preferential treatment in regards to export licensing, explained Waqas Adenwala, an analyst at the Economist Intelligence Unit.

Japanese companies can fast-track customs procedures when exporting hi-tech goods and sensitive substances – which can be diverted for military applications – to countries on the list, said Lloyd Chan, an economist at Oxford Economics.

There are now 26 countries on the white list. South Korea was the only Asian country.

Why is Japan excluding South Korea from its list of approved export destinations?

Japan dropped South Korea from its white list citing national security concerns over what it described as a lack of export control measures that could cause sensitive substances and technology to end up in rogue nations such as North Korea.

“I think the most critical reason should be trust; mutual trust between Japan and the Republic of Korea has been seriously undermined,” said the University of Hong Kong’s Kato.

On July 1, the Japanese Ministry of Economy, Trade and Industry (METI) said the relationship between the two countries, including in “the field of export control and regulation has been significantly undermined”. METI said it found some items had been exported to South Korea without adequate controls.

South Korea has denied the accusation.

Why are relations between Japan and South Korea so tense?

“The grievances are rooted in their historical dispute as South Korea is still seeking to resolve the issue of Korean workers forced to work for Japanese firms [without pay] during the colonial era,” Adenwala said. “Another long-standing issue is the case of ‘comfort women’ as [many] Korean women were forced into sex slavery for the Japanese imperial army.”

On top of that, the two countries have a territorial dispute over Liancourt Rocks, a group of small islets in the Sea of Japan. While they are administered by South Korea, Japan has challenged its sovereignty to them.

“The historical issues should not be underestimated,” said Kato.

At the same time, the administration of South Korean President Moon Jae In “has tried to distinguish its policies from his predecessor by conducting more aggressive and strong policies in historical issues toward Japan”.

South Korea’s move to abandon the General Security of Military Information Agreement (GSOMIA) – an intelligence-sharing pact – will destroy trust and “create a negative impact in terms of the balance of power and basic stability in the Asia Pacific region,” said Kato.

Which products has Japan placed under restrictions?

Almost 1,120 products could be affected, including materials and equipment that could have military use; chemicals such as fluorinated polyimide, photoresists and hydrogen fluoride used in chip manufacturing; chip-making parts; machines and equipment; integrated circuits; capacitors; adhesives for flat panel displays; ball bearings; and industrial robots.

“These strategic items are crucial for the production and development of hi-tech goods in [South] Korea, such as semiconductors and organic electroluminescent displays (OLEDs) for cutting-edge foldable smartphones. Korea’s economy is very dependent on semiconductors, which account for about 20 percent of its total exports,” said Chan of Oxford Economics.

What’s so special about these products?

“A lot of products are used in South Korea’s export-oriented industries, such as the manufacturing of semiconductors, cars and petrochemicals. The removal from the white list would result in delays in the supply chain,” said Adenwala.

Some of the products may also have military applications. Japan says this places a duty on it to ensure they don’t fall into the wrong hands.

How could South Korean tech manufacturers be affected?

South Korean corporate groups such as Samsung and SK Hynix are among the biggest producers of semiconductors in the world and a big part of South Korea’s economy.

“Japan’s regulatory approval can take up to three months. Korea’s tech manufacturers may face delays in procuring crucial supplies from Japan, which could force them to cut production and affect the development of cutting-edge products,” Chan said. “While Korean firms attempt to diversify their supply sources outside of Japan, they may either encounter quality issues or fail to get adequate supplies to fulfil their production orders.”

More than 90 percent of fluorinated polyimide that South Korea imports comes from Japan, said Kato. South Korea’s government says it could benefit from the dispute by forcing it to diversify its supplies or boost its capacity to produce its own materials.

Chan believes the damage will be reciprocal.

“The Japanese firms that have exported these hi-tech products to the ROK over the years are upset at the circumstances and will try to diversify their export destinations,” said Chan.

“While we do not expect Korean firms to find substitutes for these materials in the short term, they may still be able to get their supplies through a third country, such as China, Taiwan, the US and the Netherlands,” said Chan.

Could Japanese firms be affected?

Japanese companies also buy semiconductors, machines and equipment from South Korea and could be affected by negative shocks to global supply chains.

“South Korean firms are the biggest clients for Japanese firms producing the chemicals used in the manufacturing of semiconductors. Therefore, they are likely to suffer from their own government’s decision too,” said Adenwala. “Meanwhile, Japanese firms like Sony, etc also import finished semiconductor products from South Korea … and therefore they are likely to be impacted as well.”

Ultimately, however, the changes are unlikely to cause permanent damage, analysts say.

“Even without the preferential treatment for the ROK, the firms that export these critical products to [South Korea] could still get permission by METI,” said Kato. “It just takes more time and steps.” 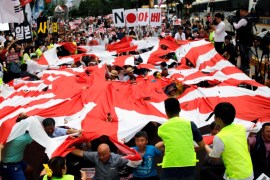 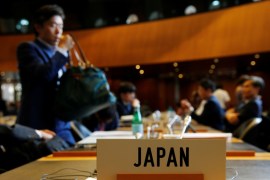 Tokyo’s curbs on tech exports to South Korea may score political points at home, but could hurt some top Japanese firms.