By By Natasha Doff and Olga VoitovaBloomberg

The ruble headed for its weakest close in two months and Russian borrowing costs jumped after the U.S. stepped up measures against countries it has sanctioned for using chemical or nuclear weapons.

The executive order, released by the White House late Thursday, includes curbs to international financing and U.S. bank loans. Russia isn’t named, but it has been facing another round of U.S. penalties over the 2018 nerve-agent attack on a former Russian spy in the U.K. The Kremlin denies any role in the poisoning.

Adding to the shock for investors was Russia’s position as one of the most popular trades in emerging markets in recent months due to its high real yields. Foreigners now own about a third of the nation’s local-currency debt market, the highest level in more than a year.

“It’s partially a U.S. internal political question how it plays out and we investors have little insight into it,” said Viktor Szabo, who invests in Russia as a money manager at Aberdeen Asset Management in London. “Some profit-taking is warranted” given heavy positioning in Russian assets, he said. 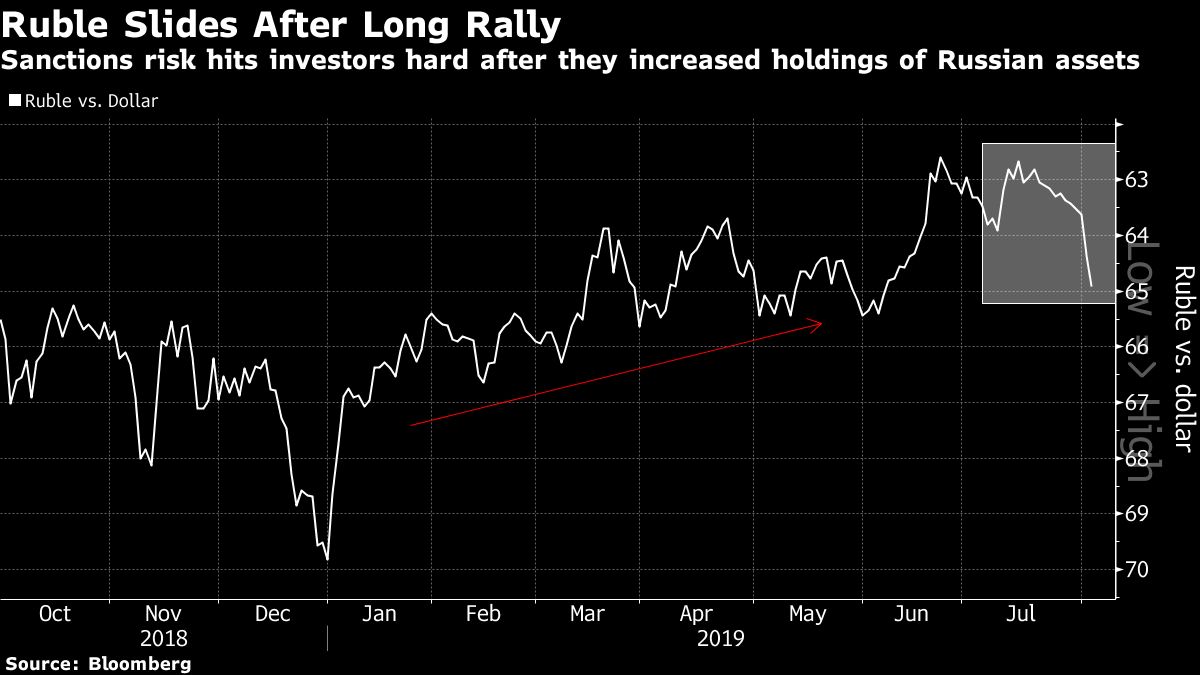 The ruble dropped as much as 1.2% to 64.92 versus the dollar and 10-year ruble bond yields jumped 8 basis points to 7.43%. U.S. President’s Donald Trump’s latest salvo in the trade war with China and the Federal Reserve’s hawkish rate cut have also weighed on appetite for emerging markets.

The move has been expected since last year. A State Department announcement in September that the financial restrictions could be implemented in November exacerbated a drop in the ruble. Since then, the publication of Special Counsel Robert Mueller’s report on Russian election interference has removed some of the threat of new sanctions.

“The problem is that we don’t know what these sanctions actually involve,” said Alexey Tverdohleb, a trader at Bank Zenit in Moscow. “The current level of yields doesn’t price in all of the risks.”

The executive order grants Treasury Secretary Steven Mnuchin the authority to prevent international financial institutions from extending loans to Russia, according to Alan Kartashkin, a Managing Partner at the law firm Debevoise & Plimpton in Moscow. The Treasury could also be able to prohibit U.S. banks from making loans or providing credit to the Russian government, but this will be subject to limited exceptions, he said.

“The Secretary of the Treasury can issue a directive or regulations that will clarify which types of loans will be prohibited, which could potentially include all sovereign debt, including Eurobonds and domestic OFZ bonds,” according to Kartashkin. “Market participants will be waiting for official statements from U.S. Treasury on this issue, which I would expect to be promulgated soon.”

The announcement of the new restrictions came just a day after Trump called his Russian counterpart, Vladimir Putin, offering American assistance in fighting wildfires in Siberia. The Kremlin said the call was a signal that “in the future, it will be possible to restore full-format relations between the two countries.” Neither side revealed whether the presidents discussed the sanctions during the call, however.