By
By Steve Matthews
Bloomberg

Retail sales in July rose by the most in four months, data showed on Thursday, suggesting the consumer was holding up ahead of the latest escalation in the U.S.-China trade war. While manufacturing output declined in the month, two regional Fed indexes for August came in higher than expected.

“Prudent risk management would argue for a cut in September because of the downside risks from trade policy and a slowing global economy,” said Ryan Sweet, head of monetary-policy research at Moody’s Analytics Inc. “The incoming data will likely factor into whether or not they go 50 or 25 basis points in September. Right now the data argue for 25.”

Powell may give a hint of his thinking when he speaks on Aug. 23 at the annual central bankers retreat in Jackson Hole, Wyoming. The topic of his remarks is Challenges for Monetary Policy, according to the Fed’s public schedule updated on Thursday.

Investors have fully priced in another quarter point reduction when the Federal Open Market Committee meets on Sept. 17-18, according to pricing in federal funds futures contracts. Last month, the FOMC cut rates for the first time in more than a decade. Powell described the move as a “mid-cycle adjustment” and not the start of a long string of rate reductions. 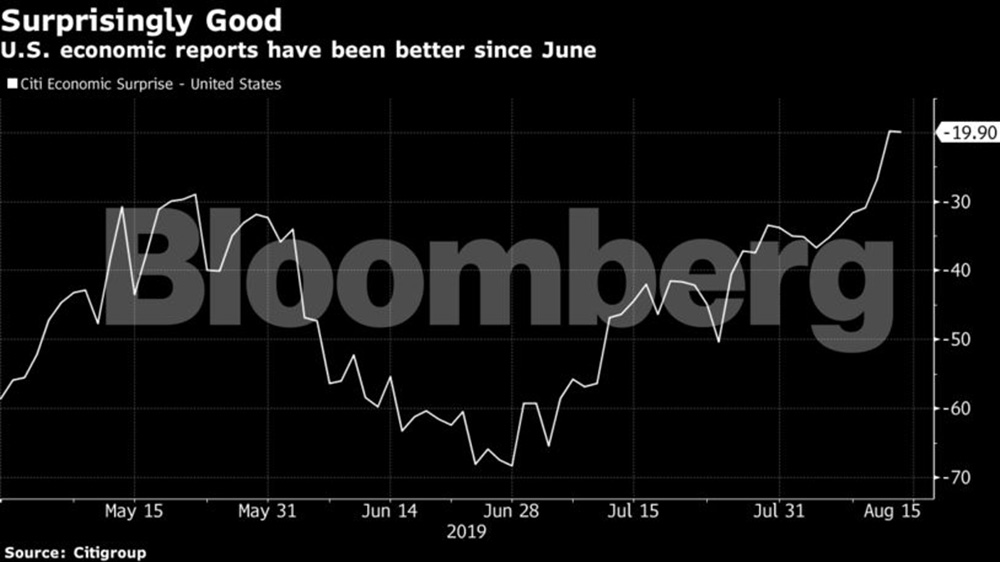 Recession worries were underlined Wednesday when a key portion of the Treasury yield curve inverted — meaning short-term rates were higher than long-term rates — which has previously been an early recession warning. That segment of the curve, between two- and 10-year Treasuries, shifted back to slightly positive on Thursday but remains extremely flat

“The Fed can’t just worry about domestic conditions,” said Ward McCarthy, chief financial economist at Jefferies. “After 30 years of globalization, the Fed can’t go off on its own and has to worry about global conditions. There is reasonable concern about the global economy and the health of financial markets.”

Fed officials have consistently said they don’t see any imminent risk of recession, partly because consumers make up 70% of the U.S. economy and have continued to spend. St. Louis Fed President James Bullard said on Thursday that he was watching the markets and incoming data, but there was no need for an inter-meeting FOMC gathering.

“A couple of weeks one way or another probably doesn’t matter. What matters is that you are in the right zone for interest rates and that you are reacting appropriately to incoming data,” Bullard, a policy voter this year, told Fox Business network in an interview.

What Our Economists Say

“The latest market rout could weigh on the August activity data as well as sentiment in September — all coming out before the September meeting. While economic data remains consistent with a positive outlook, the Fed might find it impossible to resist the market and will have to act as early as September.”

Minneapolis Fed chief Neel Kashkari, who does not vote on the FOMC in 2019, said separately in a radio interview Thursday that he was “leaning towards the camp of yes, we need to give more stimulus to the economy, more support.”

Inflation pressures may also be starting to build after being persistently low. Data released on Tuesday showed the annual gain in the core consumer price index, which excludes food and energy, hit a six-month high in July of 2.2%.

Central bankers gather next week for the Kansas City Fed’s annual policy retreat in Jackson Hole, Wyoming. The discussions are typically based around a series of academic papers presented at the three-day conference, with Powell’s remarks a key highlight. This year’s gathering gives officials a timely chance to discuss the implications of a weakening world economy. 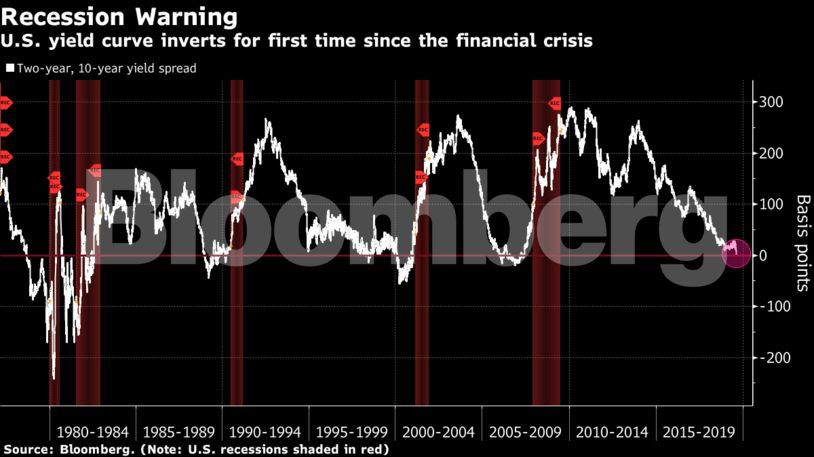 “They have to be thinking about how may a global recession impact the U.S. economy and do lower negative yields elsewhere take our comparable U.S. yields down with it,” said Sam Bullard, senior economist with Wells Fargo Co.

China has reported the weakest growth in industrial output since 2002, while Germany’s economy shrank as exports slumped. An upcoming risk is Brexit as U.K. Prime Minister Boris Johnson has pledged to take Britain out of the European Union on Oct. 31.

Trade battles remain a wild card for the Fed and have contributed to market swings this week. China called additional, looming U.S. tariffs a violation of accords reached by President Donald Trump and his Chinese counterpart Xi Jinping, vowing retaliation. Trump announced the tariffs set for Sept. 1 and Dec. 15.

“Based on what Jay Powell said in July, they’re not necessarily looking at current data as much as expectations for future data,” said Michelle Meyer, head of U.S. economics at Bank of America Corp. “In the past few weeks we’ve definitely seen more risk to the global outlook with a slowdown in global growth and trade concerns.”