Hong Kong’s tumbling equity market may find that its biggest fans are right across the border.

The city’s increasingly violent protests and slowing economy aren’t scaring dip buyers on the mainland. Onshore-based investors have purchased a net $5.1 billion of Hong Kong stocks in the last 20 sessions, the longest run of inflows since February 2018, according to data compiled by Bloomberg. They bought the most in nearly 10 months on Thursday.

Chinese investors are being lured by cheap valuations, with the benchmark Hang Seng Index trading at 1.1 times book value, near the lowest since late 2016. Hong Kong stocks are among the world’s worst performers over the past month, as escalating protests and a weakening yuan dampen the prospects of listed firms. Profits for Hang Seng members are forecast to drop the most since the global financial crisis this year, data compiled by Bloomberg showed.

The gauge rose 0.8% at the close on Thursday.

“This is a prime time to invest in Hong Kong,” said He Qi, a Shanghai-based fund manager with Huatai PineBridge Fund Management Co. “It’s a good opportunity for value investing, and I’m willing to stomach any loss should the market drop further.” 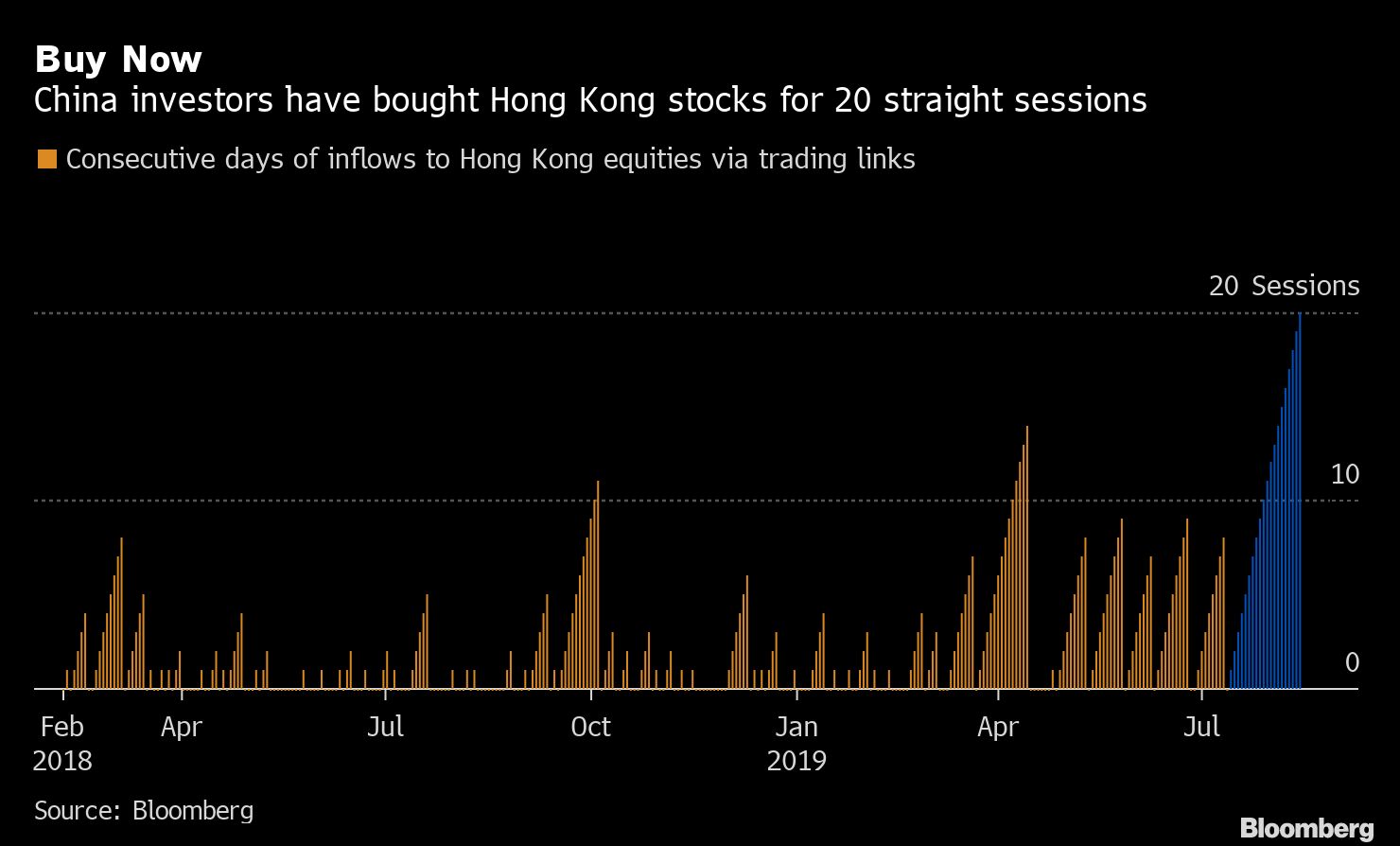 Huatai’s He bought shares of Hong Kong-listed Chinese firms during the city’s recent sell-off, and he is ready to add more should the market fall further. He is betting that earnings for those companies will be immune from the unrest as they sell mainly to China.

Shenzhen Kaifeng Investment Management Co. is “inclined to go long” on Hong Kong stocks because the worst of the city’s unrest is likely over, said Gao Bin, chief economist at the private fund company. Gao said in a written response to Bloomberg that he sees opportunities in Hong Kong property, financial and some cyclical stocks as they have priced in too much pessimism.

The valuation gap between China stocks and their Hong Kong-listed peers has made the offshore market particularly appealing, said Tao Yifei, a fund manager at HFT Investment Management Co. The premium has widened to more than 30%, near the biggest since February last year. Still, Tao said he’d wait a bit longer to do any buying.

“The market may soon bottom out and I see a good buying window after earnings season,” he said. “The results and companies’ guidance should give investors some hints and clear up their doubts.”