Raub, Malaysia – As a child, Kenny Wan Mun Hoe, manager of the Newleaf Plantation, delighted in the flavour of the custard-yellow durian – one of Malaysia’s most popular seasonal fruit his parents brought home each season for the family.

“I loved it,” the 39-year-old Malaysian recalls, his face lighting up at the memory of how they would mix the unctuous flesh with white rice. “The durian was always sweet and kids love sweet stuff.”

Now with people in China discovering a taste for the fruit, known for its thorny shell and overpowering smell, Wan has his own durian farm and ambitions not only to export to mainland China, but to become one of Malaysia‘s top growers. But as the appetite for durians grows there, more trees will be felled to make way for plantations, damaging the environment further.

“We have seen tremendous growth in the industry and we have also seen the farm price of fruit increase over time,” the former banker and financier told Al Jazeera on a visit to the 20-hectare farm he bought four years ago near Raub, a rural town about two hour’s drive northeast of Kuala Lumpur that is renowned for durian.

“We feel this is probably just the beginning.”

Durians have long been one of Malaysians’ most enduring passions.

During its two main seasons, between June and July and again in December, stalls appear along roadsides in cities and towns across the country, attracting crowds of devotees.

On a recent Friday evening, in a Kuala Lumpur suburb, a group of colleagues was feasting on durians under a cavernous white tent where the spiky fruit was piled on trestle tables. Other stallholders peddled durian-flavoured ice cream, cream puffs and Japanese desserts.

Sammy Cheang, 41, gingerly picked up the specimens on display, breathing in the aroma before choosing a Musang King, the most popular and pricey variety.

“The stronger the smell, the better the taste,” she explained, scooping up a segment of the creamy flesh from the fruit on the table in front of her.

Durians only begin to smell once they are ripe. 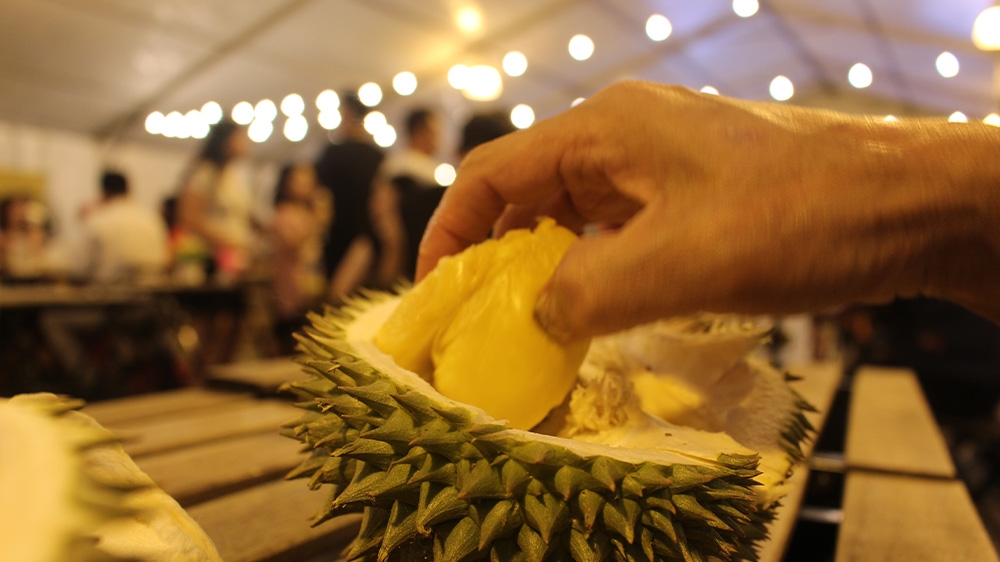 “Actually, eating durians reminds us of family,” added her colleague Pei Qi Loh, 26, explaining Malaysians’ connection with what is known in Southeast Asia as the King of Fruits. “At home my father would go out and buy durian and bring it home for us to eat together; eat together and stink together.”

The four friends, who have put on gloves to eat the fruit, collapse in laughter. On a neighbouring table, an elderly man sucks the last bits of the durian from his fingers, as the empty shells pile up.

Durian trees are native to Southeast Asia and popular throughout the region, even if their powerful smell means they are banned in many hotels and offices and on public transport.

In Malaysia, each variety’s unique flavour reflects the soil and climatic conditions of the place where they are grown. Tasting notes for a durian can read much like those for wine.

Musang King, with its golden pulp and creamy texture, was first discovered near the northeastern town of Gua Musang in the 1980s, is said to offer a perfect balance of sweet and bitter.

Lindsay Gasik, who has written guides to eating durian and leads tours for eager tourists, describes the flesh as similar to cookie dough. Others say its consistency is more like soft cheese. Its popularity means it commands a higher price than other varieties.

“Almost all Southeast Asian countries produce durians,” said Tan Kok Wai, Malaysia’s special envoy to China. “But it is also recognised that the best durians come from Malaysia; the best tasting and the ones with the best flavour.”

Taste of the tropics

In June, Malaysia’s first shipment of whole durians – frozen to preserve them at perfect ripeness – arrived in China, a month after the two countries agreed to export protocols for the fruit.

The Agriculture and Agro-based Ministry recently said that it expects Malaysia to export as much as a million kilogrammes of frozen durian to China every month.

Tan says Musang King will have an edge over the Thai varieties that currently dominate the Chinese market because Malaysian farmers only harvest the fruit once it has ripened and fallen from the tree.

“Not only do the Thai durians not achieve that seductive taste, but the quality is different,” he said. “With Musang King as soon it goes into your mouth you know.”

Durian consumption among people in mainland China, judged on the volume of fresh fruit imported, increased by 13 percent a year between 2006 and 2016, according to Durian Harvests, a plantations company.

At the moment, most durian orchards in Malaysia are family-run businesses.

Every day during the season, farmers drive their trucks to the wholesaler who sets up a collection point by the side of the road.

There, the durians are inspected and weighed. The best, uniformly round and weighing about 1.5kg, are labelled Grade A — suitable for export. The misshapen and smaller ones are graded C and put aside to be made into a paste.

in 2017, 72,000 hectares of land were cultivated with durian trees, according to the Department of Agriculture, although only about half of that was harvested.

“The EU (European Union) is giving us problems (over palm oil) so we are changing our strategy a little,” said Hisham Mahmood, a durian fan and a director at publicly-listed oil palm company PLS Plantations.

“We are going to diversify into durian plantations; the top quality ones.”

PLS, which last year signed a deal with Malaysian plantation giant FGV and three Chinese companies to develop a durian business, will start with 50 durian trees, which take about five years to start bearing fruit. They will be planted on existing land, he said.

But the best land to grow durians are also some of the most crucial areas for the survival of Malaysia’s most endangered species, including the Malayan tiger. So large-scale commercial orchards with the potential to cause the most damage has environmental groups concerned.

Around Gua Musang which is home to Malaysia’s indigenous people, the development of land for durian plantations has already created conflict. The land corridor is also home to the Central Forest Spine, a major conservation initiative.

And disappearing forests also put durians themselves at risk by destroying the habitat of the giant honeybees and bats, including flying foxes, which are necessary for pollination.

“Without bats we can expect that durian fruit production could be potentially greatly reduced, even if the giant honeybees are still around to help do the job,” Sheema Abdul Aziz, co-founder and president of Rimba Research, told Al Jazeera.

“But the honeybees also rely on rainforest as their habitat, so if you clear the forest, then they will disappear too. If both bats and giant honeybees disappear, that could potentially lead to pollination failure for the durian industry.”

With the business still in its infancy, farmers and plantation owners have a chance to learn from past mistakes and adopt sustainable methods from the start.

Environmental groups say good practices include planting on existing agricultural land rather than clearing native forest, planting other crops among the durian trees to avoid creating a monoculture, and reducing the amount of pesticides and herbicides used.

Back at Wan’s farm, looking down over the valley, durian farms dot the landscape amid a patchwork of dense jungle. Some plots are devoid of grass; an indication that some farmers are using herbicides to clear the undergrowth.

Wan plans to extend his plantation by more than 400 hectares over the next three years and open a processing plant so that his company can send durians directly to China.

While he cannot speak for others in the industry, he insists his business will not expand at the expense of the environment.

“Even now as we’re clearing it’s taking place in existing rubber estate,” he said. “We are not clearing the forest. “