Bogota, Colombia – After giving up a bank job and losing the investment he made in a bar two years ago, Pedro Rodriguez was at a low point. He found himself driving around Bogota – and breaking the law.

As a driver, Rodriguez (whose name has been changed to protect his privacy) earns more per month than the average worker in Colombia. In large part, that’s because he uses ride-hailing apps. And several weeks ago, he added Chinese ride-hailing giant DiDi Chuxing to his toolbox.

Using a ride-hailing app to book a car is illegal in Colombia. Each time Rodriguez picks up a customer, he is breaking the law. His licence was suspended for six months after he was caught picking up riders who summoned him using an app. Still, the money is so good that he keeps looking for that next fare.

“I found out that this was a good business,” Rodriguez told Al Jazeera. “At the beginning, Uber had a monopoly and they charged very high rates – both for users and drivers. They should legalise it, but more than legalising it, they should do a regulation for this type of transportation to have minimum characteristics and standards, since many people have entered this business and it has deteriorated.”

DiDi is an unknown giant that has been largely focused on China and its 1.4 billion people. The company claims 550 million riders around the world. Uber, by comparison, has 75 million riders globally and has been in Colombia since 2013. Most of DiDi’s users are in China, where the app is widely used.

Now that DiDi is operating in South America, it is competing for control of Bogota’s streets with Uber, Cabify, Beat and local startup Mi Aguila.

DiDi launched in Bogota on June 4 and plans to kick off in more cities over the next few months as part of a strategy to capture 30 percent of the Colombian market by December. 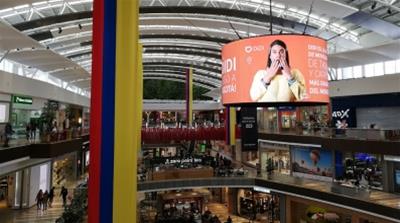 To that end, the company is offering weekly payments of a million Colombian pesos ($311) to drivers who make at least 80 trips, regardless of distance or cost. Over the course of a month, that adds up to about $1,244 – more than five times the minimum monthly wage in Colombia (about 810,000 pesos, or $252).

DiDi drivers must be online and available for a minimum period of time, which guarantees to the company that its drivers are not working for competitors by jumping from one app to another. DiDi charges a low commission for drivers – 10 percent per ride – compared to an industry average of 25 percent.

“The market in Colombia has a lot of potential, as it is an important centre of growth and innovation in the region,” the company told Al Jazeera in an emailed statement. “Bogota is the third largest city in Latin America, with over 80 percent of its population making at least one trip per day.”

Ride-hailing apps are illegal, yet have many supporters among riders, drivers and car owners.

Take Alejandra Rosales (whose name has been changed to protect her privacy). While she is at work as a radio producer in Bogota, the compact Kia Picanto that she and her brother co-own is loaned to a driver who rolls through the streets in their vehicle, finding customers via an app called Beat.

Rosales financed her car and must make monthly payments. Her vehicle cost about $10,000, and was partly bought with a loan of $7,600. Paying that money back – along with insurance premiums – costs her $262 per month. The Beat driver pays Rosales roughly $304 a month to use the car from Monday to Saturday. She pockets $42 of that money – and plans to pay off the car loan by 2023 and buy a bigger, better car.

Drivers who use apps and private cars face fewer restrictions on the road than taxi drivers do. To ease traffic and improve environmental conditions, cars in Colombia’s largest cities are restricted to travelling a certain number of hours per week based on the date and the last digit of the licence plate. Taxis, for their part, face full-day restrictions twice a week.

Private cars have fewer restrictions and do not require expensive taxi medallions that cost upwards of $27,000. Many taxi drivers and taxi owners have shifted to private cars operating on transport apps. The difference between these two systems of regulation has led to tensions between taxi drivers and app drivers. When Uber launched, its drivers were often ambushed, chased and even beaten by gangs of taxi drivers. But things have started to change.

“Some taxi owners have changed one taxi and its medallion for up to three private cars, to work with the apps,” Rodriguez said. “They rent the cars for about 300,000 Colombian pesos ($93) a week.”

On July 10, 2019 some of the 50,000 taxi drivers who are registered in Bogota are expected to gather in five locations around the city to get the attention of government watchdogs. The taxi drivers claim that ride-hailing apps like DiDi are a threat to their guild, and are advocating for government intervention.

App drivers also have to contend with another threat: the police.

In Colombia, law-enforcement officers are asking for rides – and busting the drivers. Sometimes, they look for the type of low-end vehicles that are often used by app drivers, and scrutinise the drivers’ mobile phones. Drivers can get tickets and can have their cars towed and their licences suspended or revoked.

“I was caught at the airport using Uber,” he said, noting that he could lose his licence permanently if he gets caught again.

Even so, Rodriguez says the rewards of working with the apps are worth the risk, although he does not go to the airport or bus terminal any longer.

Gabriel Santos, a congressional representative from the government’s Centro Democratico party, is pushing to legalise this type of transport.

“We are proposing initiatives that allow the coexistence of new tech developments related to the passengers’ transportation, which does not necessarily detract from a transport sector, but that does benefit users, enabling access to more choices and more competition in the market,” Santos told Al Jazeera.

Santos is looking at models like the one in Australia, where some rides – such as those leaving airports – are out of bounds for ride-hailing apps and reserved for medallion-bearing taxis.