As the U.S. looks to enforce sanctions aimed at halting trade with states such as Iran and Venezuela, there’s increased scrutiny on the tricks being used to keep commodities flowing to and from blacklisted countries.

Ships vanishing from tracking screens, clandestine transfers on the high seas and fake destinations are among some of the tactics used to hide the business from authorities, according to analysts who track flows around the world. These maneuvers have helped Iran continue with about 300,000 barrels a day of oil exports in June, half of which went to China, according to Bloomberg Intelligence.

Here’s a description of how some of those tricks work.

A common method to transport Iranian oil or North Korean coal with stealth is to turn off the Automatic Identification System, an electronic device that pinpoints a ship’s location. Known as going dark, a vessel flicks the switch before berthing and typically reappears days later, masking the location of its load or discharge port. Ships can sometimes still be tracked by satellites, but even that is limited by scope and weather.

“With the world’s oceans so vast, satellite imagery can only look in so many places at once, despite the technological advances in recent years,” said Tom Kenison, an analyst at industry consultant FGE. It’s also weather dependent as heavy cloud cover can obscure the view, he said. 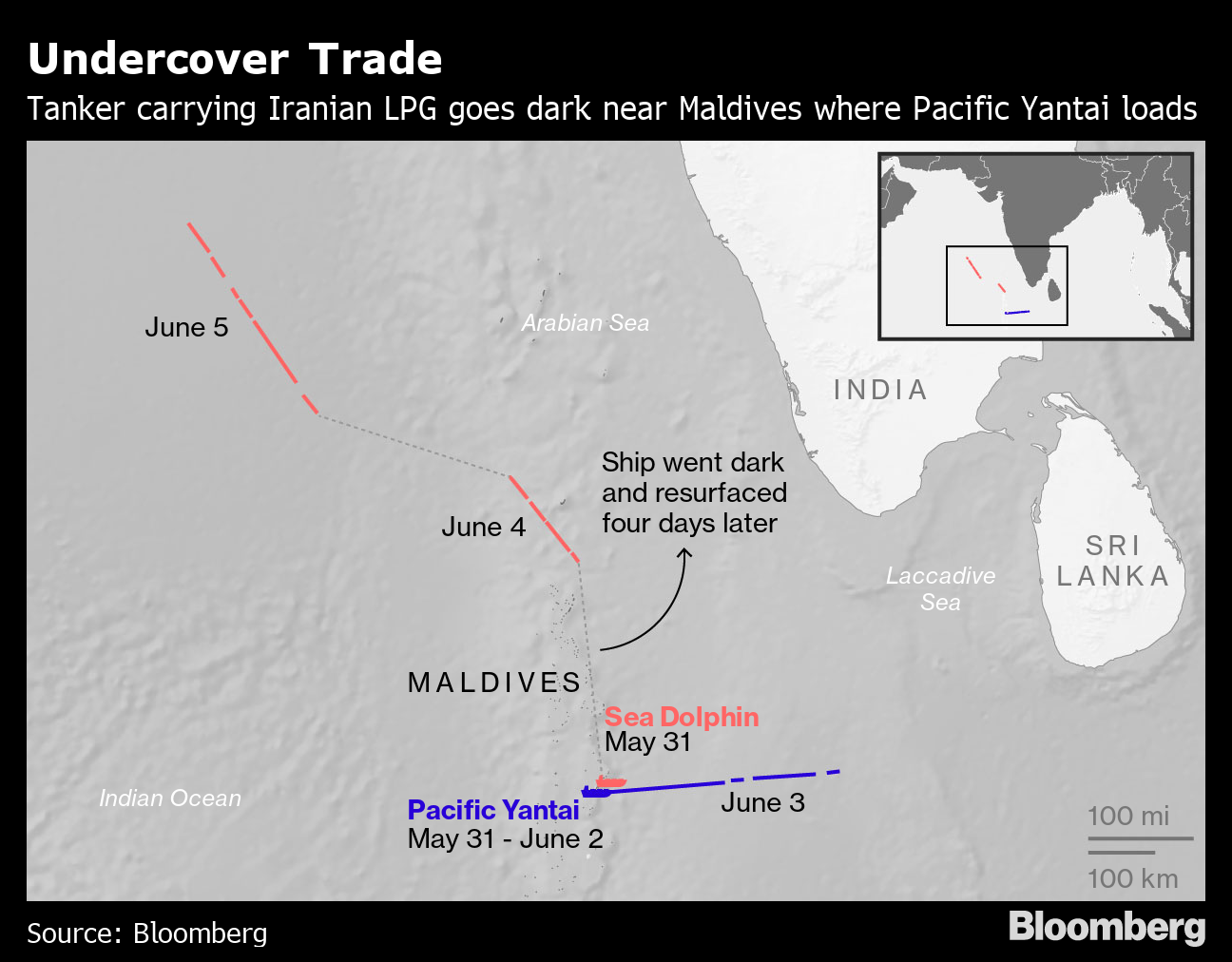 A method that often goes hand-in-hand with going dark. A first vessel will take its clandestine cargo away from the country in question before transferring it to a waiting ship, all of this happening out of sight. The vessels will then sail in different directions. For about a third of Iranian exports of crude and oil products, more than one tanker typically handles a load before it’s delivered to its final destination, said Ilya Niklyaev, an analyst at data intelligence firm Kpler SAS.

Common locations for transfers are the Sharjah and Khor Fakkan anchorages off the United Arab Emirates, the Malacca Strait and Nipah anchorage off Indonesia and areas off Sri Lanka and the Maldives, according to Kpler and FGE. Tankers are also trying to be more discreet and are increasingly conducting transfers away from designated anchorages, FGE’s Kenison said.

Signaling the wrong destination to load or unload is another technique. Ships that intend to take cargoes from Iran may indicate their loading ports in sanction-free Qatar, Saudi Arabia or Iraq, while those vessels on their way to North Korea may show a port in north-east China as their landing point. Ships can keep changing their destinations and end up not berthing at any of them.

Iranian barrels can also be rebranded as oil from a nation free from sanctions such as Iraq, according to FGE’s Kenison. The countries share fields along their border and the crude has similar characteristics. Oil from these deposits can be trucked out of the Persian Gulf state to another port and documents forged to hide Iran as the origin, he said. Still, there is a level of risk. Tests are typically carried out on the crude at the landing port and if the parameters don’t meet the contract specifications, the cargo can be rejected.

Some shipments are still OK

While this might not be a premeditated strategy aimed at skirting sanctions, some companies may continue to receive oil from sanctioned nations as a repayment for earlier investments in fields or other infrastructure. In China, for example, refiners are expected to continue lifting 250,000 barrels a day of Iranian oil for this reason, according to FGE estimates. China National Petroleum Corp., known as Sinopec, has invested in projects in Iran and Venezuela, another country under U.S. sanctions.