The pound sterling has strengthened after two days of losses, hitting a three-week high compared with the euro.

But options markets on Wednesday still signalled pain ahead, betting on greater risk of a no-deal Brexit under Boris Johnson – the new leader of the United Kingdom – as economic stress worsens.

Johnson took office as prime minister vowing to implement the result of the 2016 Brexit referendum and lead Britain out of the European Union on October 31 with “no ifs or buts”.

That strategy could pitch the country into a showdown with the EU and trigger a constitutional crisis at home, as many UK lawmakers have pledged to bring down any government that tries to force such a departure from the European bloc.

UK economic data has also been dismal in recent months, with a recession seen as likely.

However, the pound strengthened as much as half a percent on Wednesday against the dollar and rose compared with the euro, as traders cut some extreme short bets against the British currency.

Jordan Rochester, a strategist at Nomura Securities, said the pound’s move was a classic “buy the rumour and sell the fact” price action, with investors trimming some of their net short positions in sterling expected to be around $6bn.

Claire Dissaux, head of global economics and strategy at Millennium Global Investments, said Johnson would likely end up with a hard Brexit through a “Canada-plus” type of trade agreement, which could nonetheless be negative for the economy and the pound.

“Even with the prospect of some fiscal stimulus which has been promised by Johnson, you do have a big cyclical downturn which is [becoming] structural,” Dissaux said, noting declining investment and signs of economic contraction.

“Plus you have the Bank of England, which is turning dovish.” 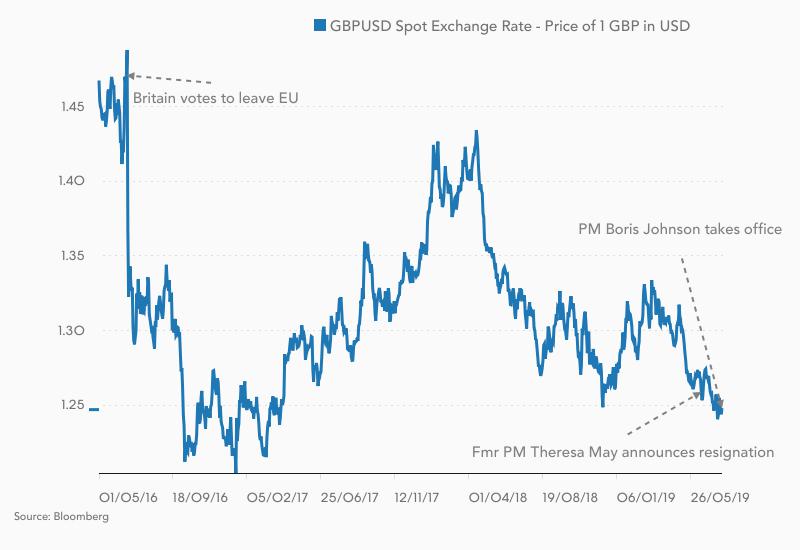 ‘A softer pound’ or ‘a slow grind upwards’?

Sterling stands less than half a percent off the 27-month low it hit recently against the dollar. It jumped 0.5 percent and landed around $1.25. Against the euro, it also rose 0.5 percent – as the euro weakened to three-week low.

In the currency derivative markets, volatility gauges remain elevated, with three- and six-month implied volatility at their highest since April.

Investors are also increasing their bias for sterling puts over calls in the three- and six-month sterling-dollar risk-reversals market, with the three-month bias the greatest since April. Puts confer the right to sell at a pre-agreed price, while calls allow a holder to buy.

ING analysts said Johnson faces a battle with a divided parliament over the no-deal scenario.

“A general election is increasingly likely – maybe even inevitable. This suggests a softer pound, meaning that any sterling strength should be faded in our view,” ING analysts told clients, predicting the currency would approach 0.95 pence per euro and fall below $1.20 to the dollar.

However, the risk of a no-deal Brexit is still considered to be below 50 percent, and options traders do not seem to be fully pricing in a no-deal scenario, with implied volatility well below the levels they had reached prior the original March 31 Brexit deadline.

Many reckon sterling moves will be contained until there is greater clarity on Brexit, given that the currency has fallen over six percent since May compared to the dollar and given that the UK parliament starts its summer recess on Thursday.

“Regardless of politics, sterling has been reliably mean-reverting over the past 50 years,” says Kamal, “and it’s very cheap … whether in terms of purchasing power or in real terms.”

Trade-weighted sterling is near its lowest level since 2017.