Osaka, Japan – As this year’s G20 summit closed on Saturday, United States President Donald Trump agreed to hold off on an escalation in his trade dispute with China and to resume bilateral talks, potentially giving the world economy a reprieve.

But there was no agreement to comprehensively roll back the punitive tariffs that the two sides have imposed on one another’s goods, or for China to make the deep structural changes to its economy that Trump is demanding.

The summit in Osaka, Japan, may also come to be remembered as the one in which the G20 became the G19-plus-one, with the US as the lone voice against measures to tackle climate change.

After a bilateral meeting with Chinese President Xi Jinping, Trump indicated that all current levies, including the 25 percent import tariffs he slapped on $200bn worth of Chinese goods in May, would remain in place – but the two leaders agreed that they would not intensify the conflict.

An additional $325bn of goods, covering nearly all the remaining Chinese imports into the US, including consumer products such as mobile phones, computers and clothing, would not face punitive tariffs for the time being, Trump said, holding off on recent threats to impose them.

“We will be continuing to negotiate,” Trump said at a news conference after the summit ended. “We’re going to work with China on where we left off to see if we can make a deal.”

The meeting between Trump and Xi, the leaders of the world’s number one and number two economies respectively, was the most closely watched event at the summit.

Before reporters were ushered out of the room, Xi reminded Trump of the 40-year history of formal US-China relations.

Brendon O’Connor, associate professor in American Politics at the University of Sydney, told Al Jazeera: “Talks are better than threats and $300bn extra tariffs put on Chinese goods wouldn’t have been good for the United States … China … and the world economy. It is progress, but there’s much ahead.”

‘Tens of billions of dollars’

Without providing details, Trump indicated that an agreement was reached by which the Chinese government would buy “tens of billions of dollars” in agricultural goods from US farmers.

This appeared to be aimed at appeasing US farmers, a section of society that voted heavily in Trump’s favour in the 2016 presidential election, and who could prove to be pivotal in next year’s race.

Beijing’s retaliatory tariffs against Washington last year specifically targeted US farmers, a measure which many analysts believed was an attempt to pressure the US president personally.

Trump suggested in his press conference that US farmers might end up being the major beneficiaries of his negotiations with Xi.

There was also a bilateral agreement on the Chinese technology firm Huawei in which Trump agreed that US companies could continue to sell their components to the firm – though the ban on US entities to buy Huawei products remains in place.

Trump noted several times that the concrete resolution on Huawei would be “saved to the very end” of negotiations on a US-China settlement.

The US considers Huawei a national security threat, and Trump has repeatedly accused China of stealing trade secrets and protecting its own companies from overseas competition.

“The US is on the defensive trying to protect its lead in [information technology], Glen Fukushima, senior fellow at the Center for American Progress, told Al Jazeera.

“[It’s] trying to persuade its allies, with only limited success, to reject Huawei and other Chinese companies that the Trump administration deems a threat, not only to US industrial competitiveness, but to US national security.

“Hence, the Chinese desire to maintain and promote an open environment for its business and technology, whereas the US is trying to contain Chinese expansion and emphasising the importance of the ‘resilience and security’ of its networks.”

‘Avoiding worst is not enough’

Meanwhile, the lack of agreement on more fundamental issues, such as reforming the global trading system so that it is more equitable, and climate change, was a disappointment to many participants at the summit. Those two issues proved to be the most divisive between Trump and the other leaders.

French President Emmanuel Macron put it most directly: “We have avoided the worst during this G20. But avoiding the worst is not enough. We need to build fruitful agreements and succeed in building stability.”

Most leaders view the World Trade Organization as an institution that needs to be strengthened and modernised to provide stability to the global trading system. But Trump denounced it as being part of a “bad deal” for the US in which “we lost tremendous amounts of money”.

Similarly, climate change was another issue where the US was isolated. The official communique, largely filled with vague declarations of mutual accord, was remarkable when it came to its passage about the 2015 Paris Agreement, the landmark deal in which nations around the world committed themselves to lowering their carbon emissions. Trump announced his intention to pull the US out of the agreement in 2017.

In one paragraph of the G20 declaration, unofficially representing the position of all members but the US, the document read: “Signatories to the Paris Agreement who confirmed at [the 2018 G20 Summit in] Buenos Aires its irreversibility and are determined to implement it, reaffirm their commitment to its full implementation, reflecting common but differentiated responsibilities and respective capabilities, in the light of different national circumstances.”

But the following paragraph said: “The United States reiterates its decision to withdraw from the Paris Agreement because it disadvantages American workers and taxpayers.”

Over these two paragraphs, the document shifted from being a consolidated G20 communique into a US document in which the Trump administration attempted to justify its unilateral stance on climate issues.

Macron tweeted in response: “In Osaka, we committed all G20 members, with the exception of the United States, to the implementation and irreversibility of the Paris Agreement. We will continue to make progress on the critical issue of climate.”

Meanwhile, Trump made a surprising reversal of course on the issue of US-Turkey relations, which have been strained by Turkey’s purchase of Russian made S-400 defence missiles, due to be delivered next month. Trump put most of the blame for the confrontation on the administration of former President Barack Obama, whom he portrayed as having painted Turkish President Recep Tayyip Erdogan into a corner through its refusal to sell Turkey the US-made Patriot missiles.

Trump called the whole issue “a mess” which is “not really Erdogan’s fault”. Indeed, Trump spoke at length in defence of Erdogan’s position and described the matter as “complicated”.

“We’re looking at different solutions. It’s a problem, there’s no question about it,” Trump said.

When it came to difficult questions by reporters about the suspected involvement of Saudi Crown Prince Mohammed bin Salman (MBS) – a key US ally in the tense Gulf region – in the murder of Saudi journalist Jamal Khashoggi in Istanbul last year, Trump mostly ignored the issue.

While admitting that the murder was “horrible”, he accepted MBS’s assurances that an appropriate investigation and prosecutions were under way.

A United Nations investigator has called for deeper scrutiny of the role of MBS in the matter.

Trump highlighted the importance of Saudi Arabia’s oil policies in stabilising global markets and praised the government for “doing a great job on women”. 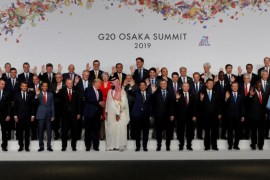 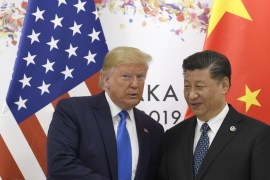 G20 summit: China, US pause trade war with talks ‘back on track’

Trump says while he will not lift existing import tariffs, he will refrain from slapping new levies on Chinese goods. 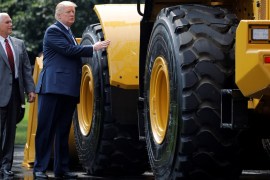