This week’s jump in Bitcoin prices revived themes well known to the digital currency that inflated then burst less than two years ago. Among them: enormous volatility, and exchange overloads.

Bitcoin soared as much as 39% this week to $13,852, the highest since January 2018. But it hit a brick wall around 4:30 p.m. New York time Thursday, plunging more than $1,800 within about 10 minutes. Moments later, prominent cryptocurrency exchange Coinbase reported a system outage, which was resolved after an hour. Swings continued Thursday, with the coin anywhere from down 7.3% to up 4.8%.

It was down 6.5% at $11,909 as of 6:24 p.m. in Hong Kong Thursday. Volatility in Bitcoin is near the highest levels since early 2018, when the bubble was bursting. Analysts said this was likely a sign of things to come.

“A 20%-30% pullback would not be surprising and very consistent with Bitcoin’s recent bull-market pullbacks,” Robert Sluymer, technical strategist at Fundstrat Global Advisors, wrote in a research note.

The most widely traded digital currency has rebounded after a slump lasting more than a year as major multinational corporations announce new projects in the industry. Facebook Inc. unveiled plans for a so-called stablecoin called Libra to launch next year. PricewaterhouseCoopers LLP said on Wednesday it had added cryptocurrency auditing to its services. And JPMorgan Chase & Co. said it is seeing interest from clients in a prototype digital coin to speed up trading of securities such as bonds. 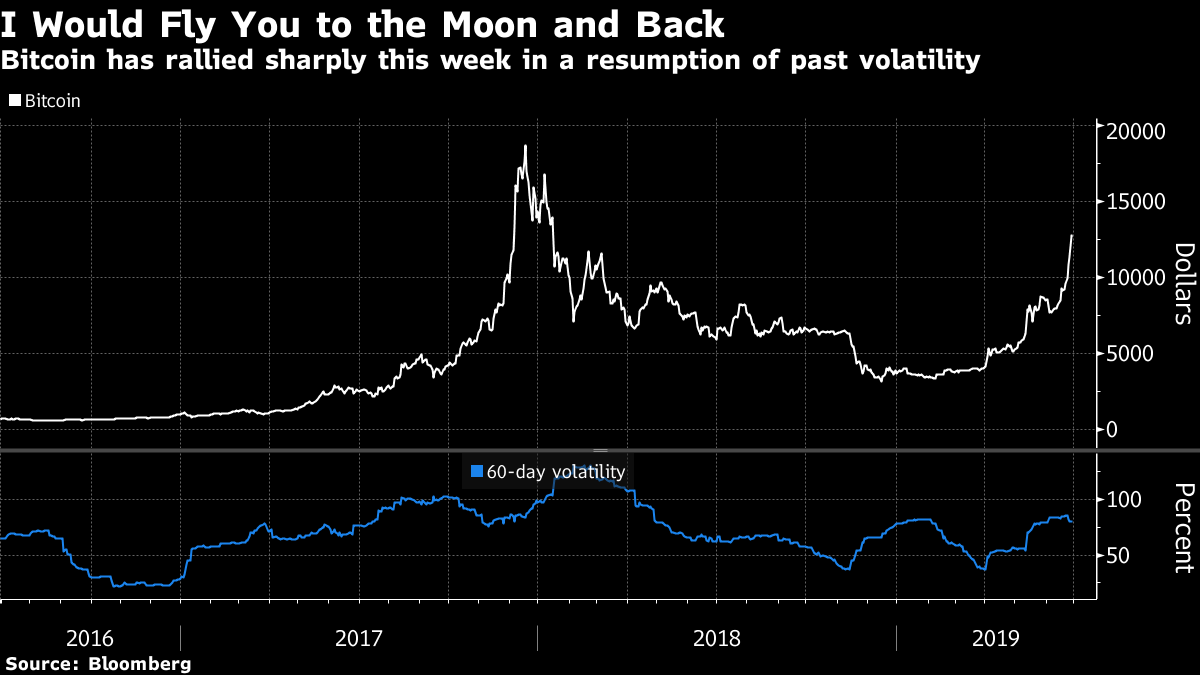 Equities are getting in on the act, as well. Some stocks that had been popular proxy bets on the Bitcoin boom in 2017 rallied again this week, with Nvidia Corp, a maker of the graphics processing units popular among miners, advancing 4.9% since the start of the week. Riot Blockchain Inc, which changed its name to capitalize on the interest in distributed ledger technologies, rose 38% during the same period. Some cryptocurrency-linked stocks in Asian markets also made gains.

Richard Ross, head of technical analysis at Evercore ISI, said if Bitcoin could break through its current resistance level at $14,100, its next resistance is around $17,400. He attributed the recent gains to dovish signals from global central banks.

“The ‘problem’ with Bitcoin is not Bitcoin itself, but rather the backdrop which has given rise to this incendiary second act” – more monetary easing and bonds with negative yields, he said.