US President Donald Trump signed an order on Monday that targets Iran’s supreme leader and associates with additional financial sanctions.

Trump said the action follows a series of aggressions by Iran, including last week’s downing of an unmanned US surveillance drone.

Tensions between the United States and Iran that have grown since May, when Washington ordered all countries to halt imports of Iranian oil.

The targets of the new sanctions include senior military figures in Iran, blocking their access to any financial assets under US jurisdiction. They also work to deny Supreme Leader Ayatollah Ali Khamenei’s and his close aides’ access to money and support.

Trump said the supreme leader and his associates were ultimately responsible for what the US president called “the hostile conduct of the regime”.

The Al Jazeera correspondent said the announcement that Iranian Foreign Minister Mohammad Javad Zarif would be sanctioned by the end of this week has come as a surprise here in Iran.

Responding to the sanctions announcement, Iranian Foreign Minister Zarif tweeted that hawkish politicians close to Trump were thirsty for war rather than diplomacy.

“@realDonaldTrump is 100% right that the US military has no business in the Persian Gulf. Removal of its forces is fully in line with interests of US and the world. But it’s now clear that the #B_Team is not concerned with US interests – they despise diplomacy, and thirst for war,” he tweeted.

Zarif has in the past said that a so-called “B-team” including Trump’s national security adviser, John Bolton – an ardent Iran hawk, and conservative Israeli Prime Minister Benjamin Netanyahu could goad Trump into a conflict with Tehran.

Iran’s ambassador to the United Nations said the latest US sanctions against Iran showed that Washington did not respect international law.

Ambassador Majid Takht Ravanchi said Monday that conditions were not ripe for a dialogue with the new US sanctions.

The US decision to impose more sanctions is another indication that the United States “has no respect for international law and order,” Ravanchi told reporters at the UN.

Iran said earlier on Monday US cyberattacks on its military had failed, as Washington sought to rally support in the Middle East and Europe for a hardline stance that has brought it to the verge of conflict with its longtime foe.

Washington has blamed Tehran for attacks on tankers in the Gulf in recent weeks, which Iran denies. On Monday, the US said it was building a coalition with allies to protect Gulf shipping lanes.

A coalition of nations would provide both material and financial contributions to the programme, a senior US State Department official said, without identifying the countries.

“It’s about proactive deterrence, because the Iranians just want to go out and do what they want to do and say hey we didn’t do it. We know what they’ve done,” the official told reporters, adding that the deterrents would include cameras, binoculars and ships.

The US accuses Iran of encouraging allies in Yemen to attack Saudi targets.

In a joint statement on Monday, the US, Saudi Arabia, the UAE and Britain expressed concern over Middle East tensions and the dangers posed by Iranian “destabilising activity” to peace and security in Yemen and the region.

The confrontation between Iran and the US heated up last Thursday when Iran shot down a US military drone, saying it had flown over its airspace.

Washington, which said the drone was in international skies, appeared to come close to attacking Iranian military targets, with Trump saying that he aborted a retaliatory air attack 10 minutes before it was to go ahead.

Trump said he decided the attack could have possibly killed too many people.

US media have reported that Washington launched cyberattacks last week even as Trump called off his air raid. The Washington Post said on Saturday that the cyberstrikes, which had been planned previously, had disabled Iranian rocket launch systems. US officials have declined to comment.

Iran dismissed the cyberattacks as a failure.

“They try hard, but have not carried out a successful attack,” Mohammad Javad Azari Jahromi, Iran’s minister for information and communications technology, said on Twitter.

“Media asked if the claimed cyberattacks against Iran are true,” he said. “Last year we neutralised 33 million attacks with the [national] firewall.”

US allies have been calling for steps to defuse the crisis, saying they fear a small mistake by either side could trigger war.

“We are very concerned. We don’t think either side wants a war, but we are very concerned that we could get into an accidental war and we are doing everything we can to ratchet things down,” British Foreign Secretary Jeremy Hunt said.

US Secretary of State Mike Pompeo jetted to the Middle East to discuss Iran with the leaders of Saudi Arabia and the United Arab Emirates. Pompeo met King Salman as well as the king’s son, de facto ruler Crown Prince Mohammed bin Salman.

The US special representative for Iran, Brian Hook, visited Oman and was headed to Europe to explain US policy to allies. He told European reporters on a phone call before his arrival that Trump was willing to sit down with Iran, but that Iran must do a deal before sanctions could be lifted.

US-Iran relations have deteriorated over the past year since the US abandoned a 2015 agreement between Iran and world powers designed to curb Iran’s nuclear programme in return for the lifting of sanctions.

US allies in Europe and Asia view Trump’s decision to abandon the nuclear deal as a mistake.

France, Britain and Germany have sent an official diplomatic warning to Iran if Tehran reduces its compliance with the accord, two European diplomats said on Monday.

It was not immediately clear what consequences Iran might face for non-compliance.

Washington argues that the agreement known as the JCPOA, negotiated under Trump’s predecessor, President Barack Obama, did not go far enough, and new sanctions are needed to force Iran back to the table to make more concessions.

Both sides have suggested they are willing to hold talks while demanding the other side move first. In the latest comment from Tehran, an adviser to Iranian President Hassan Rouhani repeated a long-standing demand that Washington lift sanctions before any talks.

But the adviser, Hesameddin Ashena, also tweeted a rare suggestion that Iran could be willing to discuss new concessions, if Washington were willing to put new incentives on the table that go beyond those in the deal. 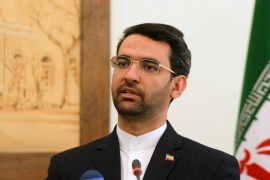 Iran denies being hit by US cyberattack

No successful attack has been carried out, although US is making an effort, Iran’s telecommunications minister says. 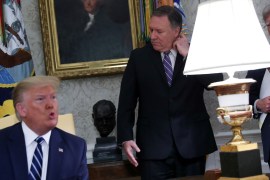 The US president hints he may seek a deal with Iran as he deploys two top envoys to the Middle East to defuse tensions.