Despite providing the equivalent of 17 million trips around the world daily, the biggest ride-sharing platform on the planet is still losing money.

Shares of Uber Technologies Inc, the parent company of Uber, remained mostly flat after markets in New York City closed on Thursday. The ride-sharing giant – based in San Francisco in the United States – announced net losses of more than $1bn in its first earnings report since becoming a publicly traded company.

Wall Street analysts said they were not surprised by the billion-dollar loss because the company had shown disappointing numbers since it debuted on the New York Stock Exchange this month.

Uber has been a publicly traded company for roughly three weeks. So far, its performance has not impressed investors, with its stock continuing to trade below its initial public offering (IPO) price of $45.

But some on Wall Street remain bullish on the company and its long-term prospects.

On the bright side

Despite the massive losses, the company reported a big jump in total trips taken. Worldwide, 1.55 billion trips were booked on the Uber platform in the first quarter of 2019 – a 36 percent increase from the same period in 2018.

“We liked what we saw from Uber’s commentary on its first-quarter call,” said Ygal Arounian, an equity analyst who is also with Wedbush Securities.

“We were looking for improvements accelerating revenue growth, and better profitability over the course of the year, and we got that from management. We’re still a while away from profitability, but Uber is expecting strong signs of improvement across many of its key metrics and that is an important sign for investors.”

Since going public, Uber has not only seen its stock trading below its IPO price, but the company has also been hit with worker strikes.

Ahead of the ride-sharing giant’s public debut on May 10, thousands of drivers shut down their Uber apps for a two-hour early-morning work stoppage across major cities including New York, Chicago and Los Angeles. Organised by driver communities and unions, the work stoppage was designed to protest against Uber’s policies. Drivers demanded job security and livable incomes. 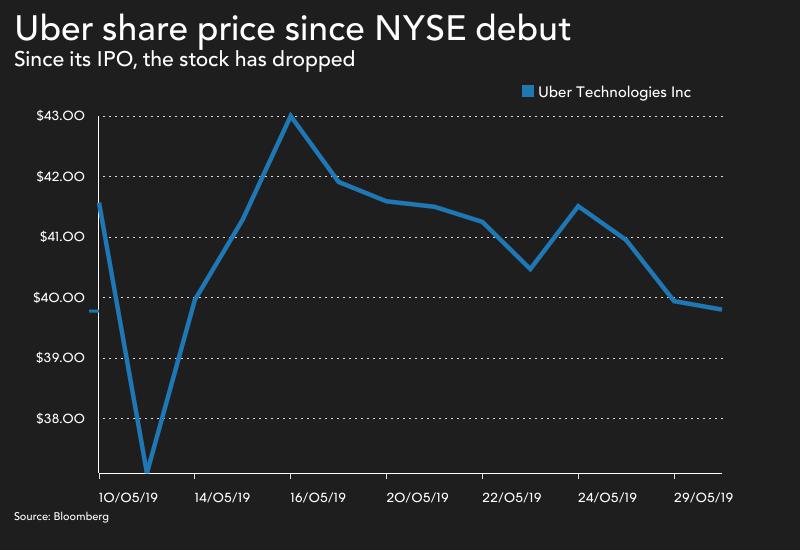 But the company pushed back, saying it was working to improve conditions for its driving workforce.

“Whether it’s more consistent earnings, stronger insurance protections or fully-funded four-year degrees for drivers or their families, we’ll continue working to improve the experience for and with drivers,” the company said in a statement released to the media this month.

The ride-sharing industry has become one of the most transformational growth sectors of the consumer market over the past few years. Despite some bad publicity, Ives said, Uber has established itself as the clear number-one player in the ride-sharing world, and has the cache to support this.

“The brand loyalty of Uber is hard to dispute as the company continues to attract drivers and consumers illustrating an impressive formula to go after a $5.7 trillion opportunity globally,” Ives said.

Ives added that food delivery, freight and logistics – two areas where Uber is branching out – showed the company’s ability to “morph its unrivaled ride-sharing platform into a broader consumer engine”.