President Donald Trump has said the United States is not looking for “regime change” in Iran. He said this on Monday after bilateral talks with Japan’s Prime Minister Shinzo Abe, who has offered to broker a dialogue between the two nations.

“We’re not looking for regime change, we’re looking for no nuclear weapons,” Trump said at a joint press conference in Tokyo on Monday, adding that he believed “we’ll make a deal” with Iran.

Tensions between Washington and Tehran have risen with the US deploying troops to the region, but Trump sought to downplay concerns about military conflict.

With Abe at his side, Trump told reporters at Akasaka Palace that “nobody wants to see terrible things happen”.

Emperor Naruhito and Empress Masako greeted Trump at the Imperial Palace in the Japanese capital as part of a formal welcome ceremony that was broadcast live on national television.

Emperor Naruhito ascended to the throne on May 1, opening what is called the era of “Reiwa” or “beautiful harmony”.

Trump and Abe spent the weekend playing golf, eating out and watching sumo.

“There’s a sense that this is another sign of the good relations between these two countries, but in particular a sign of the relationship between Trump and Abe,” Al Jazeera’s Wayne Hay, reporting from Tokyo, said.

“There’s a sense that they could have given this meeting to anyone, but they didn’t. They gave it to the US, they gave it to Trump.”

At a joint press conference following talks between the two leaders, both Abe and Trump were eager to emphasise the strength of the alliance between the US and Japan despite policy disagreements over trade and North Korea.

Trump described the relationship between the two countries as a “cornerstone” of stability and prosperity not only in the region, but across the world.

“This is a strong alliance indeed,” he said. “The US-Japan alliance is steadfast and iron-clad. We want peace and we want stability.”

Trump repeated that he was not worried about a recent missile launch by North Korea. He said that North Korea’s leader Kim Jong Un wants to “create a nation that has great strength economically” and recognised that such a goal was incompatible with nuclear testing.

Abe told the media that he and Trump spent a “good amount” of time better aligning their policies on North Korea.

“We are completely on the same page,” he said, adding later that Trump had “cracked open the shell of distrust” with Kim.

Abe added that he was eager to meet Kim and resolve the issue of abduction of Japanese citizens by North Korea decades ago and that Trump, who met the families of some of those abducted, was strongly supportive of the initiative.

Trade was also a key issue at the talks.

Trump has threatened high tariffs for Japanese carmakers as part of an effort to reduce trade surpluses with other countries.

Washington believes surpluses are a sign that the US has been mistreated on trade – a theme Trump picked up on after landing in Tokyo on Saturday, vowing to make the relationship between the world’s largest and third-largest economies what he described as “a little bit more fair”.

Negotiations are taking place on a bilateral trade agreement but Trump has said he does not expect major progress on it until July, when Abe faces an election for parliament’s upper house.

Trump has spearheaded an expensive trade war with China, a dispute that has hurt markets worldwide and confounded US allies, including Japan and the European Union.

Washington’s allies, although they share US concerns about Chinese practices, disagree with Trump’s tactics of threatening tariffs on their products rather than seeking cooperation in standing up to Beijing.

Trump reiterated that Japan and the US were working to improve their economic relationship based on “principles of fairness and reciprocity”.

Abe stressed that Japanese companies had invested some $24bn in the US since Trump had taken office.

“Trade-wise, I think we’ll be announcing some things, probably in August, that will be very good for both countries,” Trump said on Monday. “We’ll get the balance of trade, I think, straightened out rapidly.”

Later on Monday, the US president and his wife, Melania Trump, will sit down to a lavish state dinner with the emperor and the empress.

Trump is in Japan on a four-day state visit. He and Abe will visit US troops at a base in the country on Tuesday. Japan had agreed to buy 105 F-35 stealth fighters, Trump told the news conference. 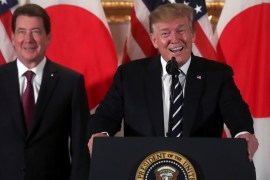 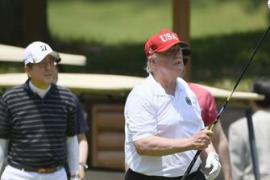 Abe’s strategy is to keep Japan out of Trump’s crosshairs as US threatens new tariffs on import of autos and auto parts. 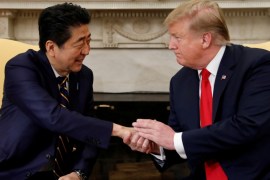