Iran will continue to find international buyers for its oil and use the Strait of Hormuz to transport it, the country’s foreign minister said, warning that if the United States tries to stop Tehran it should “be prepared for the consequences”.

Zarif also said it was in the Islamic Republic’s “vital national security interest” to keep the Gulf and Strait of Hormuz open.

The Strait of Hormuz is a major oil shipment channel in the Gulf.

Zarif’s comments at an Asia Society event came after Washington on Monday announced it was ending waivers that have allowed some of Iran’s largest oil customers to import fuel from the Islamic Republic in limited volumes without facing financial penalties from the US.

The move means buyers must stop purchases by May or face sanctions, the White House said. It is aimed at bringing “Iran’s oil exports to zero” to deny Tehran “its principal source of revenue”.

The White House said the US, Saudi Arabia and the United Arab Emirates were working to “ensure that supplies are made available to replace all Iranian oil removed from the market”.

Following the announcement, oil prices hit their highest level since November, on Tuesday.

Washington reimposed oil sanctions on Iran in November of last year, six months after Trump withdrew the US from the landmark 2015 Iran nuclear deal, which had given the Islamic Republic sanctions relief in exchange for curbs on its nuclear programme.

Eight countries – China, India, South Korea, Japan, Taiwan, Turkey, Italy and Greece – were given a six-month reprieve from the measures.

Turkey slammed the US move to withdraw the waivers, with Foreign Minister Mevlut Cavusoglu saying it would “harm Iranian people”.

The #US decision to end sanctions waivers on #Iran oil imports will not serve regional peace and stability, yet will harm Iranian people. #Turkey rejects unilateral sanctions and impositions on how to conduct relations with neighbors. @StateDept @SecPompeo

Iran, meanwhile, denounced the oil sanctions as “illegal” and accused the US of committing “economic terrorism”.

Supreme Leader Ayatollah Ali Khamenei said on Wednesday that “Iranians won’t give in” despite Washington’s attempts to ratchet up pressure on Tehran.

“They wishfully think they have blocked Iran oil sales, but our vigorous nation and vigilant officials, if they work hard, will open many blockades,” Khamenei said in a speech, excerpts of which were broadcast on state television.

The White House decision marked an unprecedented step by the US against an entire institution of a foreign government.

Trump said the move “underscores the fact that Iran’s actions are fundamentally different from those of other governments” and vowed to continue increasing financial pressure on Tehran until “it abandons its malign and outlaw behaviour”.

The US president’s administration has already put sanctions in place on more than 970 Iranian individuals and entities, according to the US State Department.

“It is not a crisis yet, but it is a dangerous situation,” he told the event in New York.

But Zarif also suggested possible cooperation with Washington to bring stability to Iraq and Afghanistan, and said Tehran was open to negotiating a prisoner swap deal, pointing specifically to the case of British-Iranian aid worker Nazanin Zaghari-Ratcliffe.

Ratcliffe, who has been held in Iran since 2016, could be swapped for an Iranian woman currently held in Australia for the past three years on a US extradition request, Zarif said.

“Let’s have an exchange. I’m ready to do it and I have authority to do it,” he added. 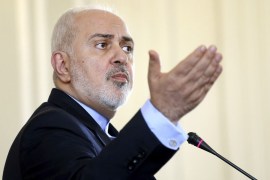 Zarif slams US silence on mass executions in Saudi Arabia 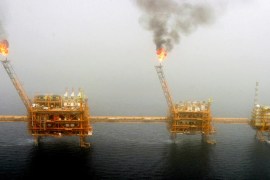