A Japan court ruled on Friday that Carlos Ghosn will remain in detention until April 22, as prosecutors grill the former Nissan boss over allegations of financial misconduct.

The 65-year-old will be held in custody at a detention centre in Tokyo until then, whereupon authorities will either have to press formal charges, release him or rearrest him if they feel he has other accusations to answer for.

Prosecutors are looking into allegations that Ghosn syphoned off some $5m from funds allegedly transferred from Nissan to a dealership in Oman and spent the money on a luxury superyacht.

Ghosn has not been formally charged over these allegations.

But the tycoon does already face three separate charges. Two of them relate to millions of dollars in salary believed to have been concealed from shareholders. The third charge is that he sought to shift personal investment losses to company books.

Ghosn denies all allegations and lashed out in a video message – shown on April 9 – at what he termed a “plot” by “backstabbing” Nissan executives scared of closer integration with French partner firm Renault.

Ghosn‘s wife Carole has increasingly become a key figure in the case and was questioned by authorities on Thursday.

According to a source close to the matter, some of the $5m for the yacht was funnelled to a British Virgin Islands-listed company – which has Carole Ghosn registered as president.

The case has bewitched Japan and the business world since the tycoon was arrested out of the blue at a Tokyo airport on November 19 and whisked off to the detention centre.

He spent 108 days in an initial period of custody, in conditions he said he would not wish on his “worst enemy”, deprived of his watch, forced to sleep with the light on and forbidden from contact with his loved ones.

He then won bail, stumping up $9m for his freedom and submitting to strict bail conditions including not using the internet or contacting anyone connected to the case.

But in another twist, he was then rearrested in a dawn raid for more questioning.

His lead defence lawyer, Junichiro Hironaka, has filed an appeal to the Supreme Court but warned it would not be a fast process.

Once hailed as Nissan’s saviour, Ghosn is fighting to restore his reputation as the firm says an internal investigation uncovered “substantial evidence of blatantly unethical conduct” by the former boss.

He was removed almost immediately from the head of the company and later resigned as boss of Renault as he fights the allegations.

Nissan shareholders have also removed him as a board member.

His lengthy detention has sparked some criticism of the Japanese justice system, derided by some as “hostage justice” as suspects can be held for a long time without formal charges.

Ghosn has said his lawyers have voiced some doubts over whether he will receive a fair trial. Almost every case that comes to trial in Japan results in a conviction. 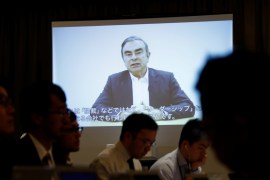 Ex-Nissan boss Ghosn says he is victim of ‘backstabbing’ plot

Carlos Ghosn accuses Nissan executives of conspiracy, and says in video he is ‘innocent of all the charges’. 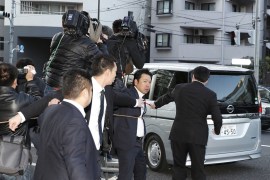 Ex-chairman Ghosn removed as director from Nissan’s board

Thursday’s arrest, which Ghosn termed ‘outrageous and arbitrary’, came less than a month after he was released on bail. 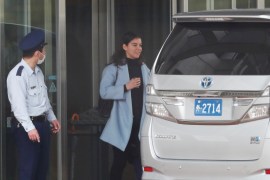 Carlos Ghosn, who has been in a detention for more than 100 days, released from Tokyo jail after posting $9m bail.