Amid much fanfare, Prince Mohammed was greeted on Sunday by Prime Minister Imran Khan at the Nur Khan airbase, where he was accorded a 21-gun salute for his first visit to the country since becoming heir to the throne in 2017.

The two leaders held direct talks in Islamabad, followed by the signing of investment deals in the areas of petrochemicals, energy, minerals, sports and other sectors.

At a state dinner in honour of Prince Mohammed, Khan hailed the strong ties between the two allies, adding: “Pakistan and Saudi Arabia are now taking this relationship to a level, which we never had before.

“A relationship where it will now be investment between the two countries which will mutually benefit from it.”

“We believe Pakistan is going to be a very important country in the coming future, and we want to be part of that,” he said.

The crown prince, who wields tremendous influence and power over policy in Saudi Arabia, valued the deals signed on Sunday at $20bn.

Those agreements include plans to build an oil refinery and petrochemical complex in the southern port city of Gwadar, the possible acquisition of two liquified natural gas-powered power plants by Saudi companies, and up to $4bn in alternative energy and mining deals, analysts and the chief of Pakistan’s Board of Investment told Al Jazeera.

Security was tightened across the Pakistani capital on Sunday for the crown prince’s visit.

Checkpoints were set up across Islamabad, with mobile phone signals restricted in certain areas. Saudi and Pakistani flags flew throughout the city, alongside portraits of Khan and the crown prince.

Prince Mohammed stayed at the Prime Minister House, a lavish government-owned residence that Khan has refused to occupy since his election last year in an effort to cut government expenditures.

The crown prince is expected to fly out from Islamabad on Monday, after meeting the Pakistani army chief, General Qamar Javed Bajwa, and President Arif Alvi. Visits to India and China are next on his itinerary as part of his three-country Asia tour.

In addition to key members of his cabinet, including Petroleum Minister Khalid al-Falih, the crown prince was accompanied by a number of Saudi businessmen, who are expected to hold meetings with Pakistani counterparts ahead of a planned investor conference.

Haroon Sharif, head of Pakistan’s Board of Investment, said he expected technical feasibility studies to begin immediately and take up to 18 months.

“All of these projects are of medium- to long-term,” he told Al Jazeera.

“The memorandums of understanding are just the beginning. The real test is when the technical analysis starts.”

‘We cannot say no’

At the state dinner, Khan publicly requested the crown prince to allow Pakistani pilgrims to Islam’s holiest sites for the annual Hajj pilgrimage to undergo immigration procedures on departure, rather than on arrival in Saudi Arabia.

He also asked the prince to facilitate the more than 2.5 million Pakistanis who reside and work in Saudi Arabia, as well as the over 3,000 Pakistani prisoners in Saudi jails.

“Sometimes they face hardships, and we would like you to look upon them as your own people,” he said.

Prince Mohammed responded by saying the request would be considered.

“Mr prime minister, just consider me in Saudi Arabia as the ambassador of Pakistan … We cannot say no to Pakistan, and whatever you need we will try to do something about it,” he said.

After the one-on-one meeting between the two leaders, the Pakistani government announced the formation of a new Supreme Coordination Council, meant to oversee implementation of agreements in the areas of politics, security, the economy and social issues.

Analysts say the announcement of the investment deals and diversification of Saudi’s relationship with Pakistan is consistent with the crown prince’s Vision 2030 policy, which foresees the Gulf kingdom attempting to diversify both its economic and political relationships beyond oil agreements.

“The changing situation is that Saudi is now in this diplomatic offensive, not just with Pakistan, but with India and China, too,” said Zahid Hussain, an Islamabad-based analyst.

“So that shows that Saudi royalty wants to diversify its relationships abroad. The signal is quite clear.” 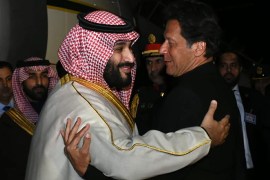 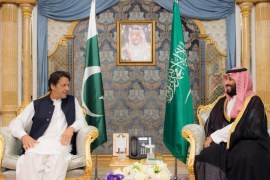 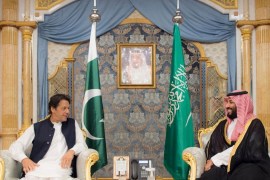 Originally scheduled for Saturday, Prince Mohammed’s arrival in Islamabad has been delayed by a day.