“Dire” is a word no country – and no people – want associated with their economy. And yet it feels inadequate when describing the economic crisis in Venezuela.

A lack of macroeconomic transparency on the part of the government of President Nicolas Maduro has made it difficult to accurately gauge the extent of the country’s woes.

According to the IMF, Venezuela’s economy is thought to have contracted by more than one-third between 2013 and 2017. Last year, it is estimated to have shrunk 18 percent. Compounding the pain is hyperinflation, which the IMF says could top 10 million percent by the second half of 2019.

Beneath that almost unfathomable number is a procession of profound human misery. Some three million people have fled Venezuela since 2015, according to the UN. The public health system is in ruins. Life-saving medicines, electricity and clean water are in short supply. Food is scarce. Malnutrition is widespread.

Now the country is in the grips of a political crisis that has divided the world’s major powers and highlighted competing narratives over what drove Venezuela’s economy to ruin.

Western nations, led by the United States, have thrown their support behind self-proclaimed interim President Juan Guaido. Russia, China and Turkey are standing by Maduro who has vowed to remain in power for a second, six-year term despite accusations of widespread election fraud.

Maduro has accused the US of waging economic war against his socialist government. But many economists and energy experts fault Maduro’s policies and those of his predecessor, the late President Hugo Chavez, for destroying the economy.

One thing that is not in dispute is the pivotal role oil has played.

Venezuela has the largest proven oil reserves in the world and the government depends on crude exports for the lion’s share of its income and foreign currency.

Like many petrostates, Venezuela has struggled to diversify its economy, leaving it vulnerable to boom-bust cycles.

When oil is expensive, government coffers overflow. When it’s cheap, they empty.

Rising crude prices in the 2000s helped the late president, Hugo Chavez, make good on his pledge to harness the nation’s oil wealth to fund welfare programmes aimed at redressing inequality and poverty.

But when oil prices started to plummet in 2014, the new government of his successor, Maduro, was ill-prepared to absorb the blow.

That was especially true of the country’s oil sector. When Chavez took power, Venezuela pumped roughly 3.5 million barrels of oil per day. Production has since collapsed to less than one-third of that.

Oil is a capital-intensive business. To secure future production, Venezuela needed to reinvest an adequate portion of windfalls from flush years into its state-owned oil company, Petróleos de Venezuela, or PDVSA.

Chavez failed to do this. His policies also gutted the sector of vital expertise.

“If you talk to experts who have long worked on and followed the oil sector in Venezuela they will tell you there was significant technical expertise in the past and those experts are just not there any more,” said Garcia Tufro.

The economy was already on a downturn when Maduro took power, leaving him with the unpalatable option of either dramatically slashing welfare spending or running fiscal deficits.

He chose the latter.

When inflation and shortages led to mass protests against his government, the violent crackdown he unleashed in response led the US to impose sanctions in 2014 targeting individuals accused of human rights violations.

In 2017, the administration of US President Donald Trump turned up the heat with sanctions designed to restrict trade in Venezuelan bonds, which effectively locked the country out of credit markets.

Venezuela has since defaulted on various debt instruments. Restructuring is unlikely to happen anytime soon and Moody’s Investor Service noted in its latest report that US sanctions have undermined the Maduro government’s “ability to renegotiate its obligations”.

In 2018, the Trump administration took aim at Venezuela’s gold sales. But the most significant escalation to date took place on Tuesday with the announcement of sweeping sanctions on PDVSA.

US National Security Advisor John Bolton said the new measures would, “help prevent further diversion of Venezuela’s assets by Maduro, and will preserve these assets for the people of Venezuela where they belong”.

A UN report published last year by former UN Special Envoy Alfred de Zayas blamed US sanctions as well as measures by the EU and Canada for aggravating shortages of food and medicine and contributing to “many deaths”.

But some argue the US has carefully deployed sanctions to deny Maduro a scapegoat for the country’s economic problems.

“Venezuela has had no one else to credibly blame for the last few years and the United States did not want to bail out the Maduro regime by giving it the argument that the United States was responsible,” he added. 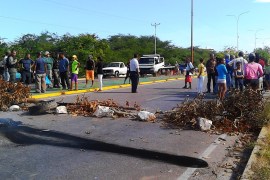 My life in crisis: Diary of a Venezuelan journalist

How Venezuela’s economic crisis has turned basic tasks like food shopping and commuting into feats of endurance. 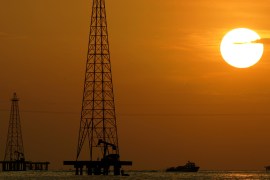 What led to the economic collapse of Latin America’s richest country?