By By Julie Johnsson and Richard CloughBloomberg

Dennis Muilenburg was ousted as chief executive officer of Boeing Co., a once-unthinkable turning point for a U.S. industrial champion engulfed in turmoil after two deadly crashes of its top-selling 737 Max jetliner.

David Calhoun, a General Electric Co. veteran who had served as chairman since October, will replace Muilenburg as CEO and president Jan. 13, Boeing said in a statement Monday. The move followed a rare public rebuke Dec. 12 by the U.S. Federal Aviation Administration. Just last week, Boeing said it would temporarily halt output of the Max, which has been grounded since March.

Boeing is trying to regain its footing amid the Max grounding, one of the worst crises of the modern jet era. The planemaker’s reputation and finances have been battered after the Max disasters killed 346 people and prompted the worldwide grounding. Boeing’s design decisions and cozy relationship with the FAA are being scrutinized by Congress while the Justice Department is conducting a criminal probe.

“A change in leadership was necessary to restore confidence in the company moving forward as it works to repair relationships with regulators, customers, and all other stakeholders,” Boeing’s board said in the statement. 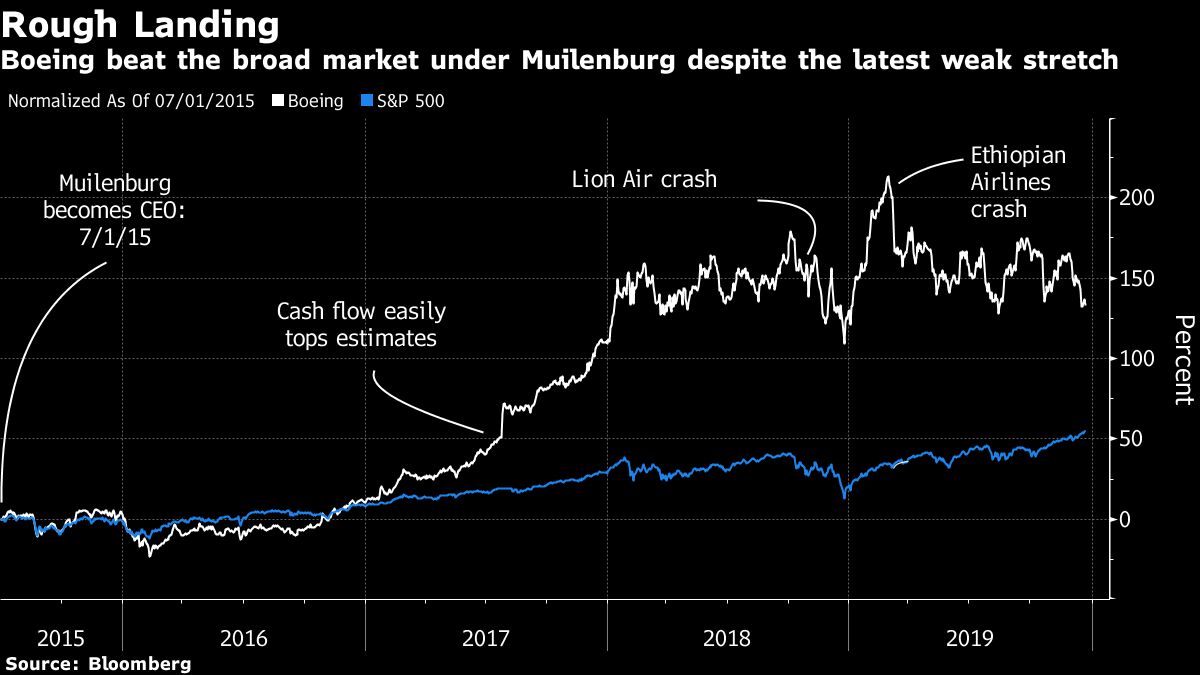 Calhoun, 62, senior managing director and head of portfolio operations at Blackstone Group Inc., now faces the daunting task of extricating Boeing from one of the bleakest chapters in its 103-year history. He will exit his non-Boeing commitments, the company said.

“I strongly believe in the future of Boeing and the 737 Max,” he said in the statement. “I am honored to lead this great company and the 150,000 dedicated employees who are working hard to create the future of aviation.”

During more than two decades at GE, Calhoun ran the company’s jet-engine and lighting businesses. Calhoun has been mentioned in years past as a contender for the Boeing CEO job.

Muilenburg’s departure caps an extraordinary fall from grace for an Iowa farmer’s son who had dreamed of turning Boeing into a globally admired corporate paragon, much as Jack Welch did for GE. For two years as CEO, Muilenburg seemed to have the Midas touch. Then a brand-new Lion Air 737 Max plunged into the Java Sea on Oct. 29, 2018.

While the plane’s design was largely set before Muilenburg became CEO, he bore responsibility for the company’s initial muted response – and the media firestorm that ensued when a second Max crashed less than five months later in Ethiopia. He would later describe the Max tragedies as the most difficult moments of a career spanning more than three decades, all at Boeing.

The development of the Max is under investigation by the U.S. Department of Justice and Congress. A high-ranking Boeing pilot working on the 737 Max three years ago during its certification expressed misgivings about a feature since implicated in the crashes, calling its handling performance “egregious,” according to 2016 messages revealed Oct. 18.

Muilenburg joined Boeing from Iowa State University as an intern in 1985. Over the next three decades, the aerospace engineer rose to increasingly prominent positions at the defense business of the Chicago-based manufacturer. As head of the division, he drove deep cuts to maintain profits when Pentagon spending was stagnant.

He succeeded Jim McNerney as CEO in mid-2015 amid the biggest sales boom in aviation history, fueled by low interest rates, readily available financing and the rapid expansion of low-cost airlines, particularly in Asia. Boeing’s 787 Dreamliner started generating cash months after Muilenburg took office, after a decade of losses. The plane, along with the highly profitable 737, funded the increasingly generous returns the company lavished on investors.

An avid cyclist fueled by diet Mountain Dew, the whip-thin Muilenburg brought an unapologetic, hard-charging edge to Boeing. “Compete to win,” became a company mantra. He demanded deeper discounts from suppliers while creating new businesses that poached sales from its partners in everything from cockpit electronics to the mini jet engines housed in an aircraft’s tail.

But the hard-nosed approach came back to haunt Boeing and its CEO. Responding to a preliminary accident report about the Lion Air crash, the company infuriated the carrier, one of its largest Max customers, by highlighting maintenance miscues on the doomed aircraft.

“Not apologizing directly and immediately was seen as a misstep,” said aerospace analyst Richard Aboulafia.

In addition, Boeing shocked pilots around the world after the accident when it revealed that an obscure flight-control subsystem known as Maneuvering Characteristics Augmentation System played a role in the accident. While the company had described MCAS to Max operators, it had removed references from flight-crew manuals. The Lion Air pilots had no knowledge of the system, which was tripped by an erroneous sensor reading and then shoved the plane’s nose down more than 20 times until they lost control.

Regulators worldwide began grounding the Max hours after the March crash of an Ethiopian Airlines jet, even as Boeing’s leaders and the FAA stood by the plane and recommended more investigation before taking action. In the aftermath, Muilenburg sent a message to employees saying he was “confident in the safety of the 737 Max.”

His tone changed over the following weeks and months. “We’ve learned from both of these accidents,” Muilenburg said in an interview in September. “We’re humbled, and learning, but we’re also confident. We know we have a great company with great people.”

Boeing’s problems snowballed as additional problems arose and regulators expanded their review of the Max beyond MCAS. There was the revelation that a cockpit light that might have alerted the crews to the sensor malfunction was inoperable in most Max jets because of a coding error. While Boeing had known of the issue for more than a year, it didn’t alert the FAA or airlines until after the Lion Air crash.

As the grounding dragged on, Boeing faced the logistical challenge of storing hundreds of factory-fresh planes while keeping cash-strapped suppliers afloat. Fairly or not, the company’s laser focus on cash and costs reinforced a narrative that it had been lax on safety.